So, my wishes last night for the rain to hold off, were not granted. I heard light rain on my tent throughout the night. When we packed up in the darkness, I could see light drizzle floating in front of my headlamp. I assumed we were in a cloud and that we’d just hike out of it as the morning continued…unfortunately, not in this case. We hiked in cold drizzle and fog for a good 5hrs this morning. After that, it was foggy and misting on and off. We were okay, as long as we kept moving, but it was very unenjoyable. I love seeing the fog, but I would love to have that without the freezing cold rain. I managed to stop long enough to take a few pics. 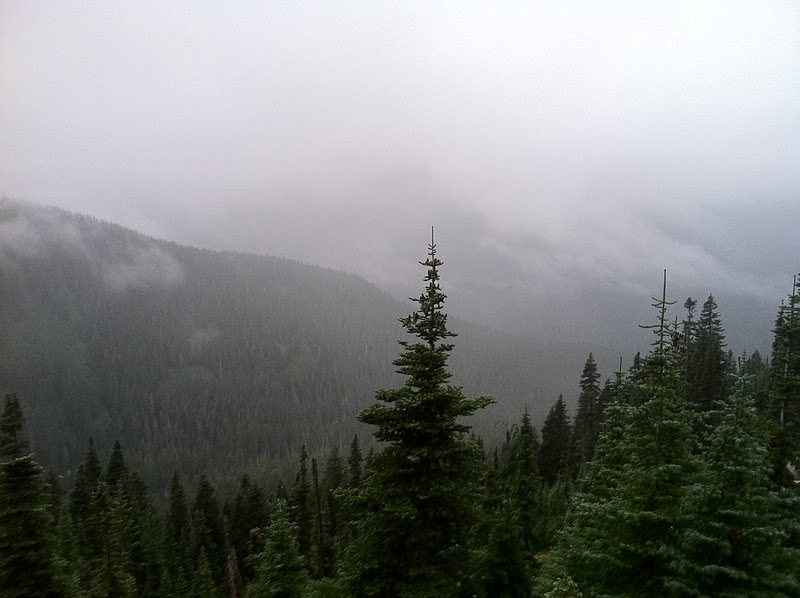 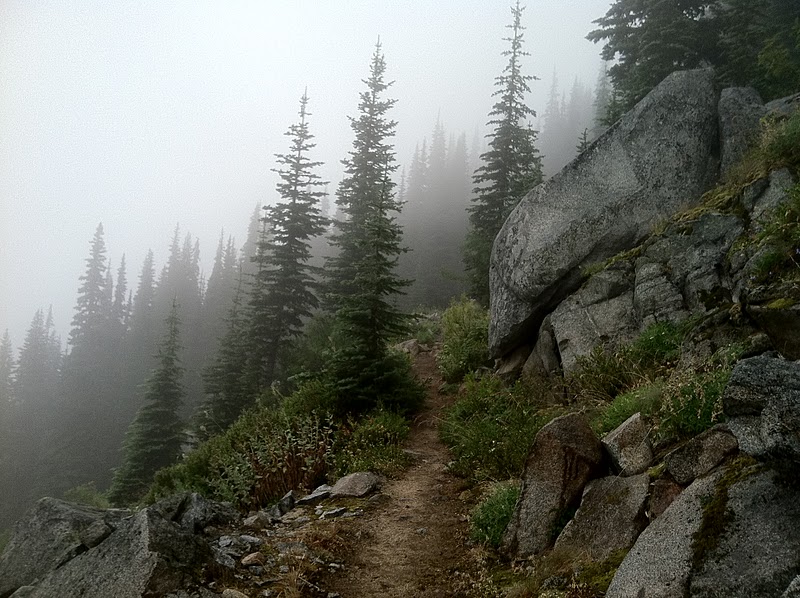 Both Yankee and I are still wearing our mesh trail running shoes and our feet were pretty soaked and cold. That is by far the worst part. I am now regretting not buying the “waterproof” Gortex version of my shoe for the end of my hike. I have found that if I keep moving, all the water in my shoes stays warm, so that helps. The worst for me is when we walk through the parts of the trail with a lot of overgrowth that soaks us. It’s like someone is just pouring cold water on you as you brush up against the plants and then my feet feel like they are in ice cold water again. Yep, not fun at all and that isn’t even the worst of what I know Washington can do. This rain was unexpected from the forecast I heard and the current outlook is that tomorrow will be okay until the evening and then rain will come in for two days and then clear up. If two days is all we get the rest of this hike, I will be so thankful! I know they won’t be fun, but knowing it’s temporary makes it more bearable. 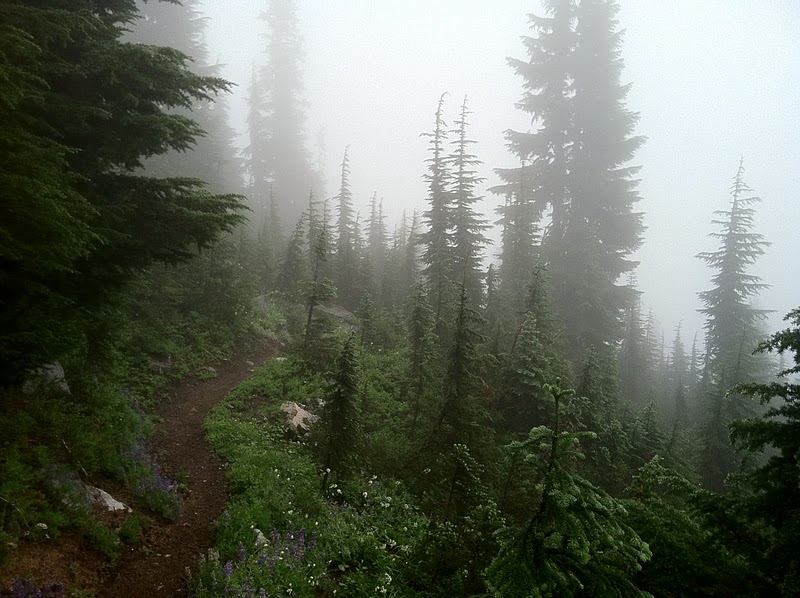 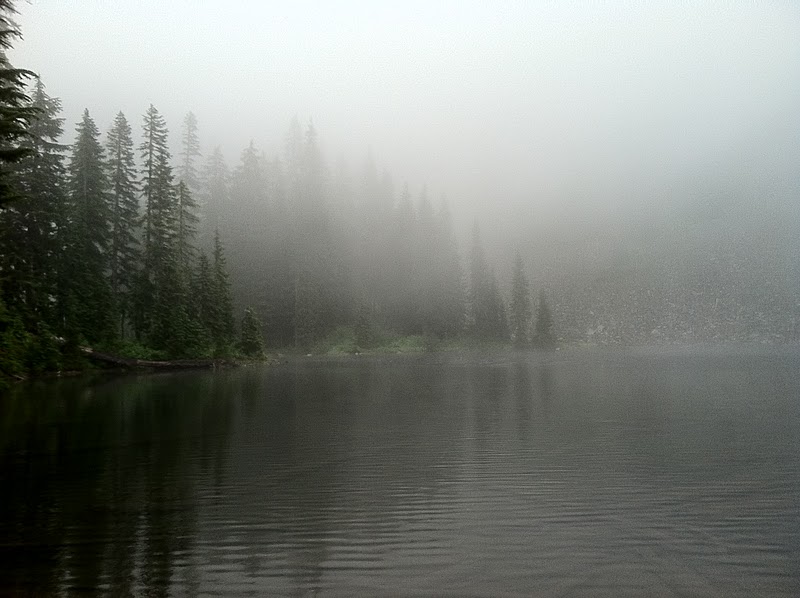 As for today, we had a 23.5mi hike to Stevens Pass and, luckily, our final trail angel stop. I had a package at the post office to pick up before 3:45pm, so I had to book it and went ahead of Yankee and we agreed to just meet up later at the local Inn. We had heard that at the trail angels, the Dinsmore’s, hikers camped outside, so I called Andrea Dinsmore to let her know we were thinking of staying at the local Inn because we were so cold and wet. She told me they had a full indoor dorm area for hikers and that, “there’s a spot waiting for ya, if you get your ass down here!” Yep, that sealed it, I had to meet this woman! I jogged a lot of the trail (also to stay warm) and made it to the road at 2:30pm. That’s awesome that I was able to do 23.5mi by then! I saw a truck with an open back bed as I walked off and immediately hoped for trail magic. The car door opened and out stepped Cow Pie! I was floored! I was not expecting trail magic, much less from someone I knew! Cow Pie is a section hiker from Seattle who I overlapped with in Southern Oregon on Days 111 and 115 . He has been following my journal ever since. He decided to do trail magic this weekend and hoped to catch me coming out. What luck! This trail really is amazing! When I looked into the back of his truck, there was a ton of food and coolers. I immediately zeroed in on the Chips Ahoys and he said he got those for me. Way to go Cow Pie! Of course, I had to photograph the occasion. 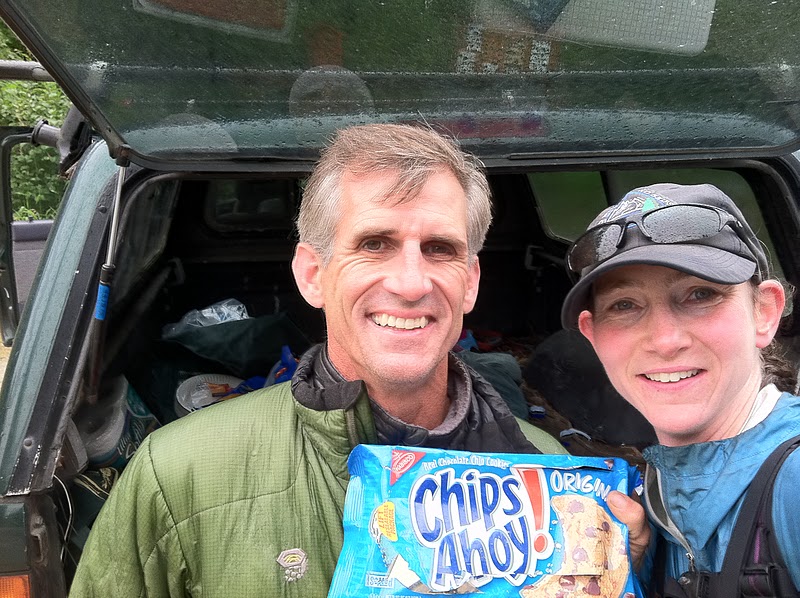 Cow Pie offered to take me to the post office and then come back to get Yankee. We left Yankee a note in the coolers and figured he’d be there when we got back. We returned and Yankee wasn’t there. He had given me the wrong phone number, so I called the Inn to see if he had somehow hitched in while we were gone. He had and then we went to get him and head to the Dinsmores one town over. It is great at the Dinsmores Hiker Haven. They have a whole room for hikers with anything we’d ever need, showers, laundry, Internet, etc. It’s difficult to get the two of them in one spot, so I’ll probably have a picture with them tomorrow. I was excited to get a computer to be able to post the good version of my pics from this last leg. We are currently here with two hikers, Colin and Bookworm. After months of seeing his name in registers, I finally got to meet Bookworm! He is going to hike out with me and Yankee tomorrow. 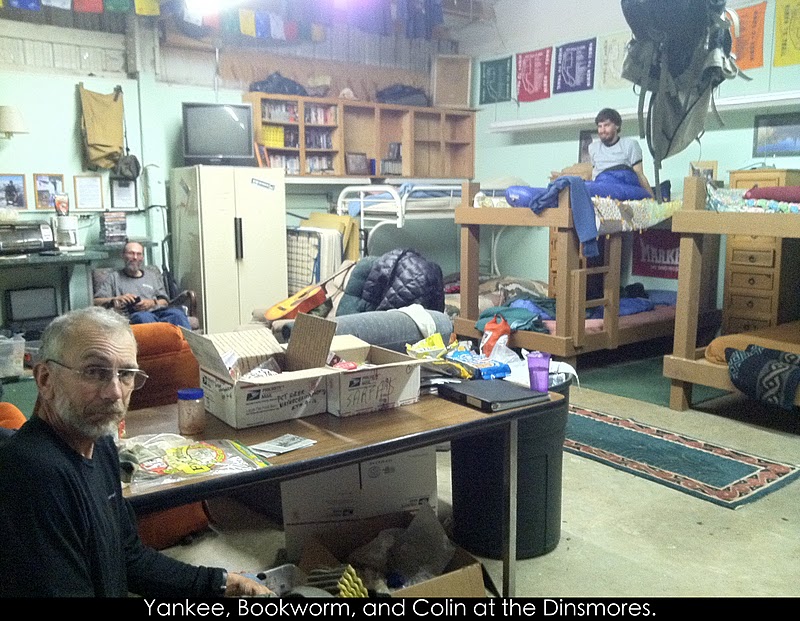 By the time this entry comes out, it will be my step dad’s birthday. I thought I’d wish him a happy birthday while lounging in the recliner at the Dinsmores. Happy Birthday Mark!

I am currently up way too late (almost 1am) getting my journals posted. Reception as I go north is going to be spotty, so it may take some time to post, but they are coming! I heard there is wi-fi in my last trail town of Stehekin which is four days from now. My last trail town is in four days! Can you believe it!? Just a reminder that the remainder of my posts may have fuzzy pictures since they will not be sent from a computer, but I’ll fix that as soon as I get home. Movin’ on!