I didn’t set an alarm for the first time on the trail today. I knew I’d hear Rockin’ getting ready nearby. The beginning of the day had a lot of uphill, so we decided that Rockin’ would get a head start and I’d catch up. I left 45mins after she did at 6:30am and caught up by 8:30am. The trio we camped with was still asleep when I left and we didn’t see them today. The terrain was pretty consistent today as we were in a forested area that had a pretty rocky trail in some places. Like yesterday, I only took five pictures because the terrain was so repetitive. I just love the forest and it was vastly different from the exposed sunny roads we had yesterday. The morning started off with steep ups and downs in the forest and I was in the zone! The trail was great and my thigh is almost fully healed. It has a slight soreness, but I’m finally able to get my full stride and rhythm going. It felt really good. 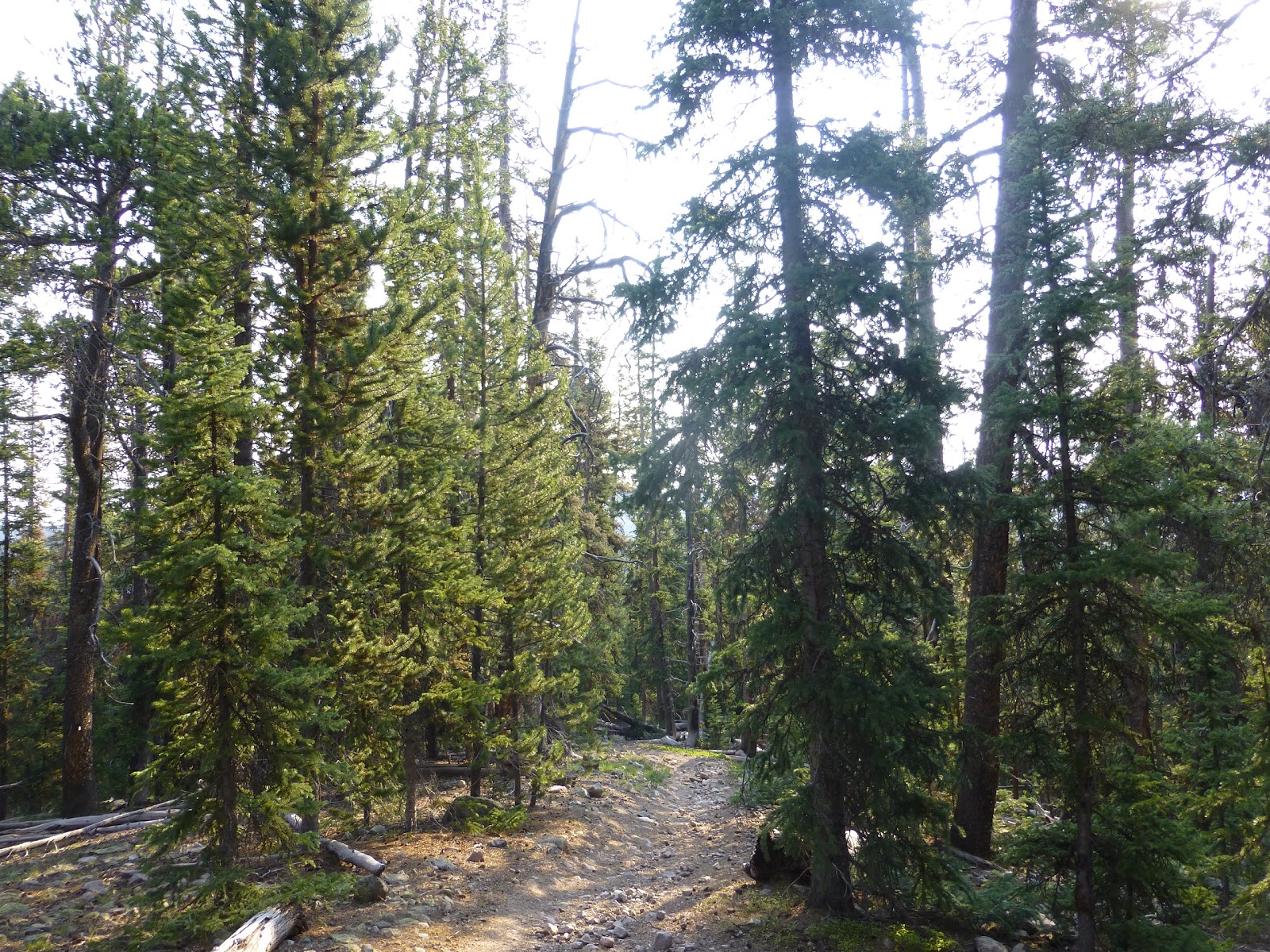 I also got service for the first time on this leg and so did Rockin’. I wasn’t able to post my blogs and that was frustrating, but I did get my emails loaded and I got to talk to my sister and nephew.  When I did read my emails, I found out that one of them was a notification that Sam Hughes, the trail angel that took us to the border, passed away. I don’t know much other than that he was in his mid 80s and was very sick with melanoma. He died in Texas while visiting his son and was an inspirational man. It was very special to start the trail with him and I hope to be as active as he was when I reach his age. Here is a picture I’ve posted before in memory of Sam Hughes. There are more pictures and info on Sam on my Day 1 post and the day before that.

Once I did catch up to Rockin’ it was apparent that we were not in the same zone. I was feeling good and wanted to speed on ahead, but we are sharing gear and I needed to stay close. I went ahead and immediately hit unexpected water and since I had the filter, I stopped and waited for Rockin’. After that, I knew it was close to lunch, so I tried to stop at the top of the hills so that I didn’t get too far ahead if Rockin’ was ready for lunch. Rockin’ soon let me know how unmotivating it was for me to be sitting at the top of every hill so I stayed back and sat for awhile and let her go ahead so I wouldn’t be right behind her. Here is a picture of Rockin’ at one of our highpoints. 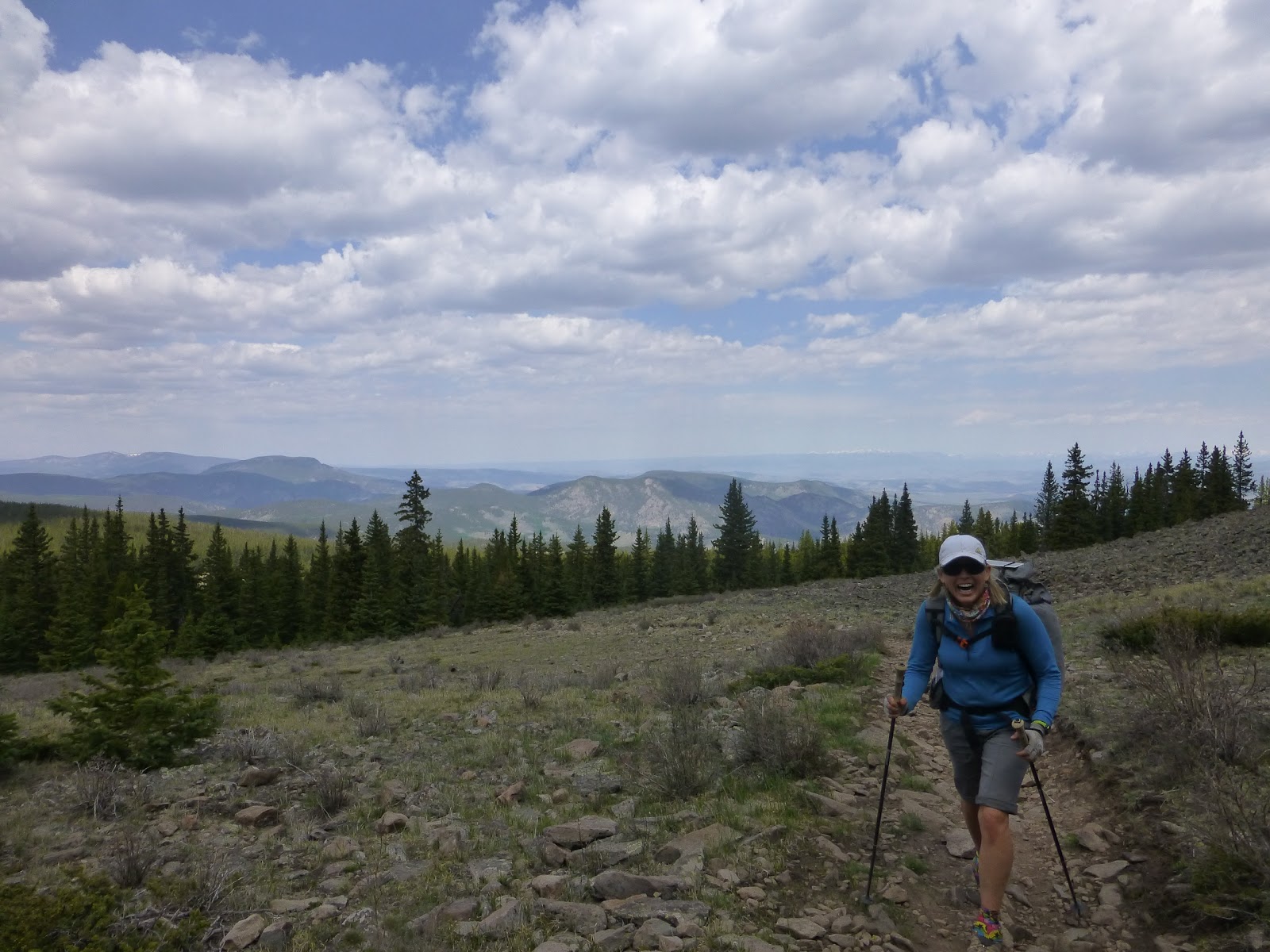 It’s difficult because I feel good when I can get my rhythm and stride going, but shortening my stride or stopping a lot gets me really wound up and out of sync. Then I’m all out of wack and it goes to my stomach cause if I’m uncomfortable it usually goes to my stomach. It’s just difficult to find compatibility on the trail, but I’m still hoping to find a way to adjust. Once we had lunch, I decided to stay close because clouds had gathered and thunder rumbled every so often in the distance. It wouldn’t be a good idea to be separated in a storm. 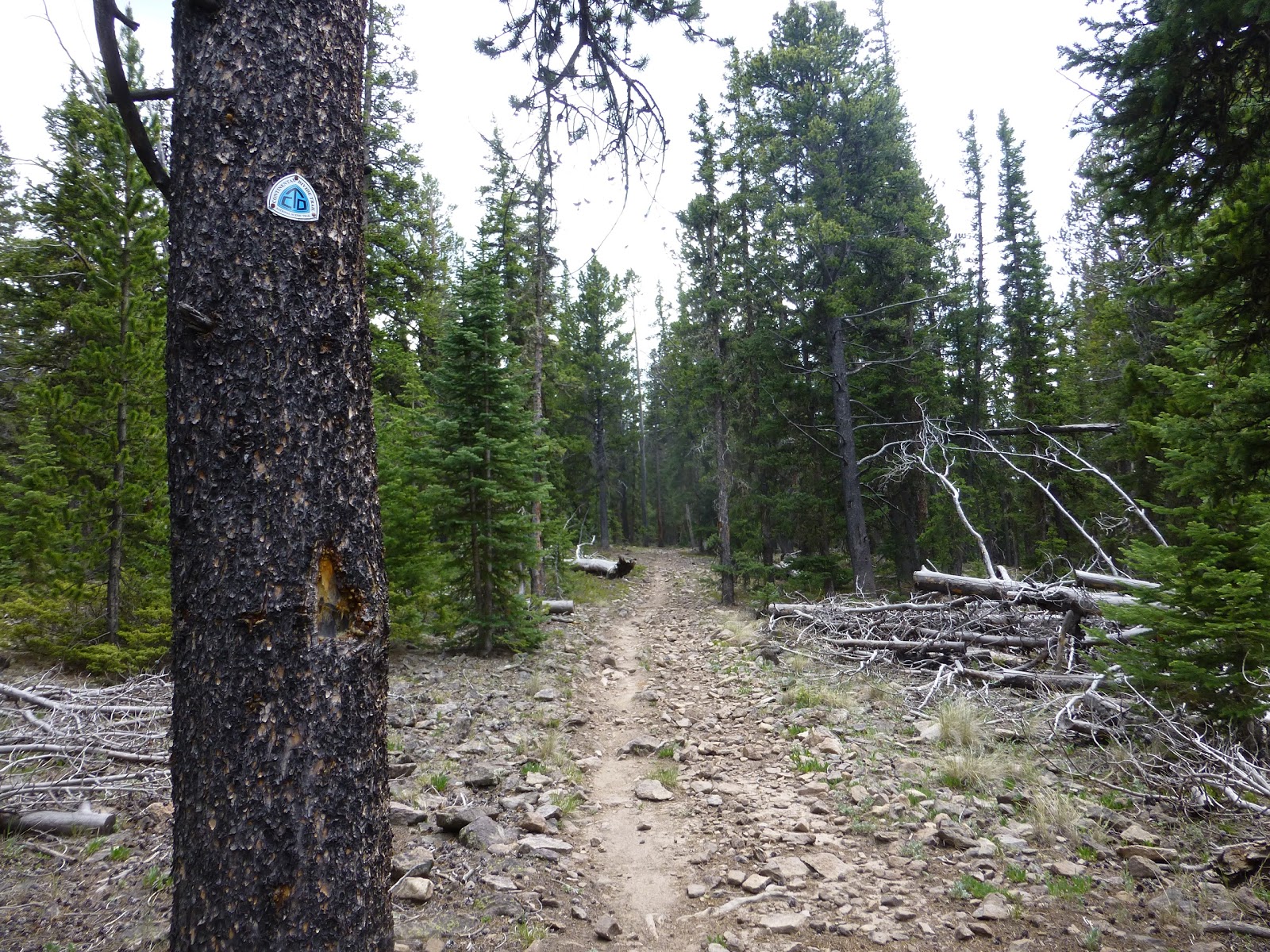 I shortened my stride for the afternoon and the clouds continued to gather as the temperature dropped into the 60s. Mosquitoes are definitely out and would swarm if we stopped for any amount of time. I have a handful of bites, but the mosquitoes are more hovering than biting so far, so I can go with shorts and be okay. We hit the rocky, rooty trail and it made strides pretty impossible. 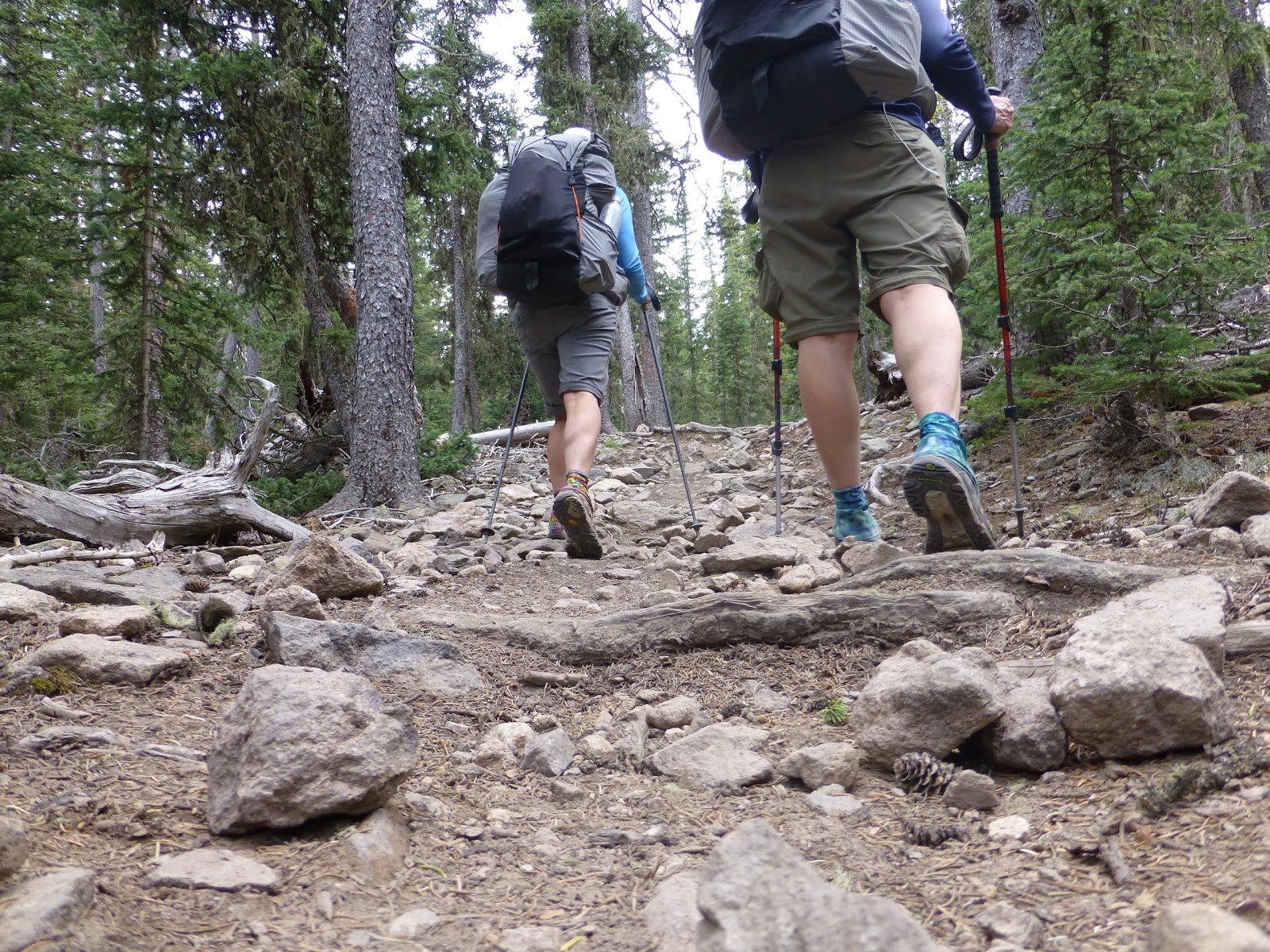 I hardly listened to my MP3 player at all today as I tend to be pretty entertained in the forest. We hit a couple of meadows with views toward the end of the day. 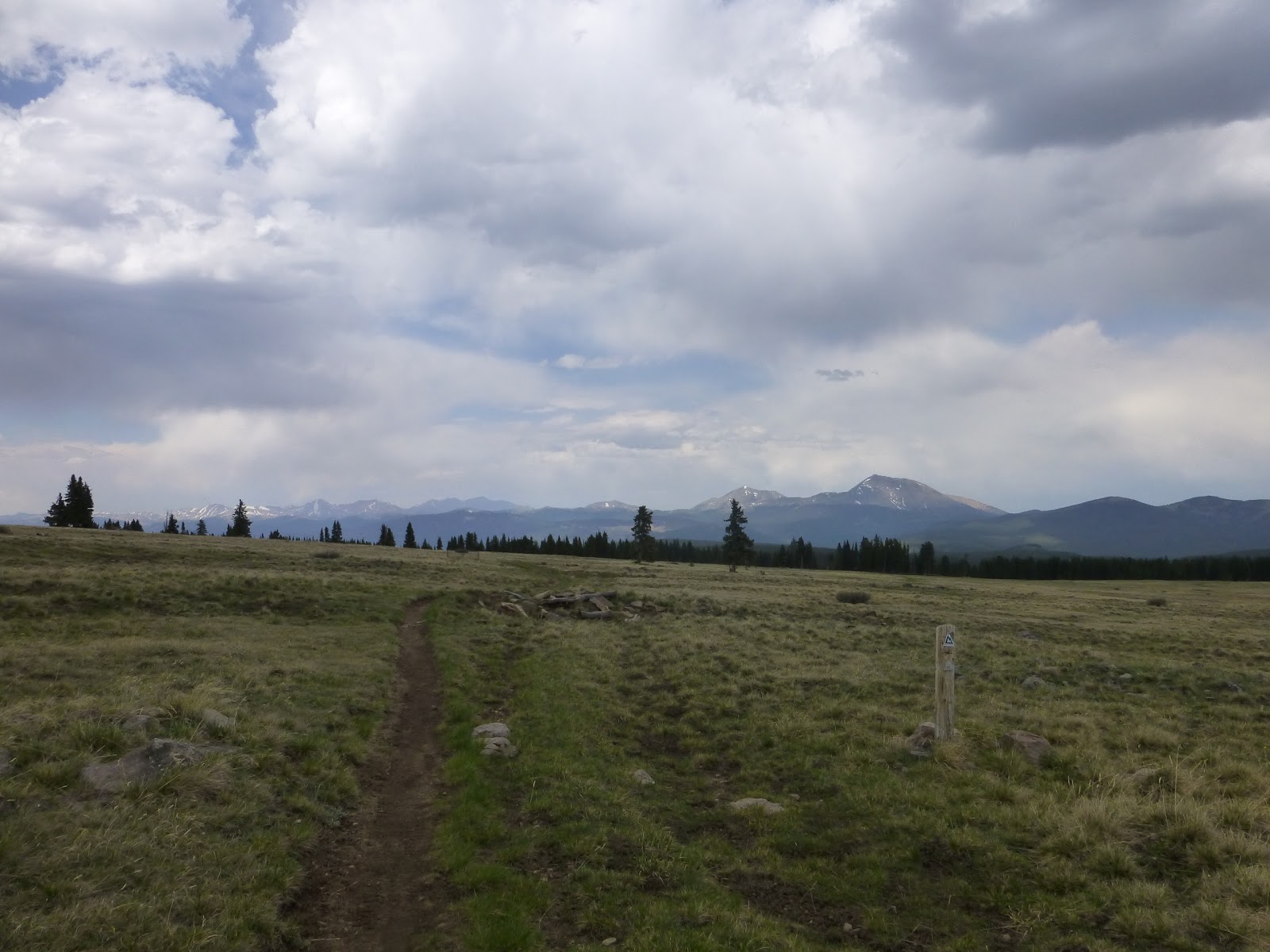 With a couple miles to go to a water source at the end of the day, I went ahead to start filtering water to save time. It was about 5pm and Rockin’ decided to have dinner before hiking on. The sun had been breaking through just before we got to the stream and Rockin’ said I could hike on since it was clearing and she knew I was concerned about the rain and separating during the day. No joke, one minute after I walked away, it started to sprinkle. I was so pumped about continuing my stride that I had going before the water source that I dismissed the light sprinkles and continued to hike up the hill. Within 20mins, I heard thunder rumbling closer than it had all day. I was on a steep traverse and sped up to make it to where the trail plateaued a mile or so further. I got to where it leveled out and there was great protected flat spots in the woods. As I set up the tent, lightning and thunder became more frequent and louder. Soon after I got the tent up, it rained a bit harder for about 10mins and I sat it out in the tent. After the rain cleared, Rockin’ came and said it rained harder down below, but that she waited it out under a tree and was fine. Of course, after a whole day of sticking together with the eminent rain, we finally separated and a thunderstorm hits. It was quick and harmless and an entertaining end to an otherwise routine day. We are about 21mi from the pass tomorrow and might make it. We heard there is some snow ahead, but aren’t sure how much it will slow us down. Hopefully, there won’t be more rain. The worst part of the whole cloud thing for us is that we weren’t able to fully charge our phones with the solar charger we are sharing this leg. Hoping for some sun breaks tomorrow!