It was another great morning! It was warm enough overnight that I didn’t have to sleep in my down jacket or beanie and I didn’t need to zip my sleeping bag. We heard it’s in the 100s and 90s in towns around here and that is making 12,000ft feel just right for hiking where it isn’t freezing in the morning or night and warm enough for a t-shirt and shorts during the day. We started hiking at 6:15am this morning as it’s easier to get going when it’s warmer in the morning. Track and Field left at the same time and we immediately started with a 1,000ft climb to the top of Stanley Mtn. Track and Field have strides twice as long as me and Mtn Rat and I didn’t see them again try rest of the day. When we got to the top, reception was the best it’s been all trail! Mtn Rat called his wife and I answered some emails, but still couldn’t post blogs. I really am loving that I get reception more regularly now. I know it seems to be the opposite of my purpose out here, but it really make me happy and that’s why I’m Wired. It was really getting to me during the last half of Colorado and I’d have a lot piled up to do in town. Now I’m not falling behind so much. Anyway, we hiked on and went down 1,000ft to Berthoud Pass. This is US 40 and some hikers choose to hitch to a choice of Fraser or Winter Park to resupply. I think the crew is doing this. Mtn Rat and I decided to push through the 5 night/6 day leg to avoid the time and hassle of hitching and going to another town. We were delayering when a hiker exited the trail. Neither of us knew who he was, as he came from a distance straight to us and that is unusual, because there aren’t many of us out here and we tend to know where everyone is. The hiker walked up and said, “Hi Wired.” I really had no idea who it was and had to ask. It was Softwalker! We both did the PCT in 2011 and rode in a van together to the border. He is even in the group start photo I have with about 15 people at the border. In the brief time we overlapped, I found out he’s from Illinois too and right near where I went to college. After that, I never saw him again, but we both knew who each other were and that we finished the trail that year. He looked so different with a beard and hat that I didn’t recognize him at all! He hitched into town and we should end up in Grand Lake the same day. Such a small hiker world! 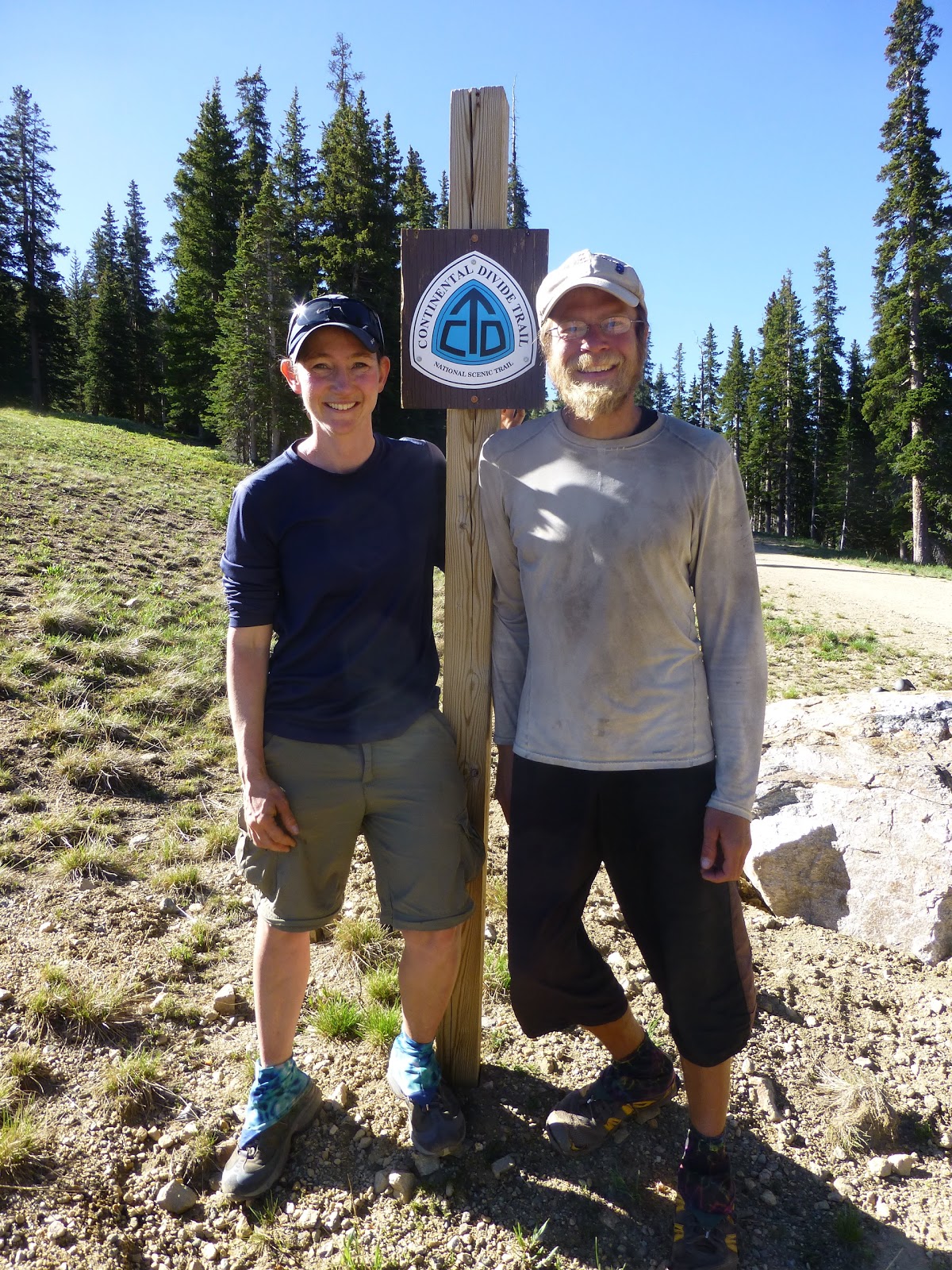 After the pass, we had a 1,800ft climb to the top of Mt Flora at 13,113ft . At the top, I was finally able to post the blogs from the last three days. That took awhile and Mtn Rat had an early lunch because he had decided to do an alternate route from Mt Flora that would possibly require some rock scrambling. It cut 7mi from the trail and reconnected later today. I’d say half the people take alternates like these, but I tend to like to stick to the “official route” because it is what I have waypoints for. Mtn Rat loves the adventure of the alternates and especially the idea of a rock scramble, so he was excited. We said our goodbyes and I continued blogging and making phone calls for a bit on top. Then, surprisingly, another hiker walked up. It was Estero who I thought was 1/2 day ahead of me and who I had yet to meet. He had gone into town and once I told him about the alternate, he went that way and Softwalker planned to go that way too. Again, I’ll probably see him in town too. He and Softwalker started the trail 11 & 12 days before me and have been enjoying the towns so that’s why I was surprised to see them. I thought they were well ahead of me. After my extended blogging break, I hiked on solo for the first time in awhile and I loved it! I like getting some solo time in and am looking forward to it the next few days. There is just such freedom in doing things on your own schedule and not worrying about holding anyone up. Today I reveled in it! I too breaks when I felt like it, made phone calls while I hiked, went to the bathroom without holding it or having to tell anyone else, ate a late lunch, and hiked til I felt like stopping. It’s pretty fun! I saw two sets of day hikers and one was a set of guys I talked to for awhile who were really enthused to see me out there on my own, so I want to give them a shout out!

As for the trail today, two things stood out. The rocky trail and the wildflowers. I was pretty annoyed by the trail most of the day today. Lots of loose rocky trail that fat ankle did not like and I put my ankle brace on for the first time in probably a month and will again tomorrow. Here are some pictures of the rocky trail today. It made me think the alternate may have been worth it! 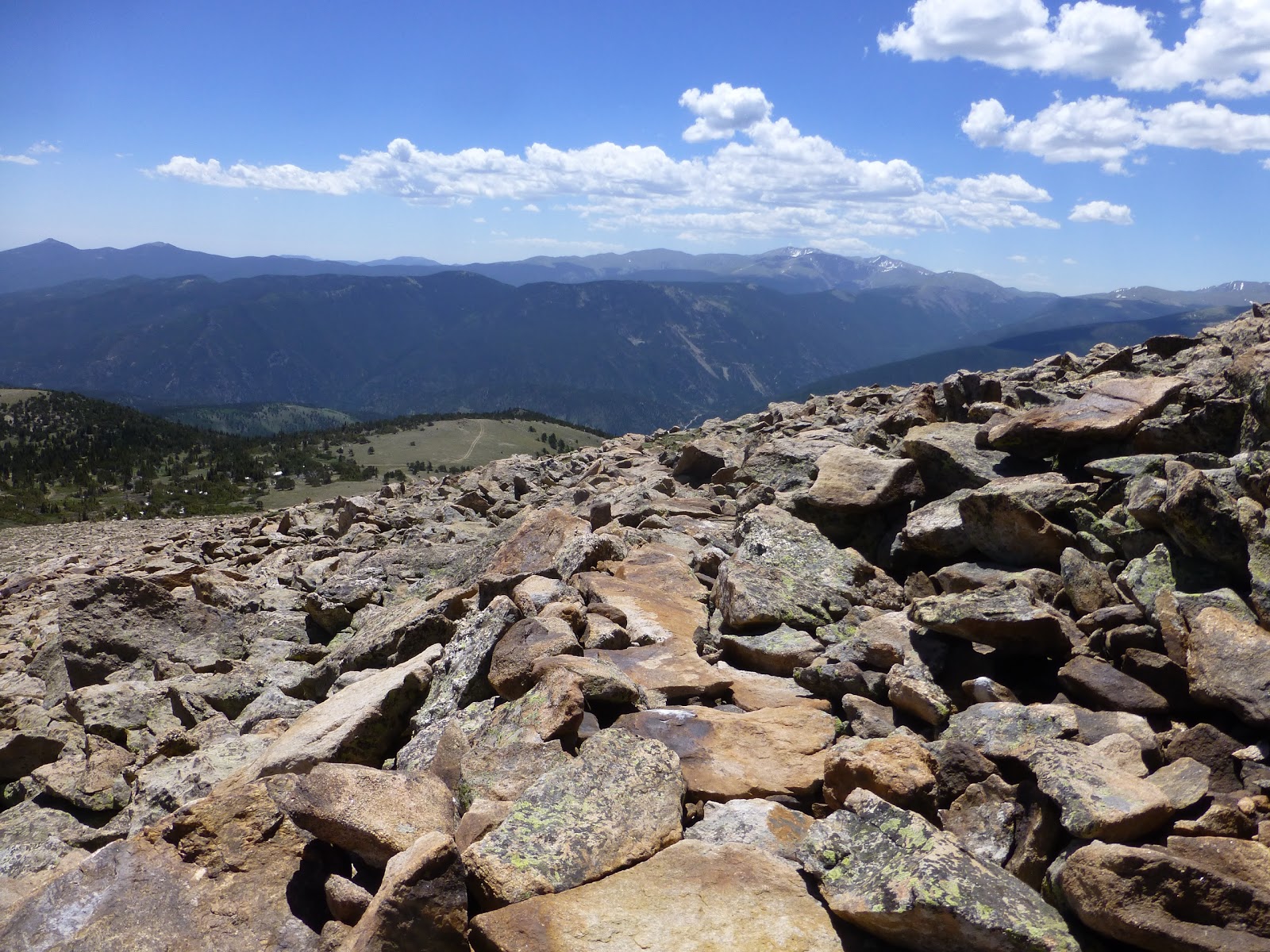 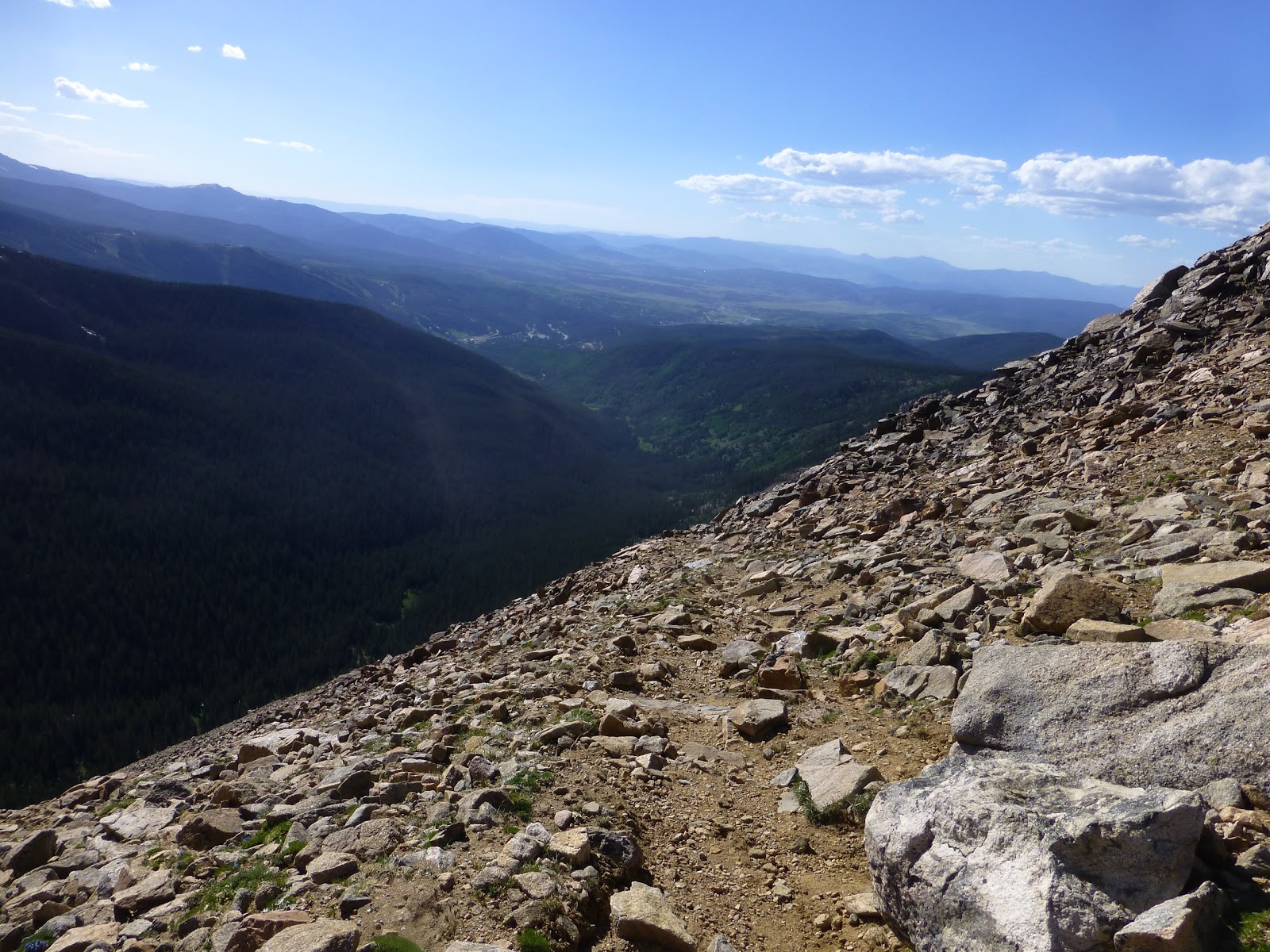 Mtn Rat texted me and seemed to have saved 2hrs of hiking so he is well ahead of me now. The route I took (and so did Track & Field) dropped 3,000ft and then climbed back up 3,200ft. It was the hottest it’s been in awhile when it dropped and it was tiring. The rocks just made it worse. The good news is that there are now a ton of different little wildflowers along the trail, so I had lots of cheerleaders in them today as they waved in the wind. I decided to take a picture of most of them and make some flower collages. It’s just amazing to me how many different flowers there are! 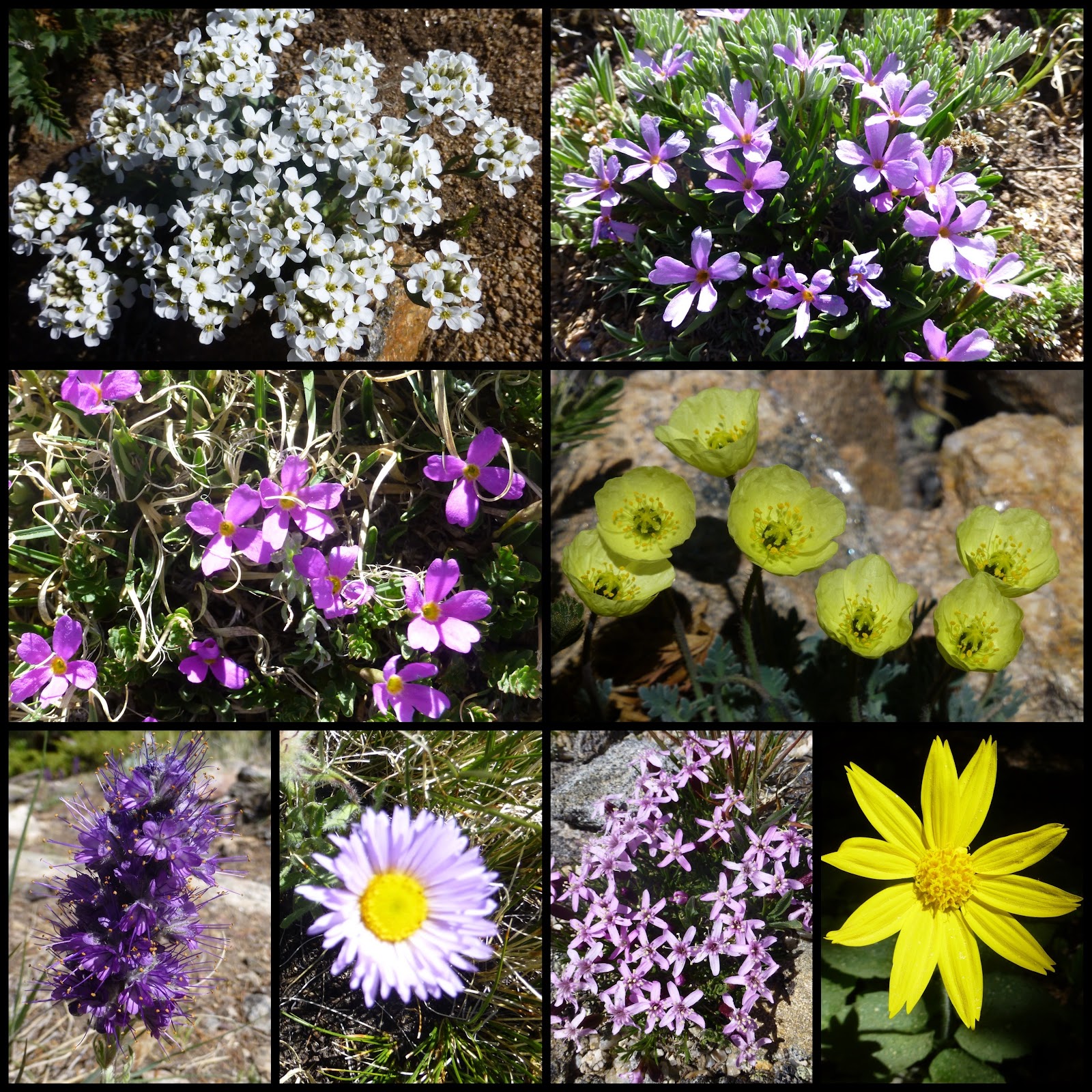 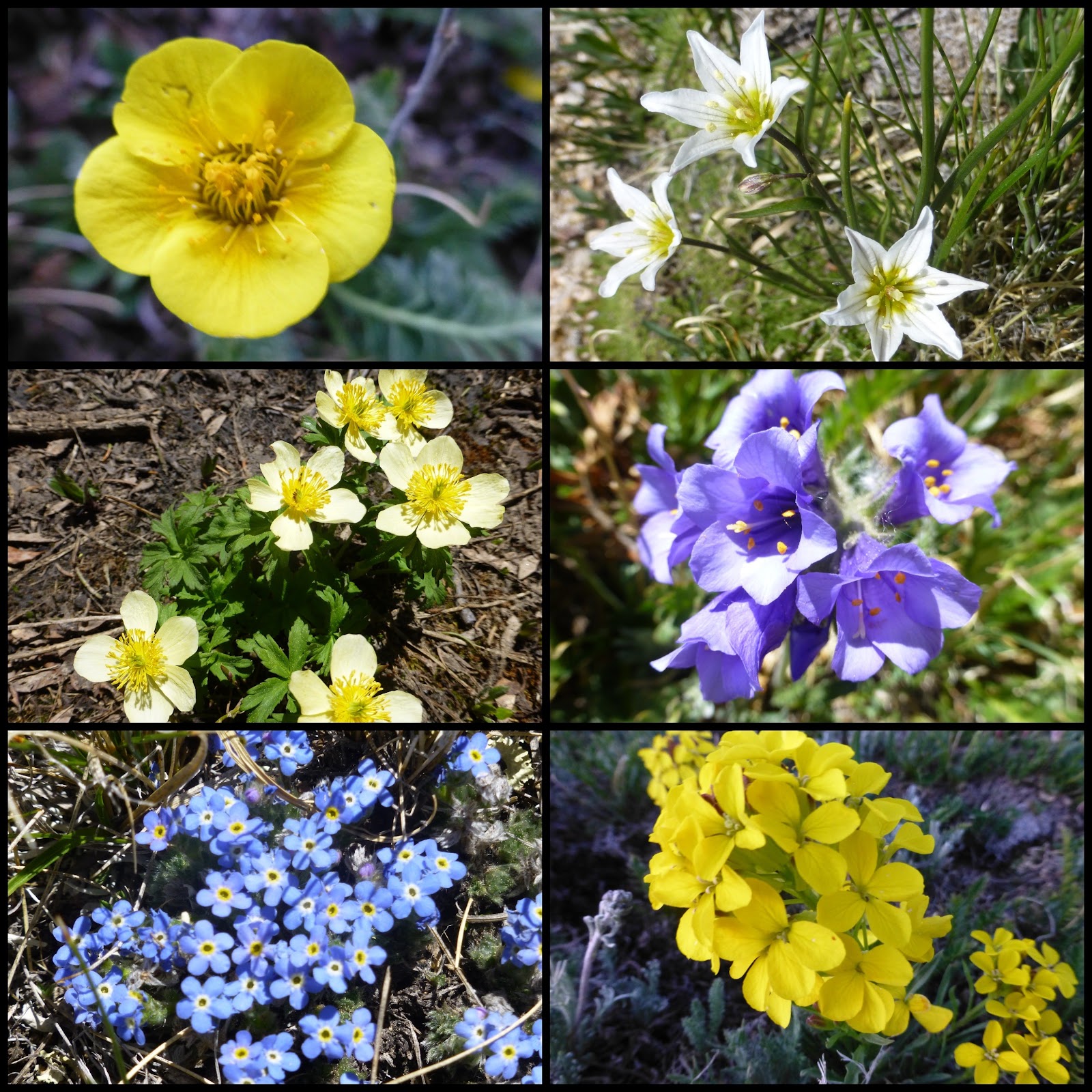 On the final big climb in the afternoon, I topped out at 13,308ft at the top of James Peak and got a StickPic photo. Notice all the rocks. 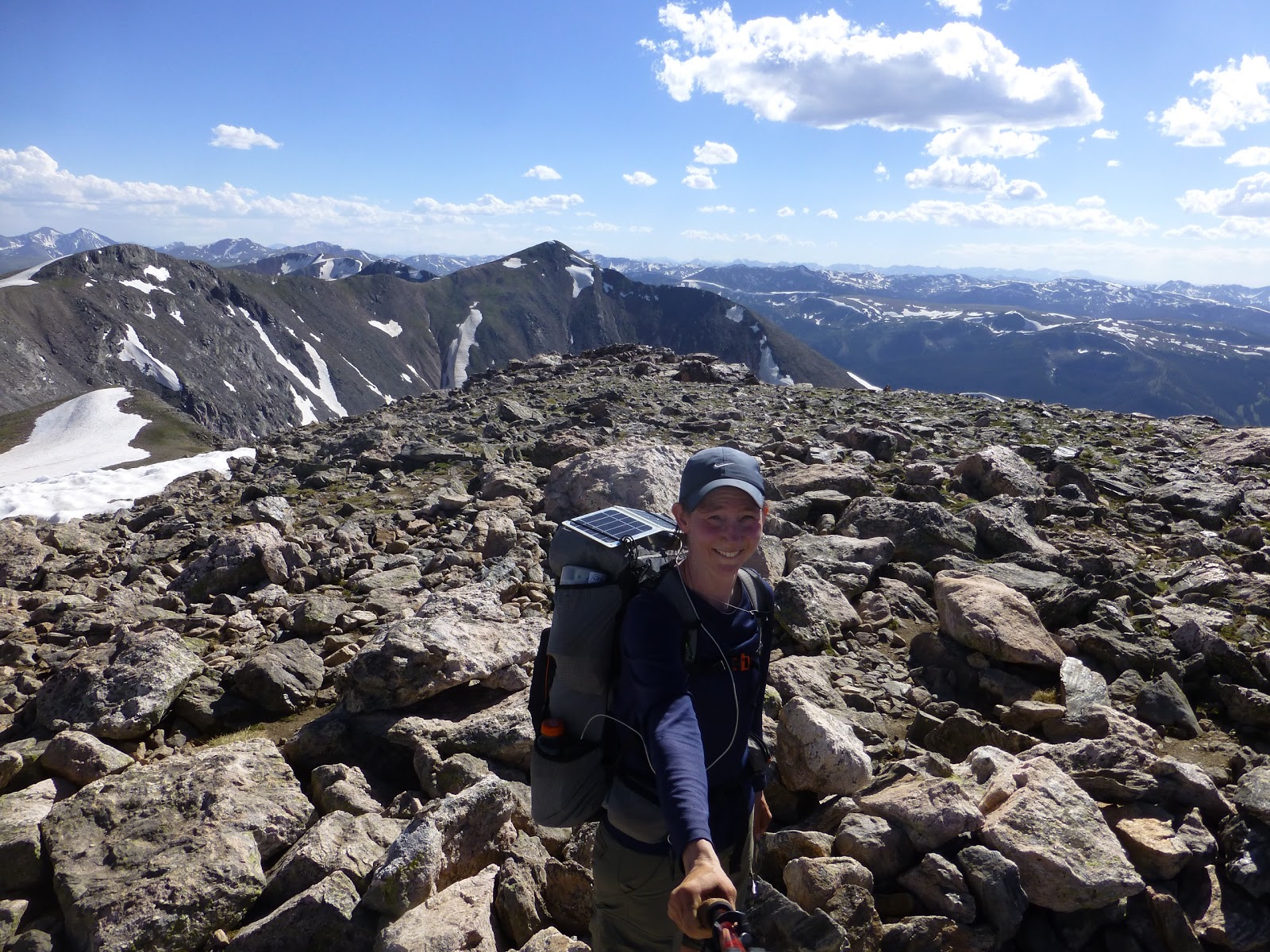 As I was climbing up, I saw Track & Field in the distance, so they must be near by. After that peak (which was of course rocky) there was cross country for a couple hours to end the day. I just walked in uneven grass on a slope with rocks and went from cairn to cairn. This section goes on like this for miles and is tiring, but has great views! It basically follows this ridge line. 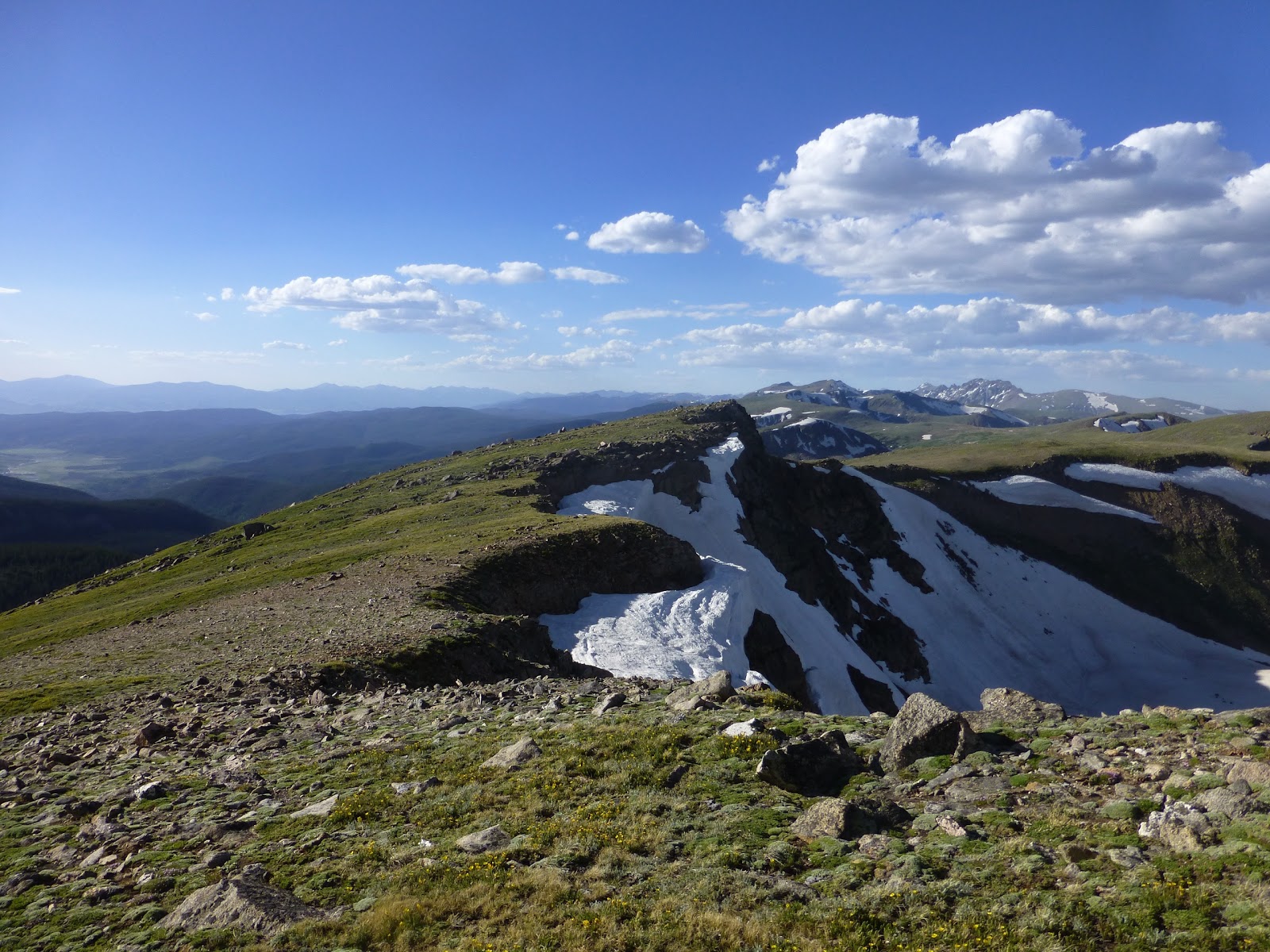 I hiked til 7:15pm and found a flat spot that was sufficient. Downhill from me quite a bit, I can see a car and some people camped, so I guess I’m not that remote. It looks pretty cool up here and there is no wind at all thankfully. Plus, I’m surrounded by little wildflowers and that’s cool.

I looked ahead at the next two days of hiking and it looks great as far as elevation. The trail actually goes down gradually most of tomorrow and I’ll be camping below 9,000ft! I don’t think the trail has dropped that low in all of Colorado! I’m looking forward to it and expect it to be hot down there, but hopefully less rocky…