Day 70: Taking In The Views

I got going on my own at 6:30am this morning. Estero is speedy and likes to sleep in, so we figured he’d catch up to me by lunch. First thing this morning was a 1,000ft climb to get up on the ridge I had pictured yesterday above the lake. I felt okay when I woke up and ate and drank well since it’s been warmer out and I wanted to make sure I was hydrated for the climb. Once I got on top of the ridge, I was coughing more and I was already a bit nauseas from my period, so the inevitable happened. My gag reflex was activated and I threw up all that water and breakfast I was so proud to have gotten down this morning. I have it about a half hour for my stomach to relax and then was okay eating the rest of the day. Frustrating that my gag reflex has been so sensitive in the morning. As for the hiking, this ridge was an alternate that was slightly longer and more tiring, but it was cool. Pretty much four miles of a ridge walk that had many steep ups and downs. Here are some pictures looking ahead and behind as I walked along the ridge. You’ll notice there isn’t a trail and you just follow the ridge. 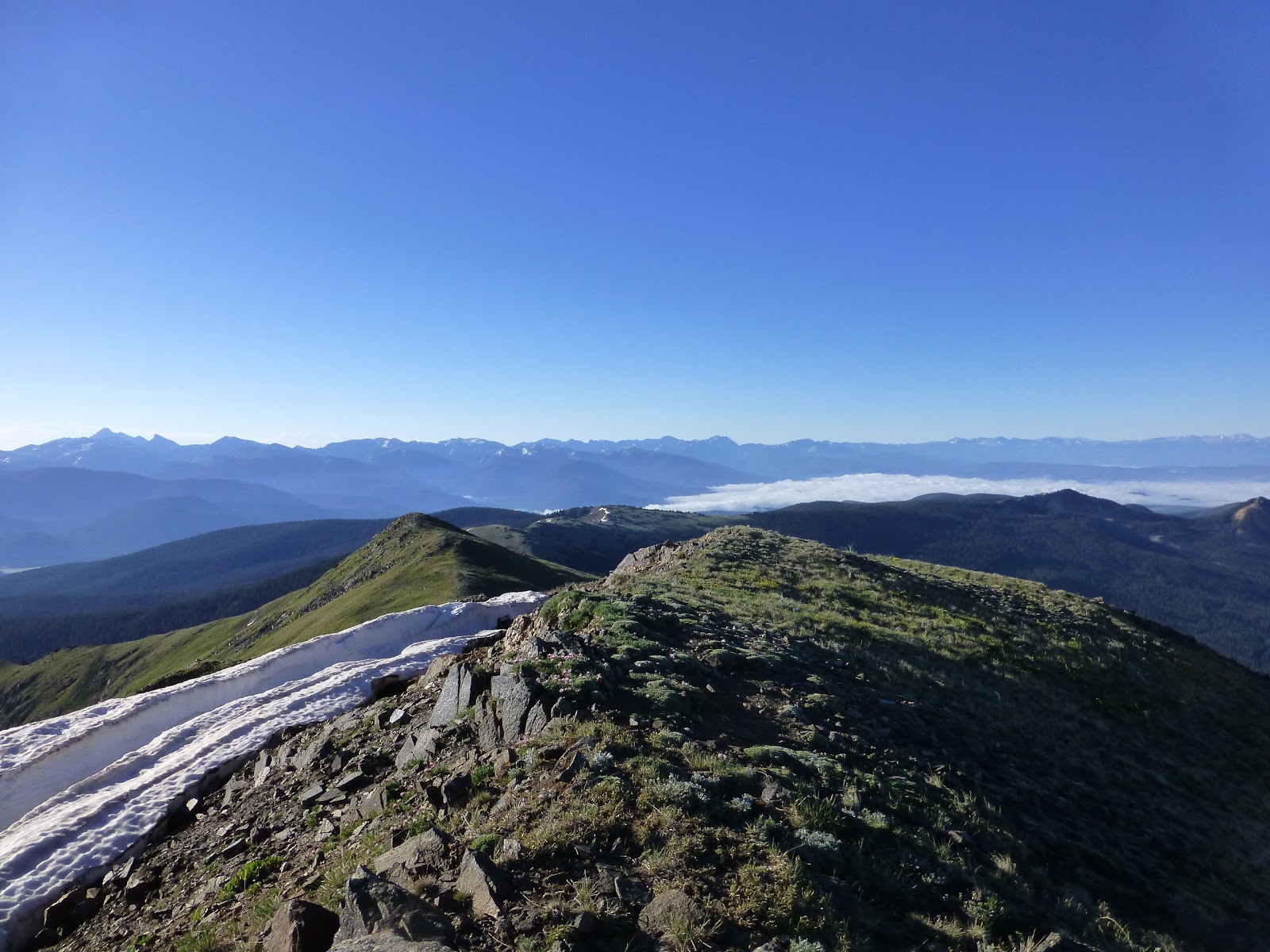 I walked on that! 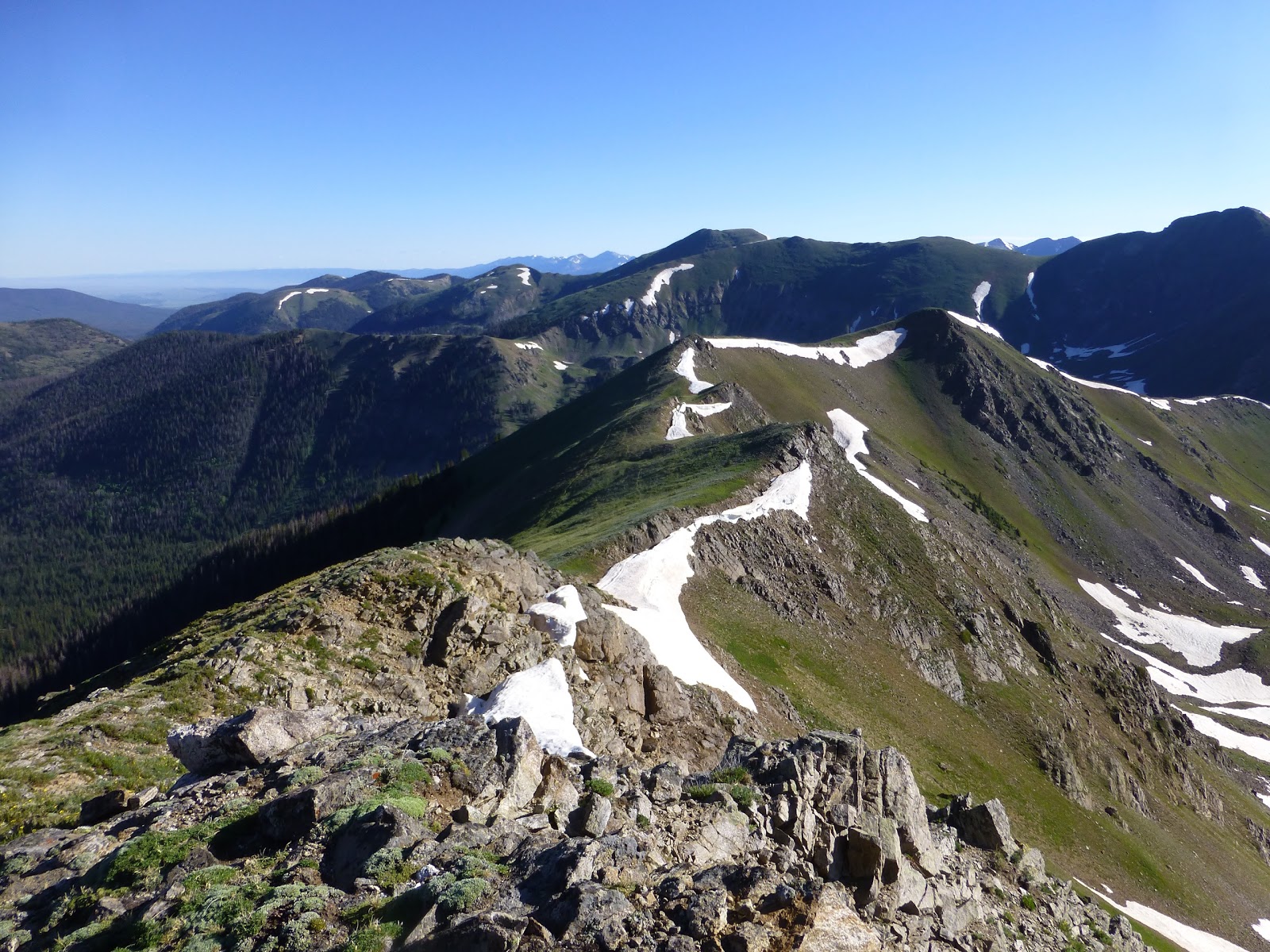 After the ridge walk was an extended period of time in the woods with a lot of dead trees from the bark beetle infestation. It is getting warmer now that we are getting to lower elevations and it was probably in the 80s while we were down in the woods. There were some meadows here and there, but mostly uneventful. 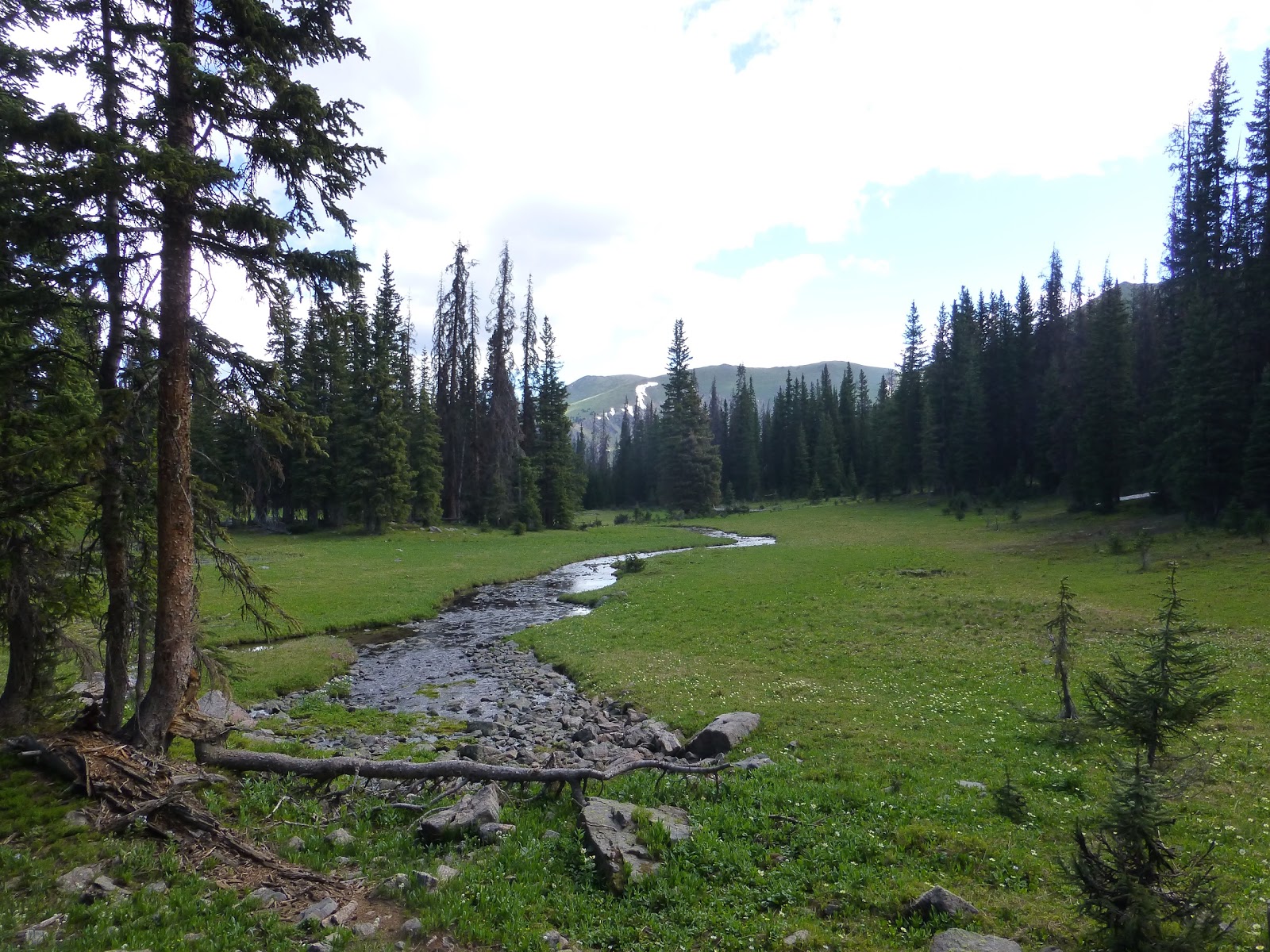 Just before lunch, Estero caught up to me so we were able to eat together. Then we looked ahead on the maps and decided to camp together, so we stuck together the rest of the day. The second half of the day was mostly up high on more ridge walking from cairn to cairn. I’ve been trying to take in the views more because I know the vast mountainous views are almost over. This is the last full leg in Colorado and next leg we enter Wyoming, which will bring it’s own unique terrain and views. The hiking this afternoon was just great and our timing worked out well too. Some afternoon clouds and thunder rolled in while we were headed up to our over 12,000ft highpoint. The rain fell lightly while we were still in the forest and by the time we got up over tree line, the clouds had cleared with blue skies. It was great! The terrain was less steep than we’ve had, so we were able to really take it in and savor being up there. The wildflowers were all over the field as we walked from cairn to cairn. Sometimes there was trail. 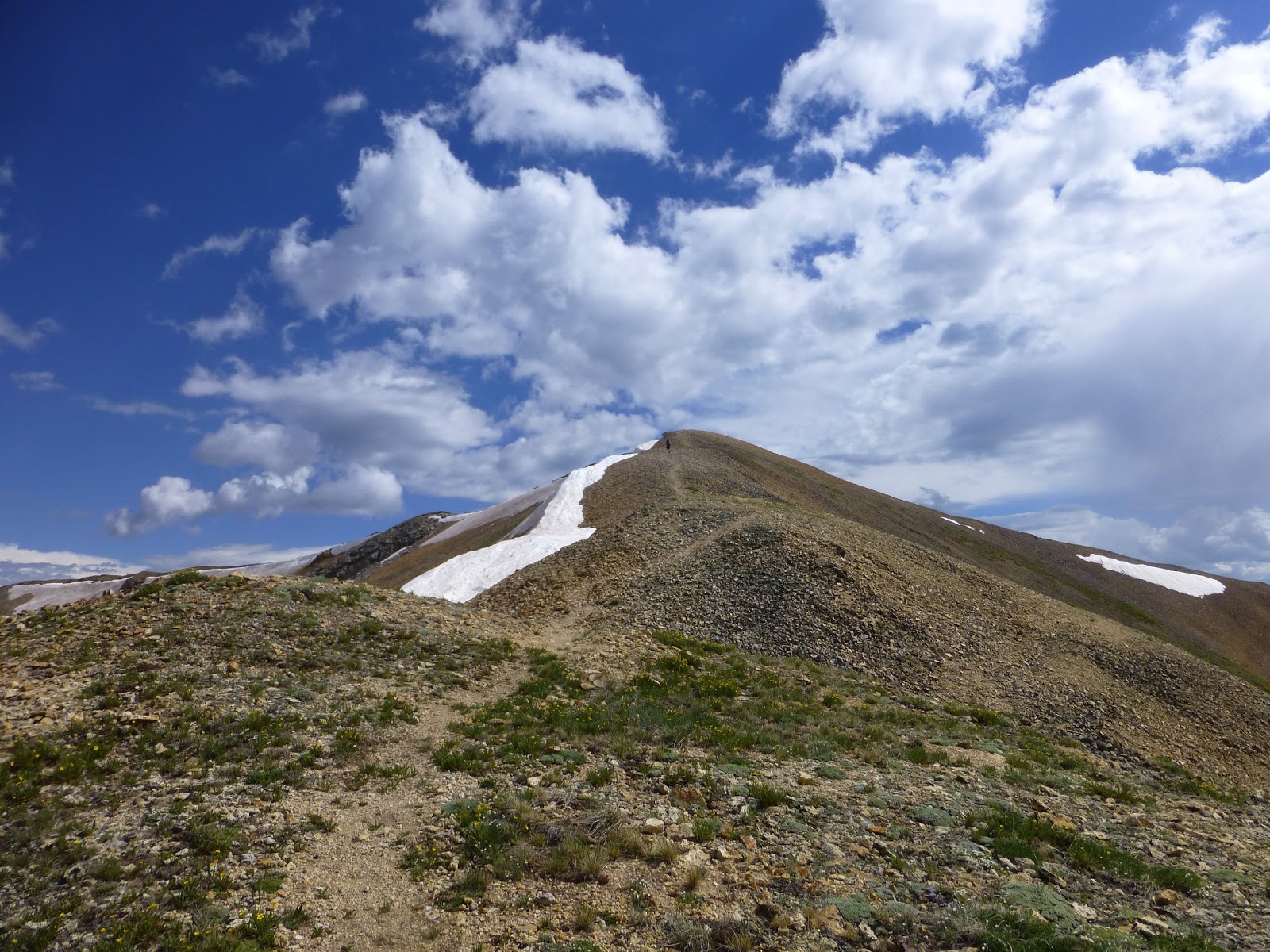 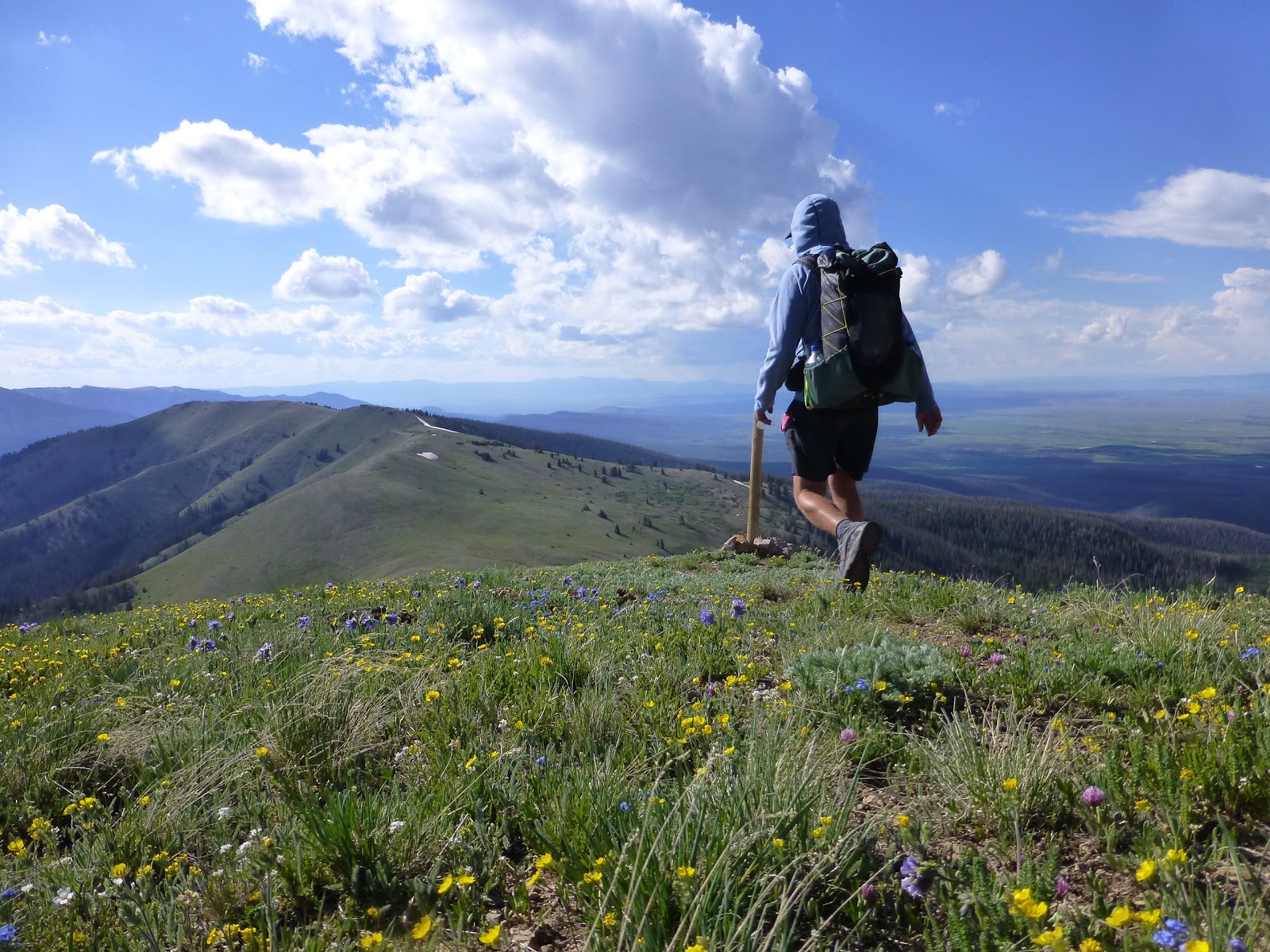 We stopped at the top of a mountain with a small, old fire lookout to take a break and I loaded my blog. While up there, Estero noticed we were closer to town than we thought. For some reason, our two map sources give different mileage totals, so it looks like this leg will only be three nights instead of four. We realized we now have extra food and Estero started eating lots more since he could. We made good progress today and it feels good to be able to get higher mileage now that the terrain and elevation aren’t so bad. The trail dropped down into the woods just as we were ready to camp: so we are in a very comfy and protected spot. My camera decided to go back to not working again. It will take one picture at a time, but it won’t zoom or respond to other buttons. Argh! That’s pretty much it for today. It was a good day!