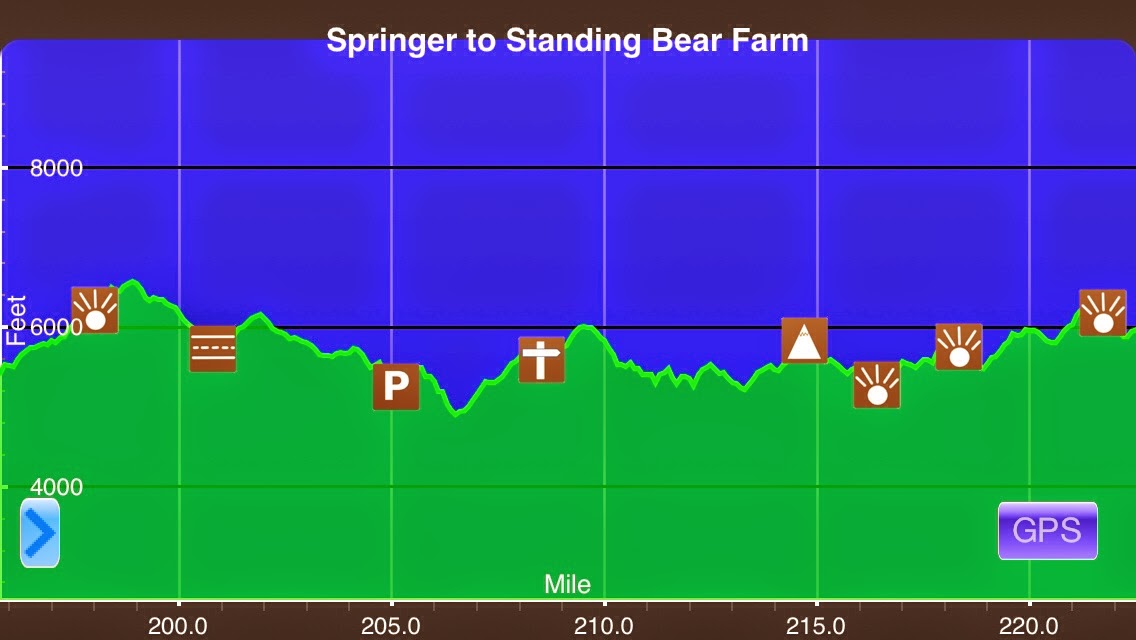 I woke up excited to go to Clingmans Dome Tower. It’s a touristy site in the Smokies, and at 6,655ft, it is also the highest point on the AT. I was hiking by 6:45am and it was a mild morning. It didn’t take long on the climb up to be fine in a tshirt. It was about 3mi into the morning and I was happy to arrive early enough that just a couple other tourists were there. We took pictures for each other. 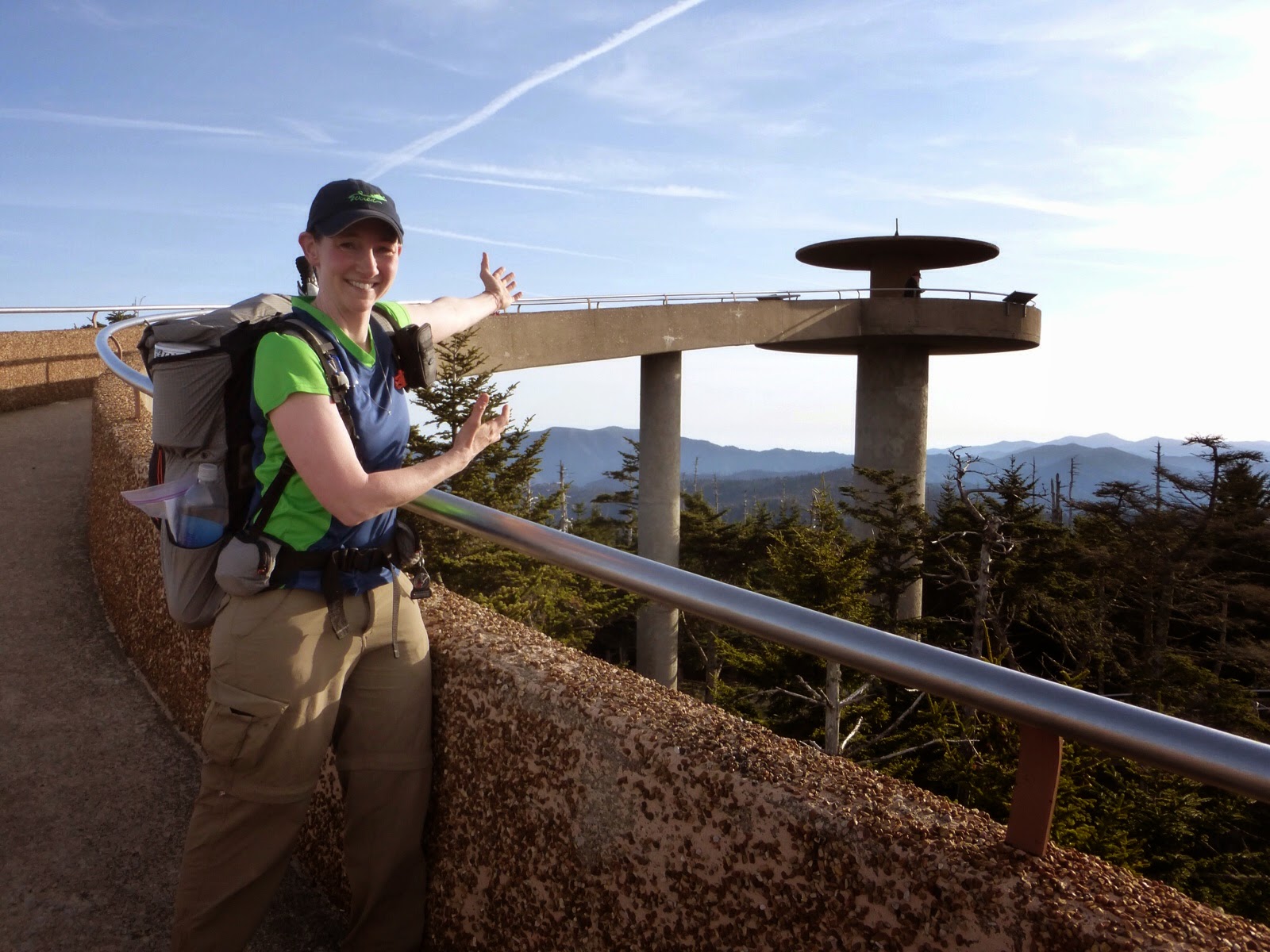 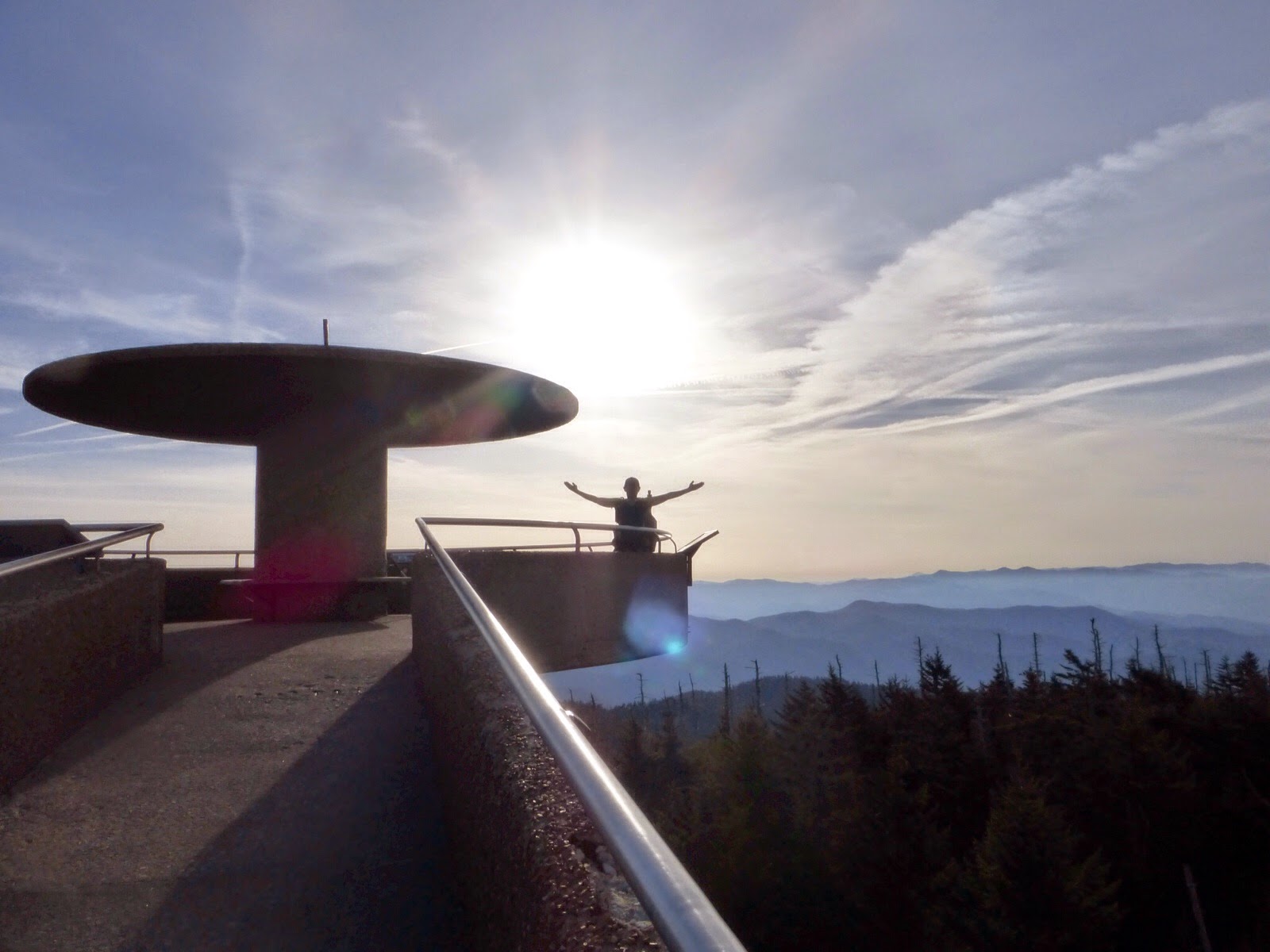 It was nice to be up there without tons of people and dodge the weekend crowd. On my way down, I saw another thru hiker I had met at the shelter last night named Ken. Within an hour, Ken caught up to me as I was stopping to do things online when I got service. He’s a fast hiker and we ended up hiking the rest of the morning together until we hit the next big tourist spot, Newfound Gap. I still don’t quite get why it’s such a touristy spot, but it had a Rockefeller Memorial because they gave the final funds needed to create the highly used roadway. 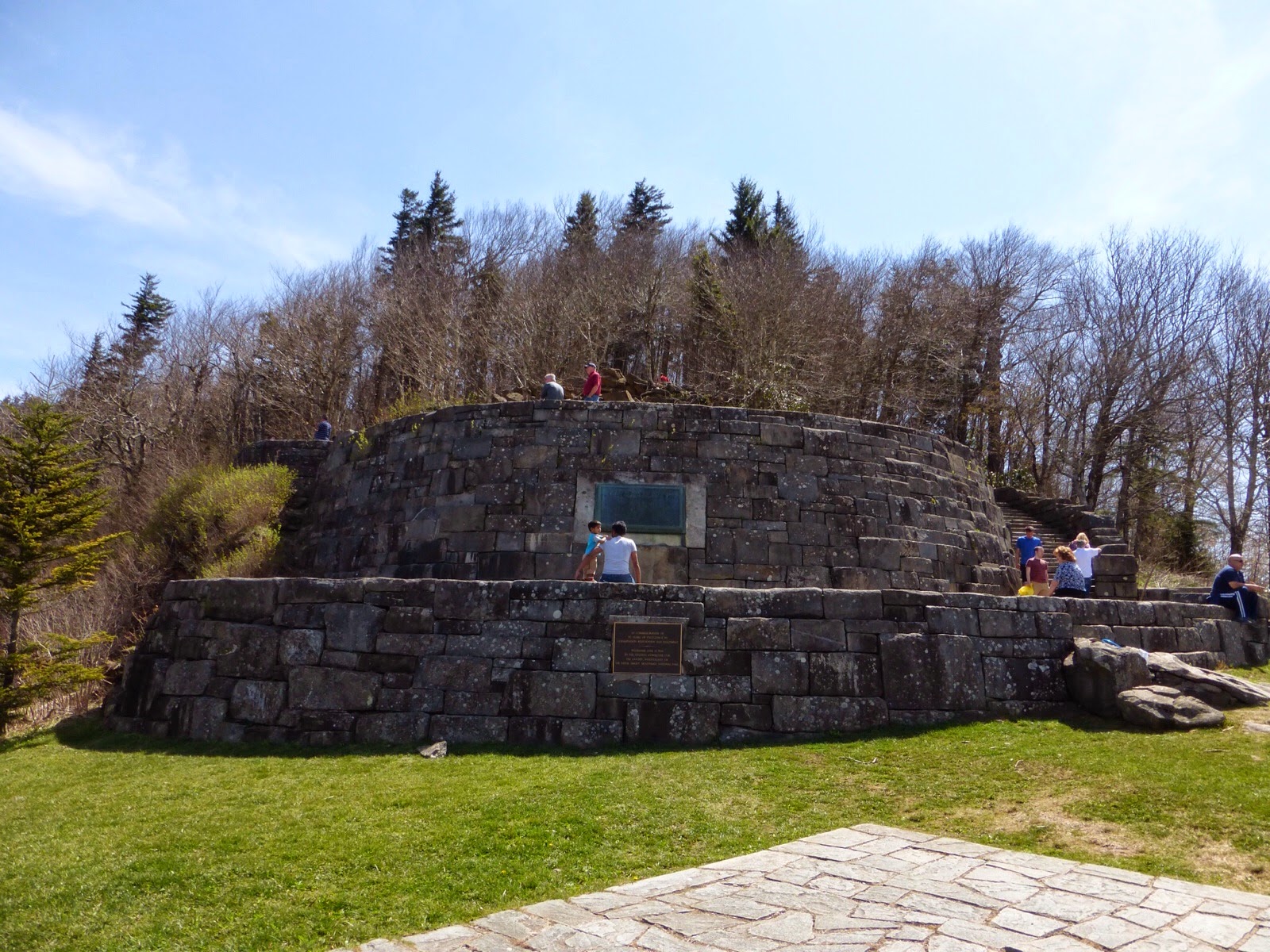 Many hikers were there as the trail goes right through the large parking lot with possibly 100 cars. In the center is the first official sign to say that we’ve entered Tennessee, the third state along the trail. The Smokies run the border of North Carolina and Tennessee. 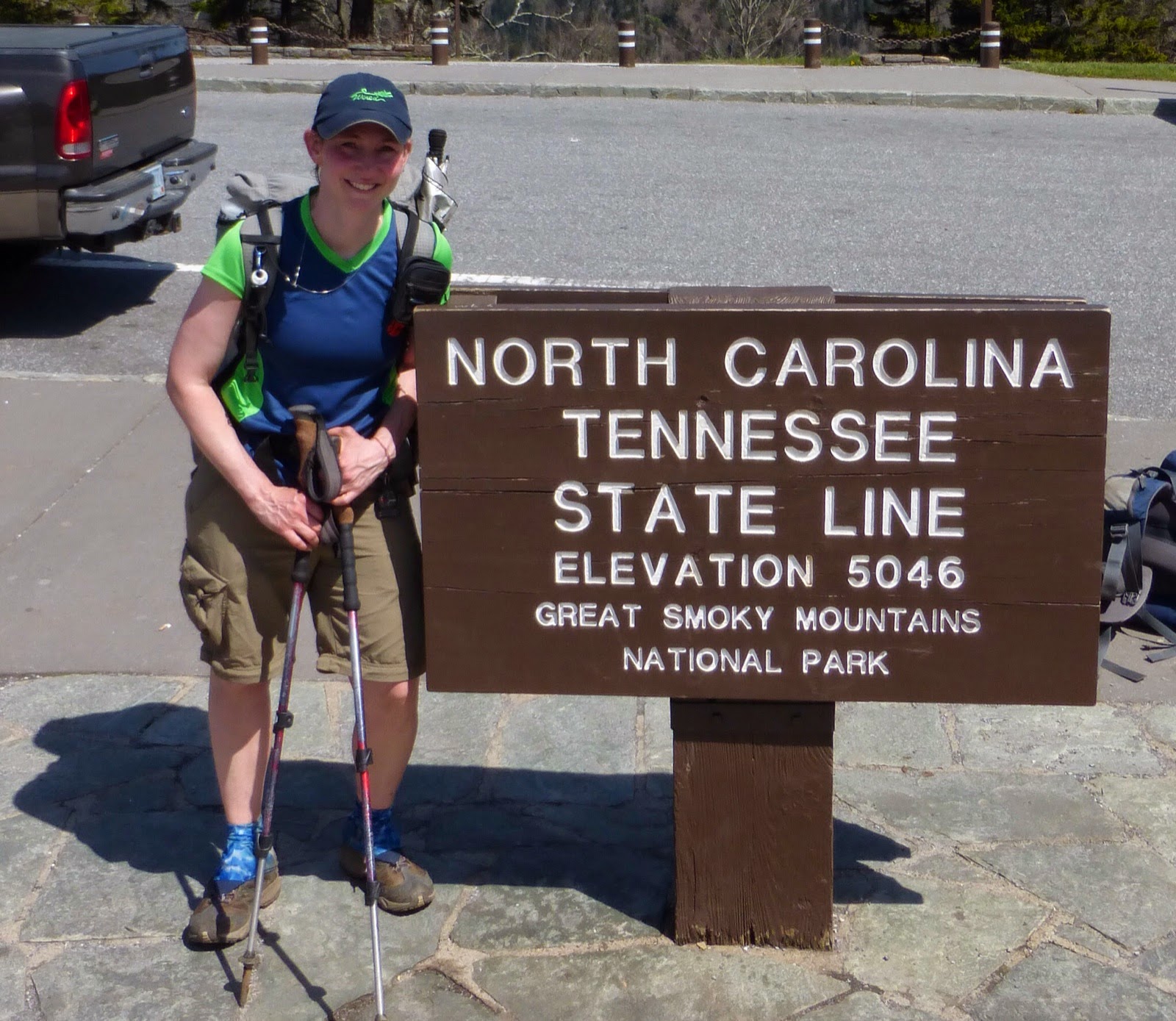 I had lunch there and so did the other hikers, but I found a spot to myself and enjoyed people watching in silence. It was a bit overwhelming. While I was there, I was able to look up the weather forecast. For days, hikers have known that thunderstorms are on the way and that they could be strong. I was hoping it might pass over as light rain like they did last week, but that doesn’t seem to be happening. It is Sunday and the forecast said the rain and scattered thunderstorms would start tomorrow afternoon and that there is a strong chance of thunderstorms all day Tuesday with the possibility of some being severe. It’s the word “severe” I don’t like. My original plan had me hiking until Wednesday afternoon where I’d get off at Hot Springs and take my first zero(no hiking day) in Newport where someone has kindly offered to host me. With this forecast, I’ve decided to strategically move the zero up a day and a half so I’ll get picked up tomorrow night and hopefully spend my zero on a day when there is severe weather. I’m fortunate that my hosts, Diana and Joey, are flexible and live close enough to pick me up at a different location. There is still a slight chance of thunderstorms on Wednesday when I plan to get on trail, but then it’s clear, so I think I’m doing the right thing. My body wants to keep hiking, but my gut and mind are telling me not to be stupid and take shelter if it’s available.

Knowing that the storms could start tomorrow, I decided to hike to the furthest shelter today and that put me over 26mi for the day. I spent the afternoon hiking with Ken who kept a good pace. He’s attempting the trail for the third year in a row having completed the first 600mi in 2012 and tried to complete the rest last summer before an injury stopped him, so he’s back and decided to start at the beginning with a brother that’s now further back. There wasn’t much conversation as Ken seems to be going through the motions to get through the miles he’s done before, but I think it was motivating for both of us in keeping a good pace. He stopped at a shelter before the one I did and I may see him again after my zero. Here is a photo of him where we split for the day. 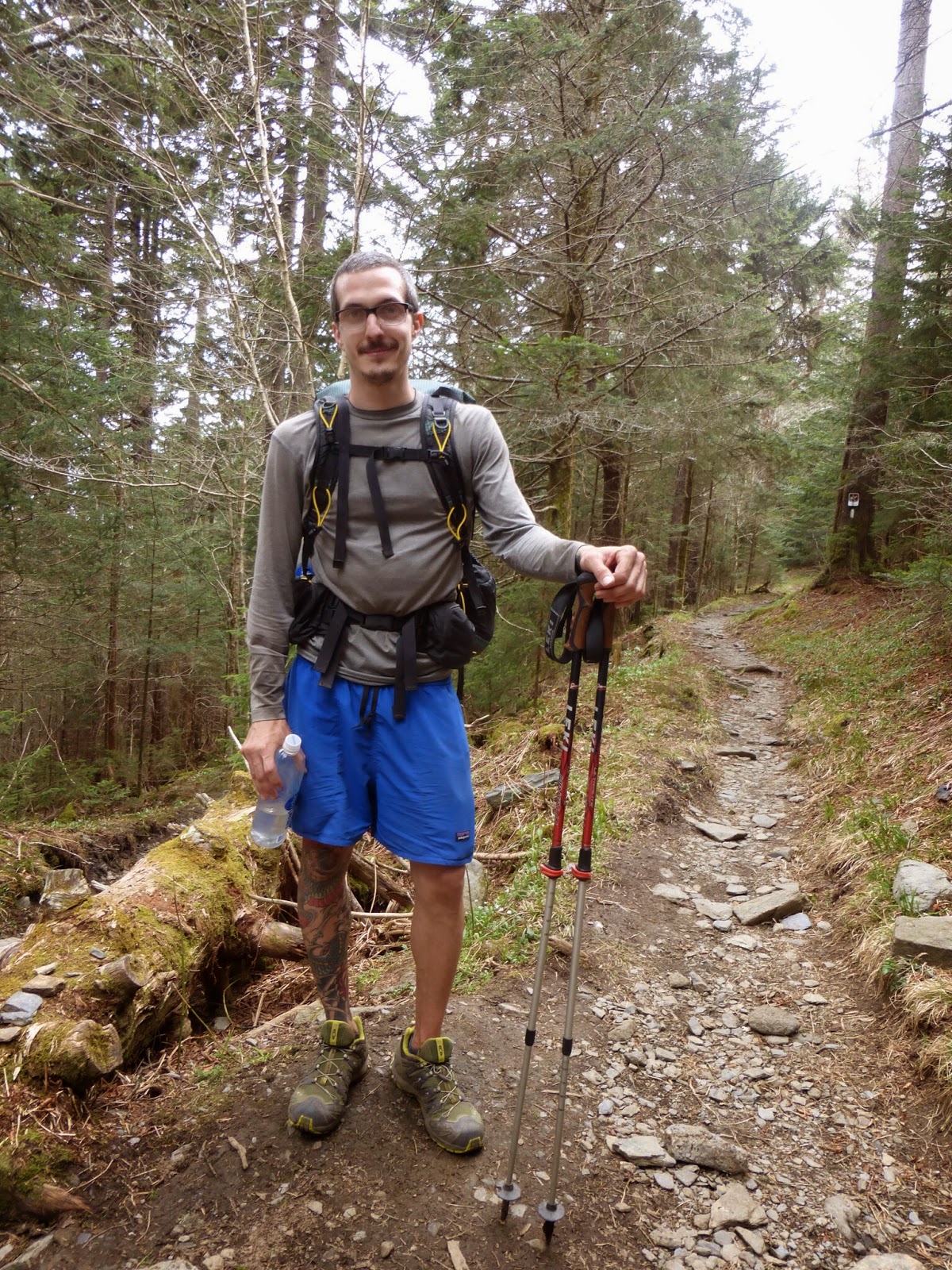 There were lots of views today and that was nice. It was also my kind of forested hiking. It was old growth forest with pine needles, rocks, roots, and moss. It smelled wonderful and shaded me much of the day. I was really energized by it and enjoyed the hiking today. I felt like I could’ve hiked forever. I listened to more of the audiobook of Divergent and really enjoyed the last couple hours on my own. 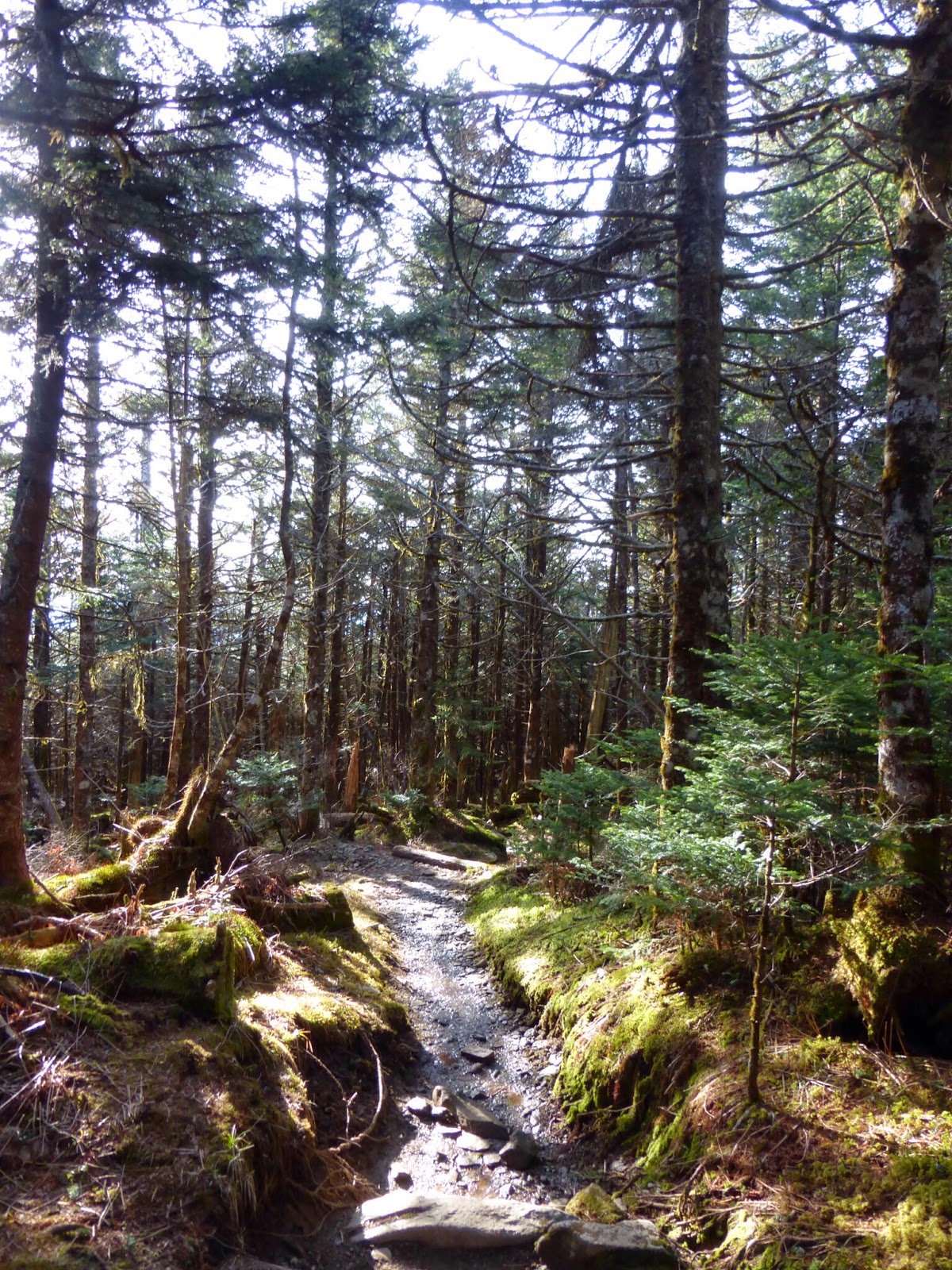 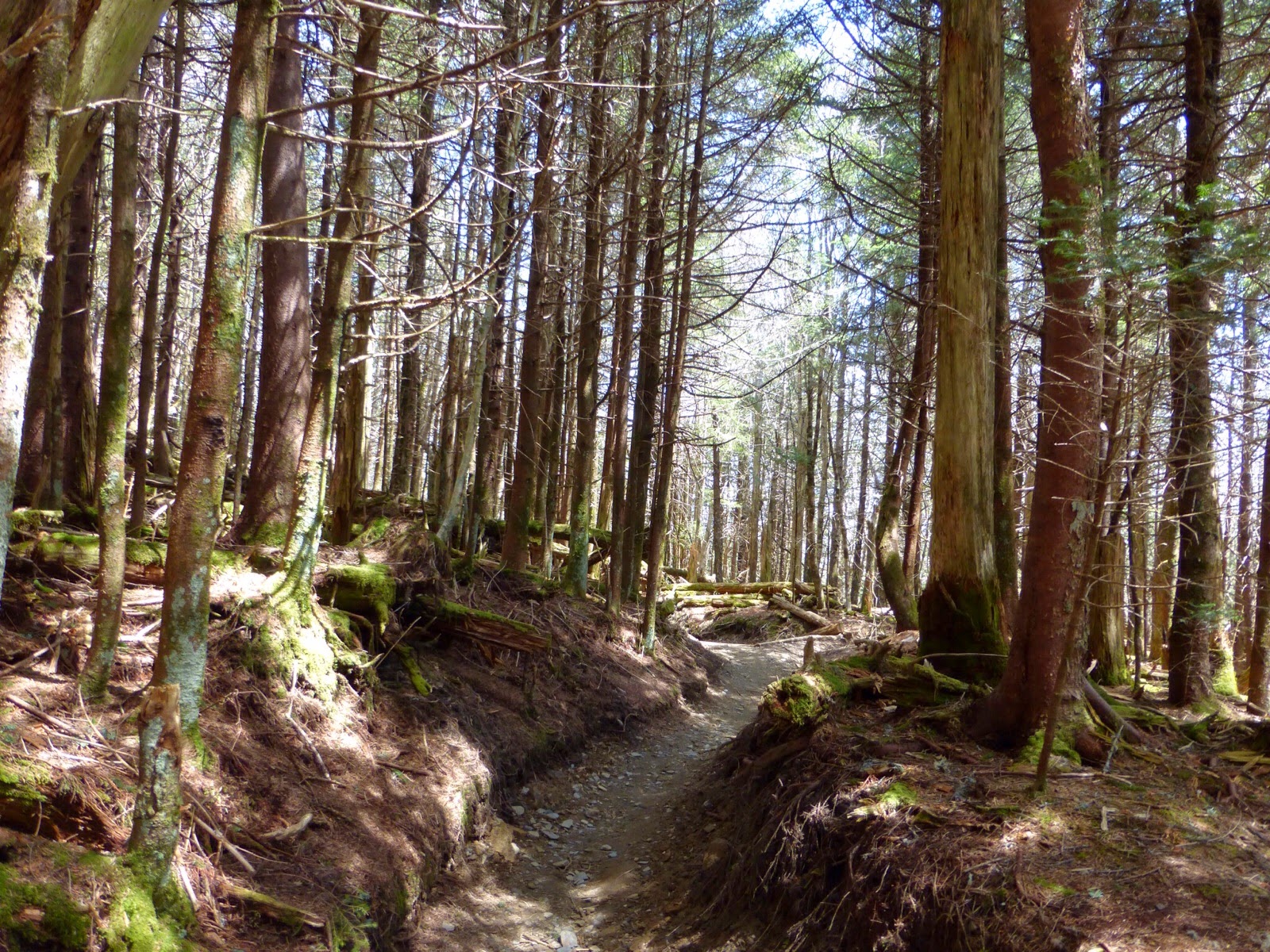 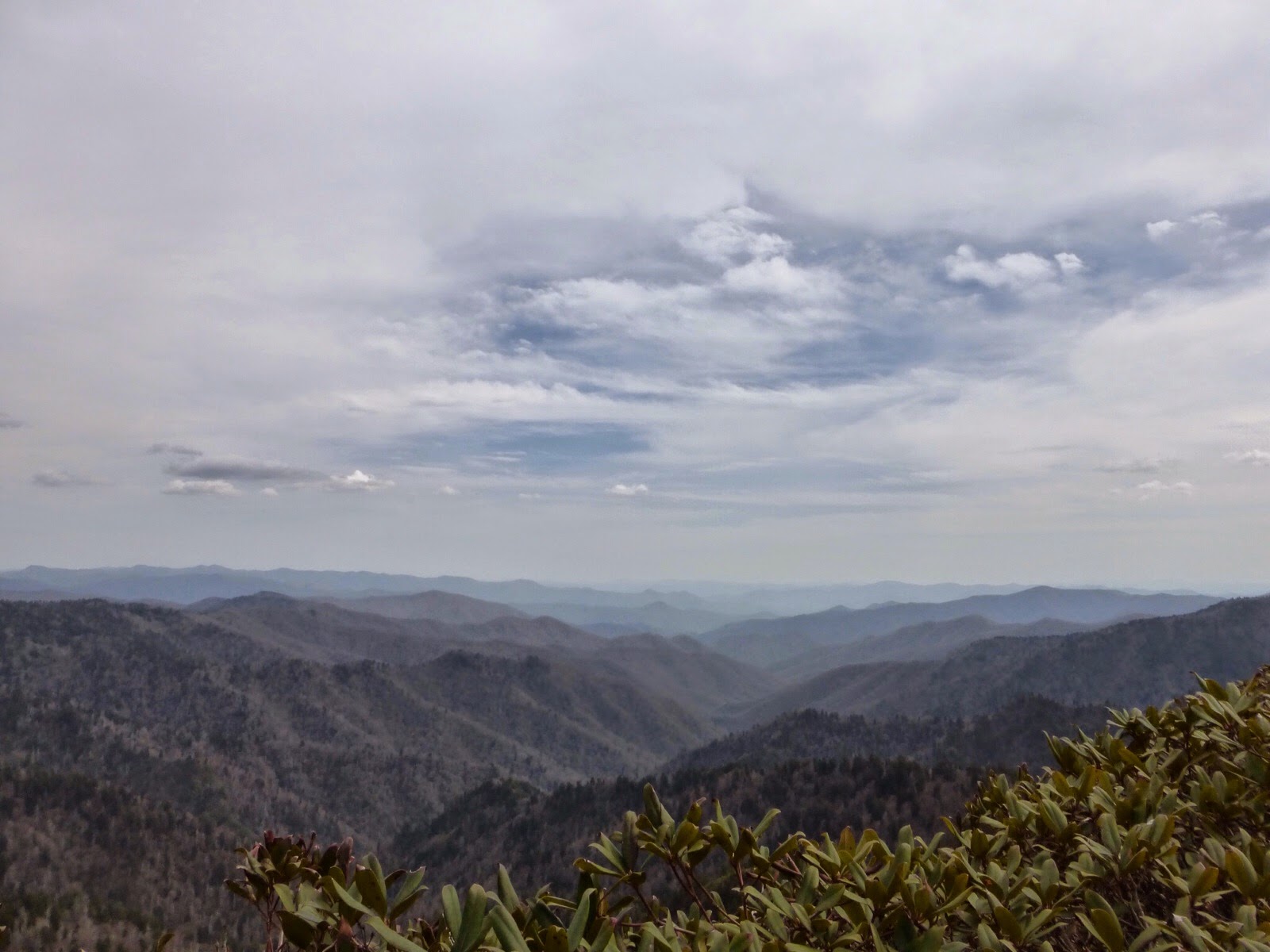 I briefly overlapped with a woman named Red Robin, a 49yr old woman with short red hair, who is raising money for ALS through her hike. Her story is compelling as she was inspired to follow her dreams of an AT hike when she watched as her coworker died from ALS last year. She said it was heartbreaking as his body slowly deteriorated while his mind was still sharp. It is a reminder of how fortunate we are to be able to hike. If you’re interested in contributing, her site is crowdrise.com/alstakesahike. I will probably see her again after my zero day and will make an effort to get a picture. She and I did a short side trip to a cool spot called Charlie’s Bunion. It may be my favorite spot on the AT so far. 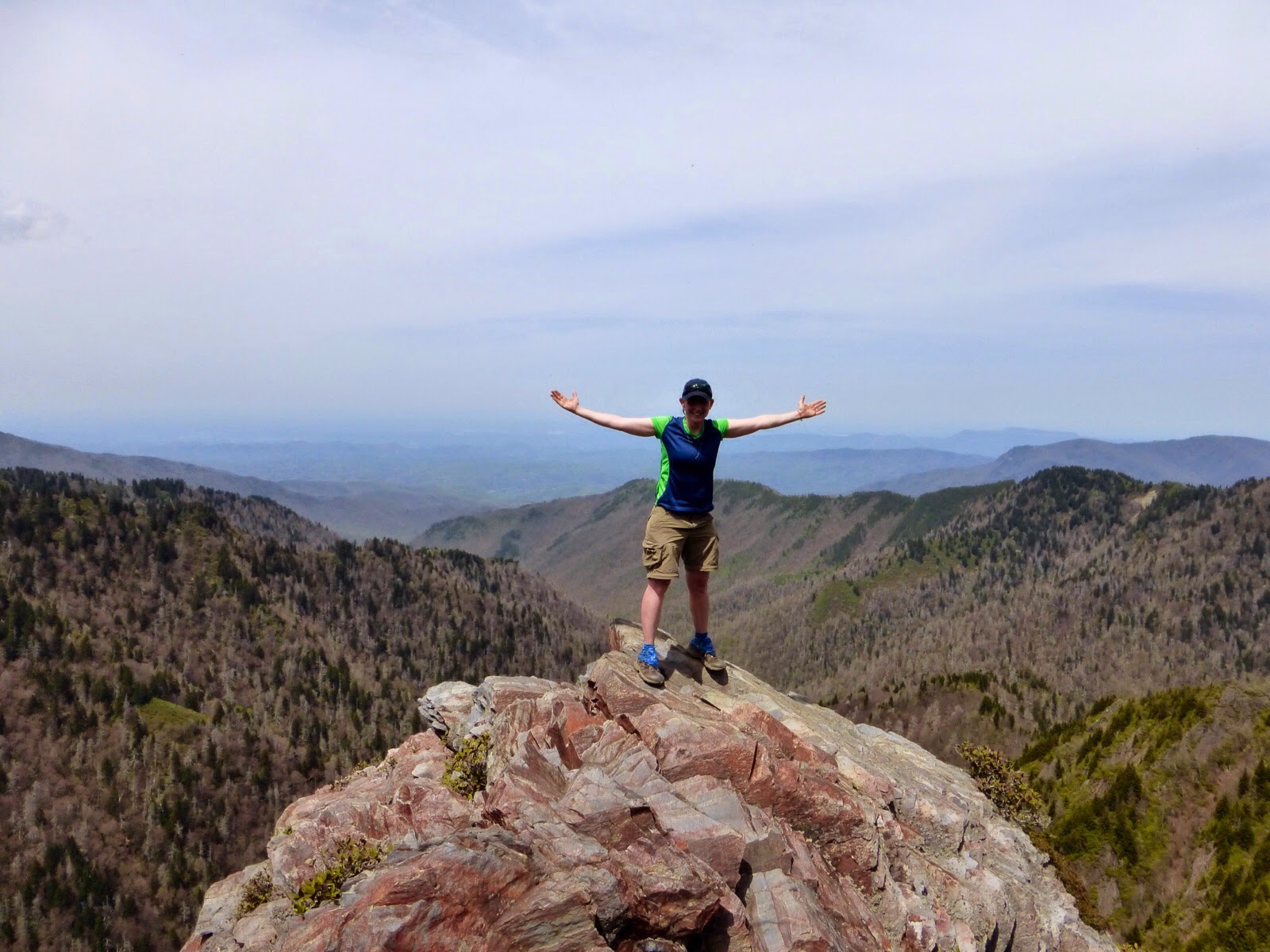 I arrived at the shelter at 6:30pm to find a very nice group of about 6 thru hikers I haven’t met before. I still chose to set up my tent instead of sleeping in the shelter, but I seriously considered the shelter. Some weekenders came to stay and said they heard the thunderstorms would start tonight whereas others heard 40% chance of rain. I decided to risk it and go with the tent. If it gets bad, I have the option of going in the shelter in the middle of the night and they have kindly made a space for me. So I’m hoping for a dry night! I’ll be okay with showers, just hoping nothing strong moves in. I’m very happy in the fresh air in my tent at the moment. We’ll see what happens. Either way, I’m relieved to know I’ll be in a safe and dry home tomorrow night.