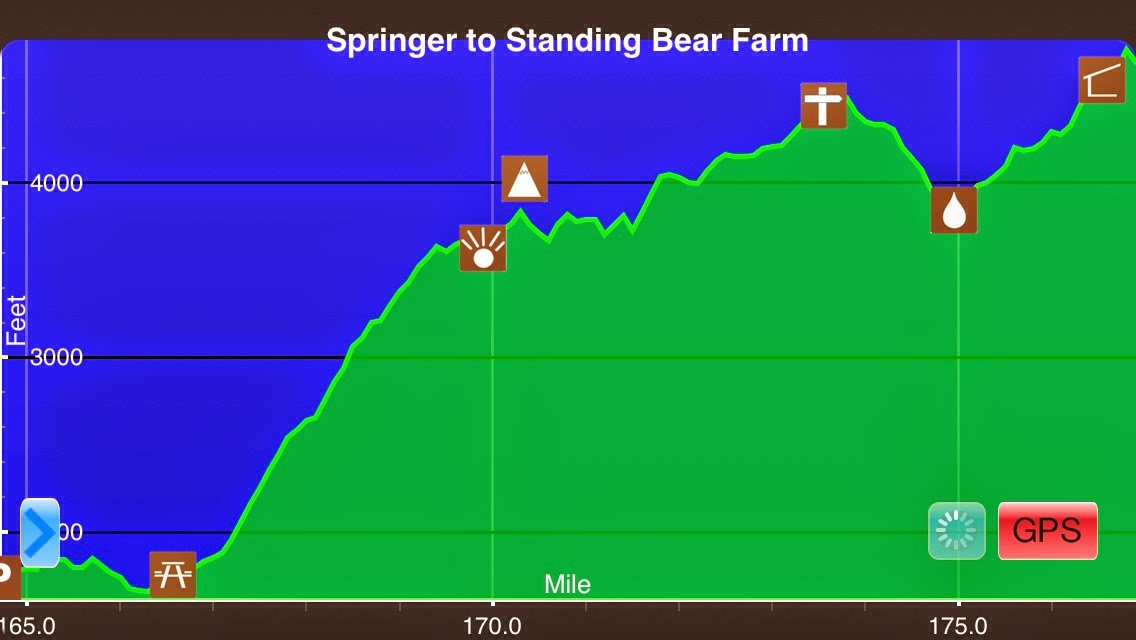 I’ve noticed that Guthook AT Hiker App allows me to show the elevation chart each day, so I think it will be fun to include it each day.

My internal clock just seems to be set to wake up at 6am. I had planned to sleep in at the lodge after hiking three big mile days, but even in a comfy dark hotel room, I was awake at 6am exactly. So weird. My neck was immediately strained again and that sucked for the day. Apparently, big fluffy hotel pillows are not happening anymore this trip! I was able to get to the lone computer in the lobby and do over an hour of correspondence, so that was great! As a side note, one of the emails I sent out was to a guy named Walnut who had commented on the blog that he was going to be doing a section hike leaving the same day as me from Fontana Dam and that we might overlap. Tumbles was up early too and was taking a zero. I know it’s hard to see, but here we are celebrating the fact that we both pushed a tough 25mi day yesterday to get to the lodge and we are nice and dry while it’s raining this morning! 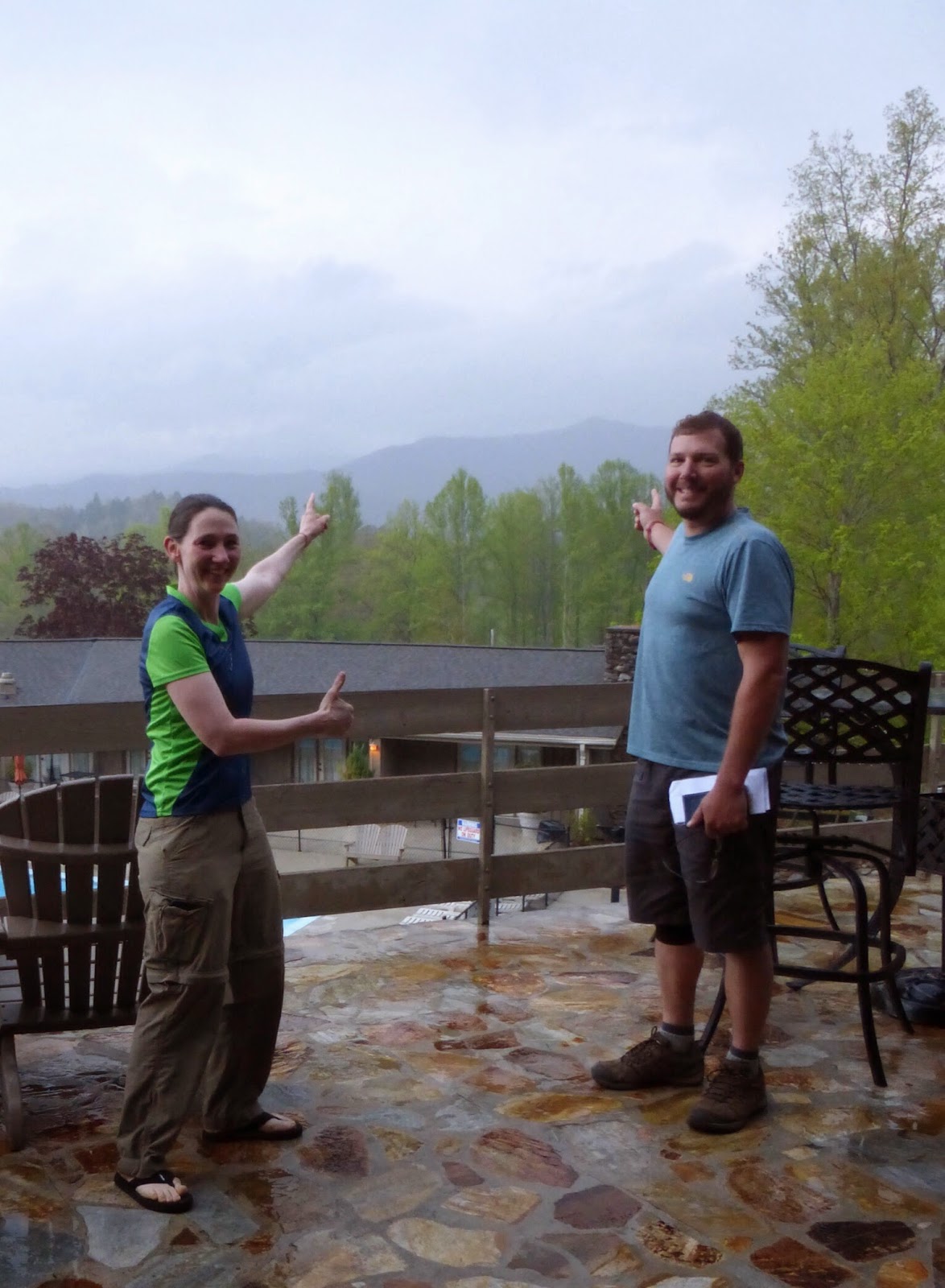 I really like the lodge and totally recommend it for hikers! There were lots of hikers there and they were very accommodating to us. Plus, it’s probably one of the nicest places I’ve stayed on a trail. I had breakfast with Tumbles and another hiker we saw eating alone named Ace. Then I did a convenient store run to complete my resupply and we did a shakedown of Tumbles’ pack. He’s new do thru hiking and carrying way too much. Including the boots he carried last leg to send home from here, we cut 10lbs from his pack weight! He’s going to drop even more after the smokies, update his cook system, and has his lighter 50L pack being sent. I can’t believe he’s been doing big miles with all that weight! Here he is with all the gear he sent home which included two nalgenes, metal cutlery, a can opener, a deluxe shower kit, a ton of clothes, a sleeping bag liner, and the biggest compass and mirror I’ve ever seen. He was so excited when he put the pack back on. 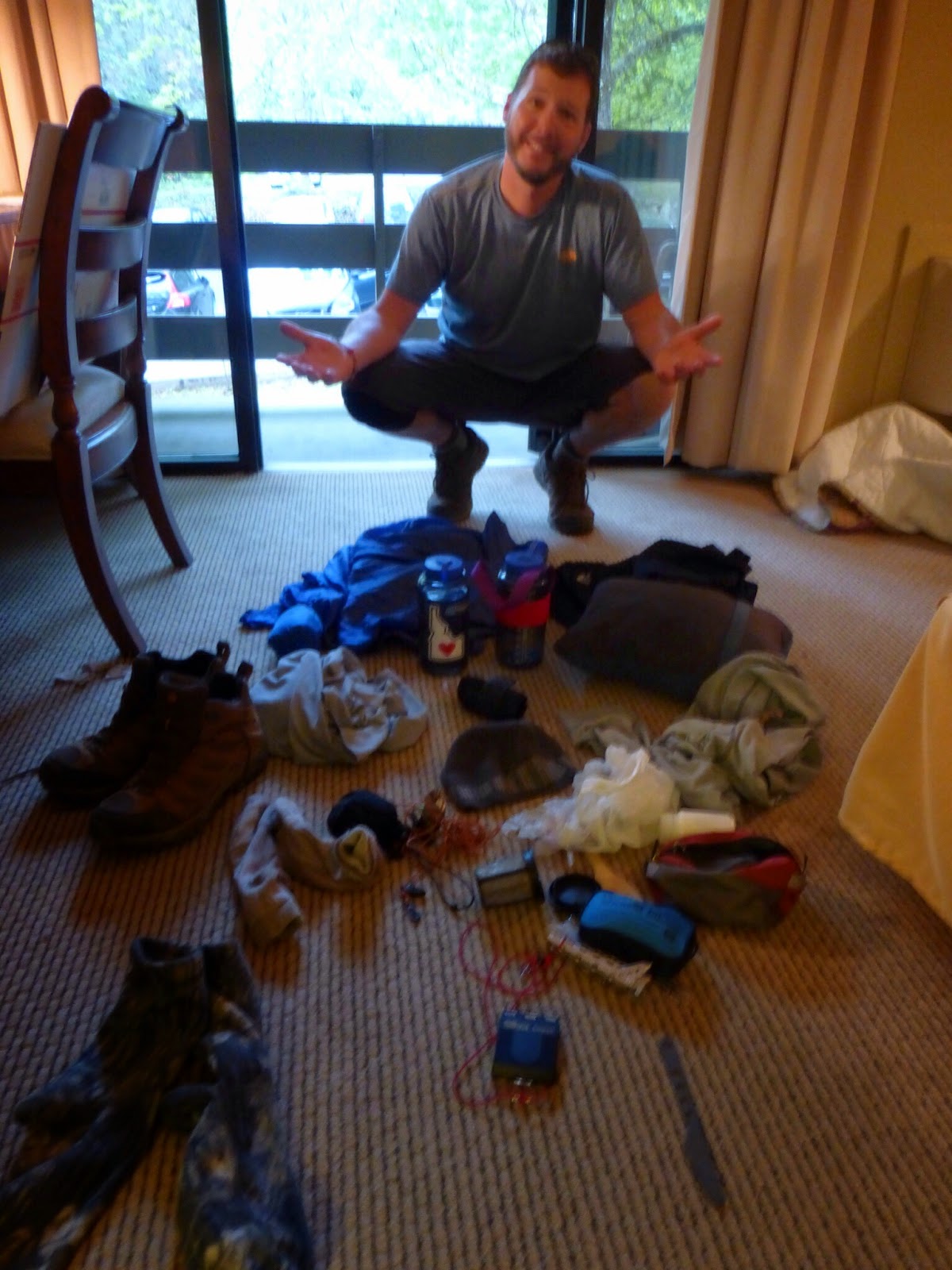 Time went by fast and by the time I got my chores done, it was time to check out and head back to trail. I was bummed I didn’t have time to watch any shows. A shuttle took me and some others to trail and I ended up hiking the day with Ace who is 67 and kicks ass hiking. At first I wasn’t even going fast enough for him. I really liked hiking with him. He is hiking a section hike now, but did the AT in 2003 and has section hiked the whole PCT. Here he is in all his awesomeness! 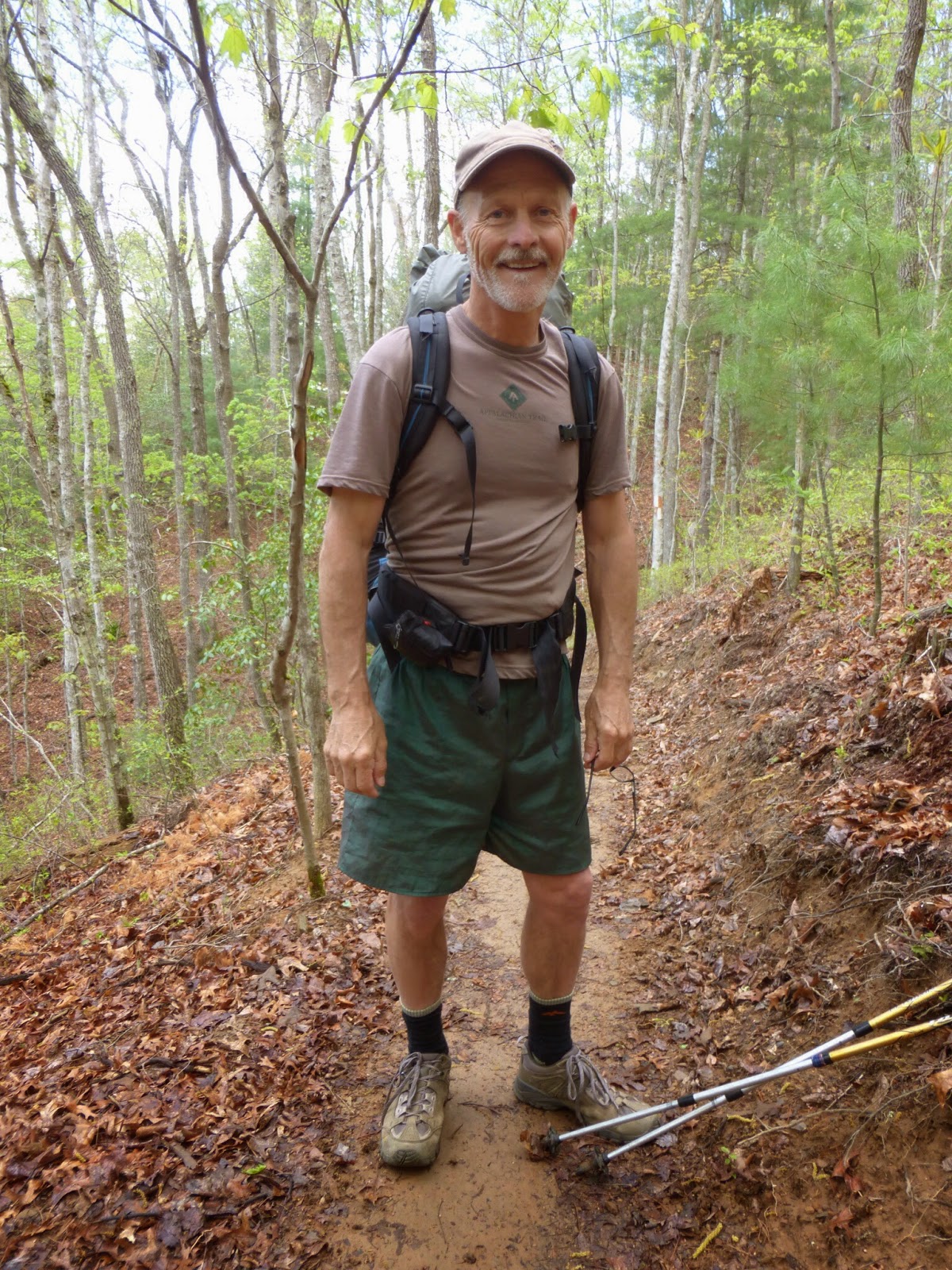 We walked right over the dam and it was cool! 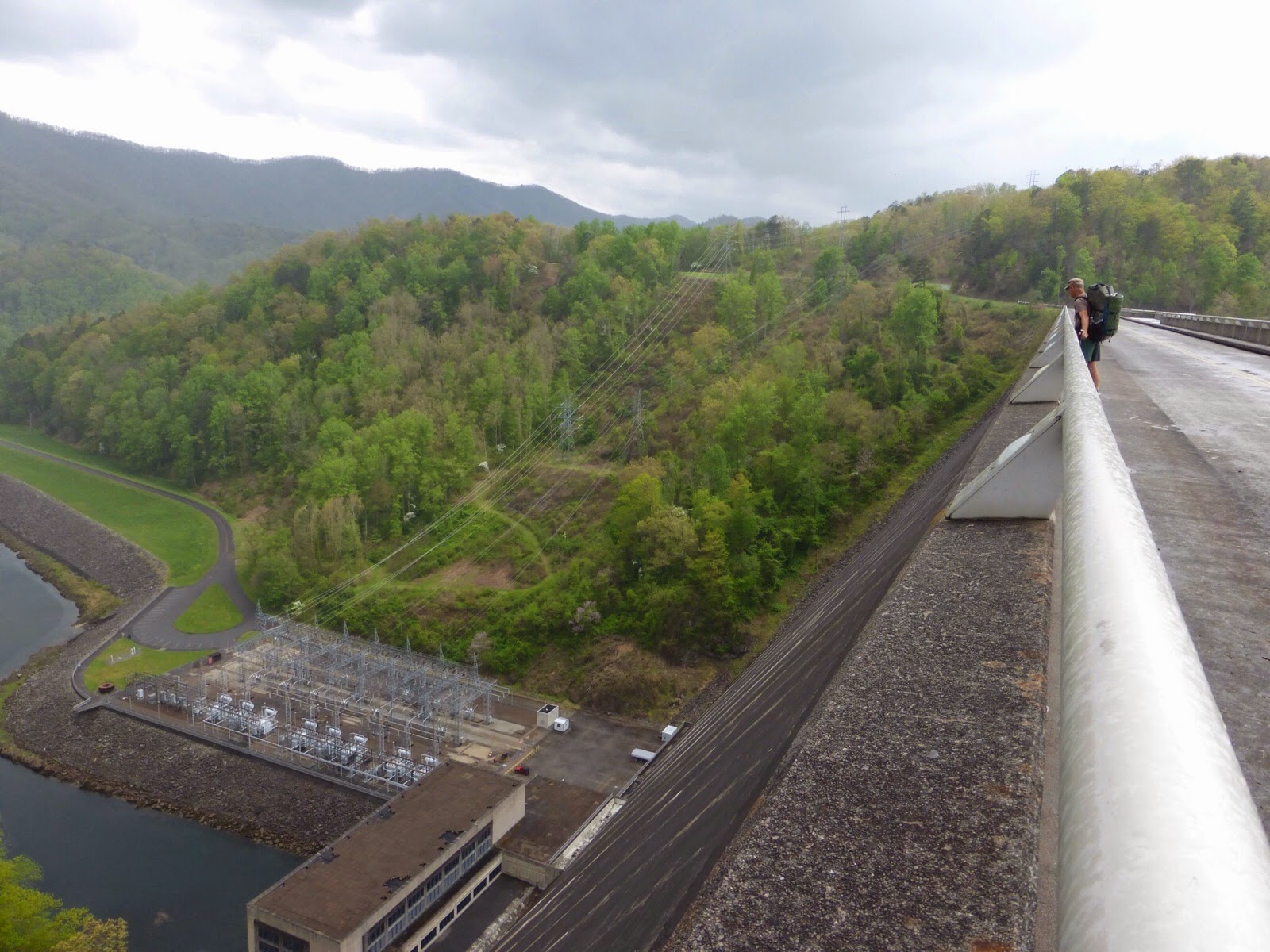 We were entering Great Smokey Mountains National Park and will be there for next 5 days or so. The difference in the Park is that there are rules about camping. There are shelters and rules about staying in them. To prevent overuse, it is required to stay in a shelter until the shelter fills up. Then there is a hierarchy of who gets to tent or shelter. It’s confusing and can get tense and political. If a shelter fills up, the last thru hiker to arrive has to leave the shelter because we are the only ones allowed to tent because thrus are expected to have a better understanding of Leave No Trace ethics. Even if the person shows up as it’s getting dark, the thru hiker has to get out of the shelter and pitch their tent. The catch is that it goes in order of who arrived last and there can be disagreements. Then there are also thru hikers, like me, who really don’t want to stay in a shelter and would love to tent. So the best strategy for someone like me is to arrive as late as possible to increase the chance of being able to tent. I hope this all makes sense because there is more to come.

As Ace and I hiked up, we got ahead of a handful of thru hikers and knew many more were behind us. We ended up hiking a couple hours with a solo female hiker named Dancer. She was also great and she was the first solo female hiker I’ve met keeping a steady pace. She said she hasn’t seen hardly any others either. She also told us the excitement that just three miles in today, she saw a huge black bear right in the middle of the trail! That is not uncommon and there is a pulley system to hang food bags at each shelter. There wasn’t any big signage that we entered the park and it was just a steep climb up for the day and we’ll stay up fairly high through the Smokies. It rained a bit the first hour, and then was hot and humid to start the climb, and then it cooled off significantly up high. It was underwhelming as Ace broke the news that with the trees still bare, the Smokies will not look or feel very different. Seriously!? More of the same today…. 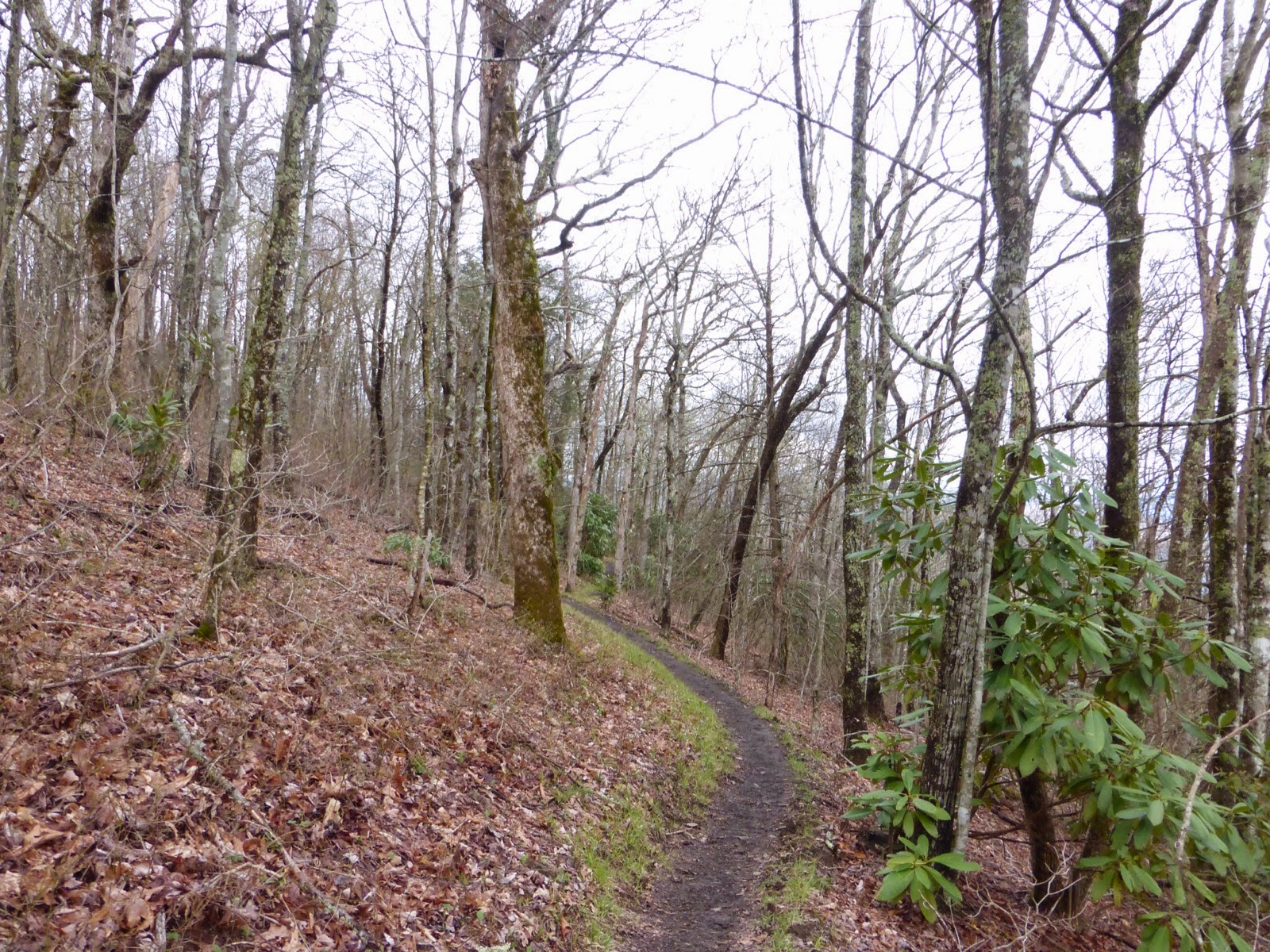 We got to the shelter around 5:30pm and it wasn’t full, dang! It held 12 people and we were the final three. I was NOT amused. Dancer wasn’t either so she ate her dinner hoping others would show that wanted to stay in the shelter and then left to hike another 3mi in hopes of tenting at the next shelter. One person came and took a shelter spot, so I just needed one more to claim a shelter spot. Just my luck that four thrus came and all wanted to tent. The. Three trail maintenance people came who refused the shelter too, but something tells me they are obligated to use the shelter. Point being, I had to get in this shelter with 11 others. Many of whom were already snoring! 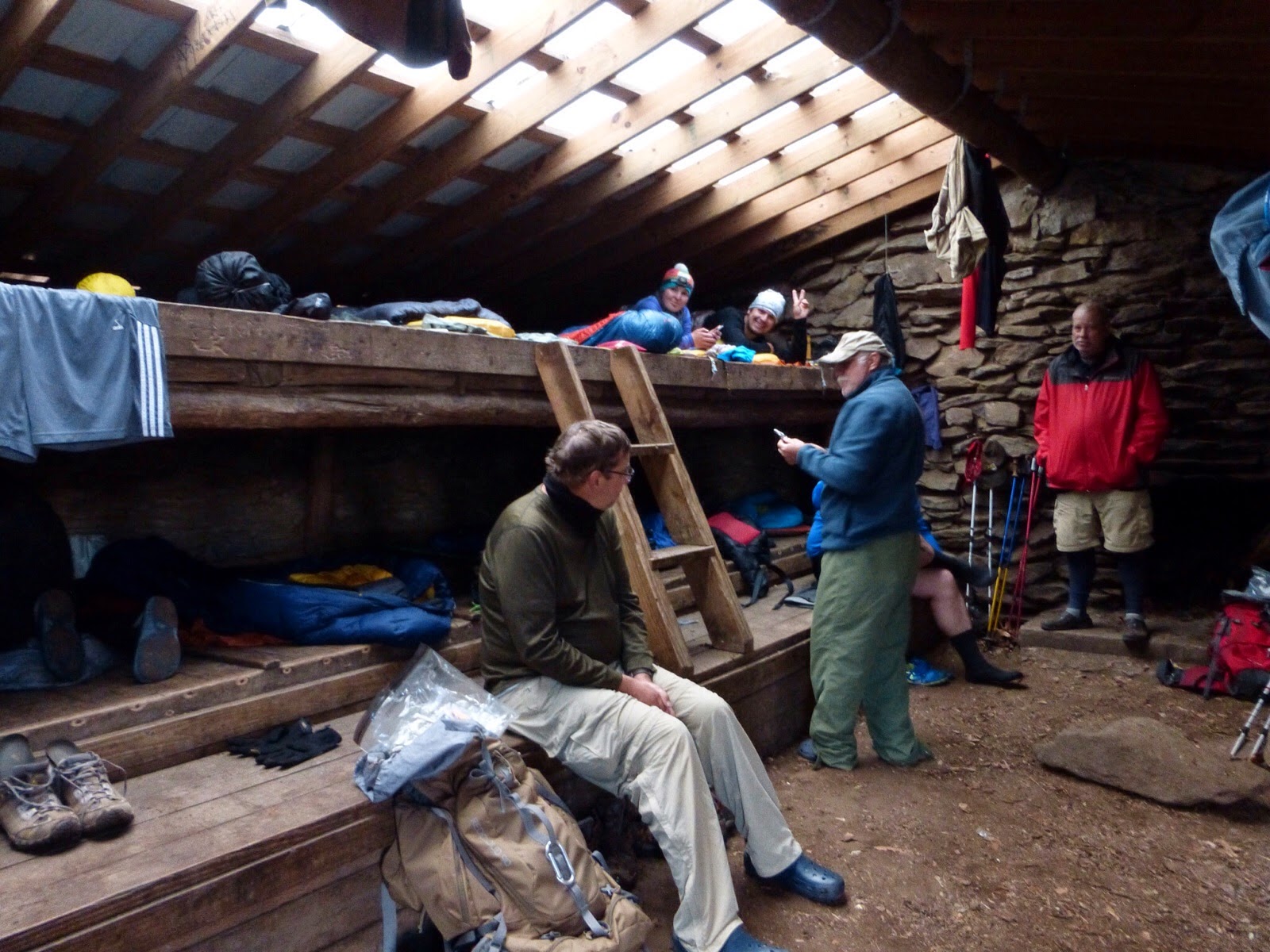 My anxiety and claustrophobia was rising quickly. Someone gave me deluxe earplugs as I heard people comment that it’s just the mice running around that keep them wake. All I could think about was mice, mice poop, snoring, and breathing in this enclosed space with all these people exhaling around me. Around 8pm as I was making final preparations to lay down, a lone hiker appeared and it was a section hiker who, by the rules, has to stay in the shelter. He apologized for being so late and that I had to set up my tent so late and to his relief, I thanked him profusely. Then he recognized who I was. It turns out he was Walnut who I had just emailed this morning! He saved me from the shelter! I love this world! I set up my tent in minutes and was soooo happy and comfy. I got a picture in front of my tent with Walnut who I am so grateful for! 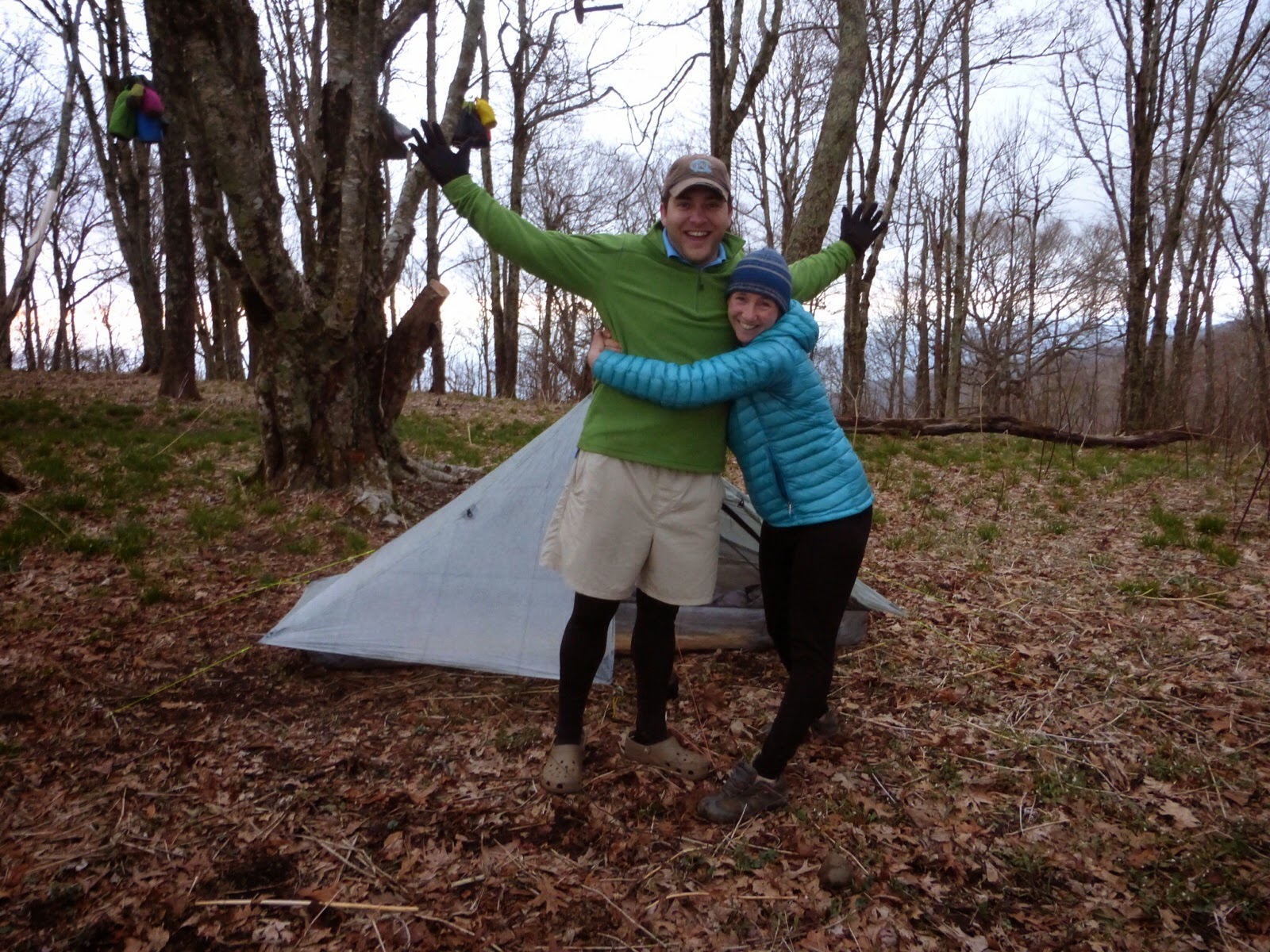 It is colder up here and gusty, but I’m in a great spot and this is my best setup of the tent all trip. In my resupply, I was gifted the softest and most amazing, aloe infused, sleep socks. On day one out here I noticed that I totally forgot to bring sleep socks on this trip and I’ve been using hiking socks. John and Carol, who shuttled me to the start sent me sleep socks along with my iPhone plug that I had left in their car. Perfect timing as it’s in the 30s tonight! I just stepped out to find that a cloud of fog has completely enveloped this whole area and I can only see a few yards ahead with my headlamp. Here are my happy warm feet! 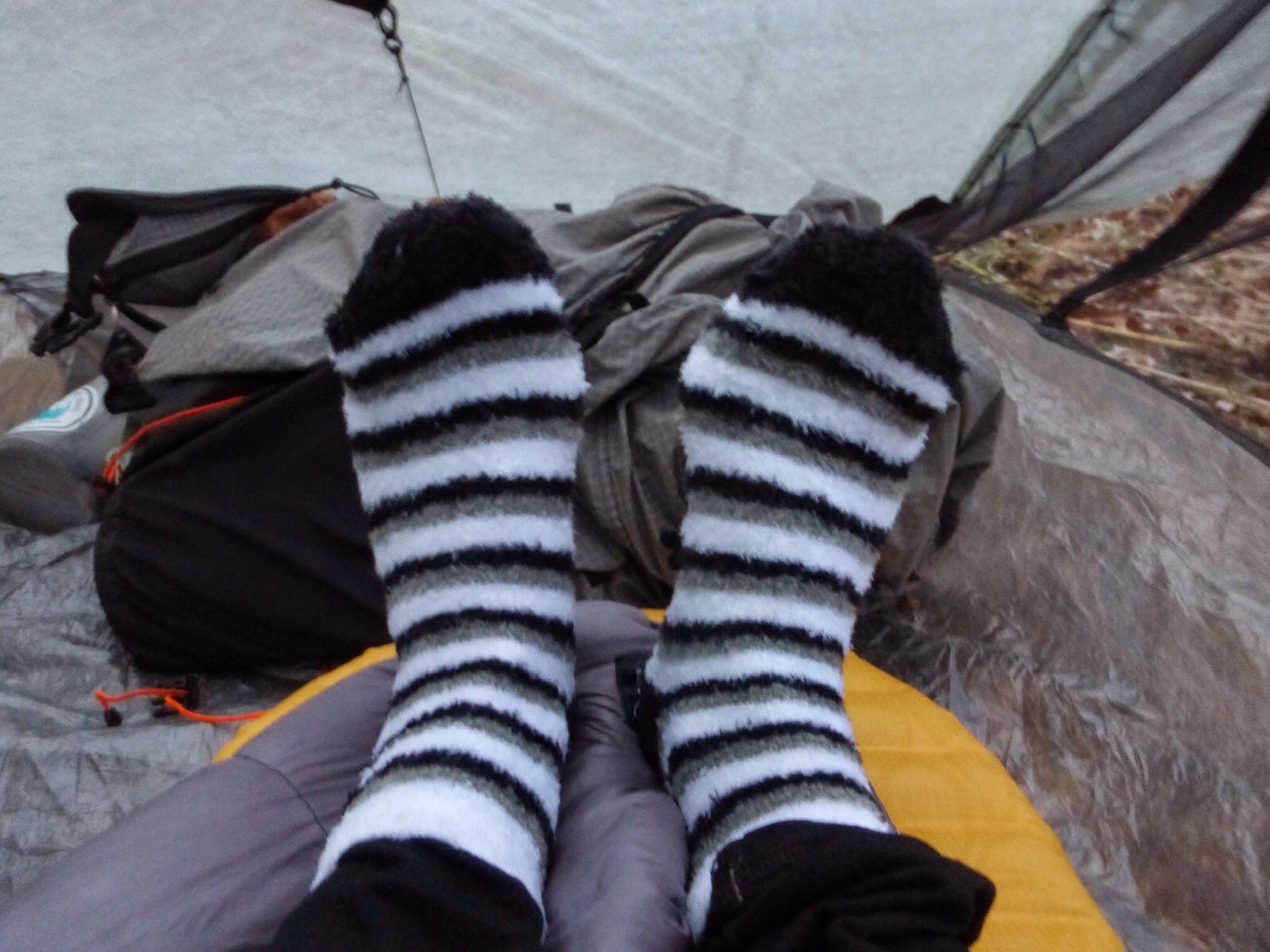 Another note, apparently a few miles back, the trail crossed into Tennessee and it will be following the border of N Carolina and Tennessee for awhile. That’s a bummer that there isn’t a sign cause I think one of us would have noticed it!