Day 100: See The Watery Part Of The World

This is a long entry, but totally worth it…We woke up to a nice cool morning and got our regular 6:30am start. It was an exciting day because it is Day 100 for me on the AT. 100 Days! We each ate a Subway cookie we got from Down & Out yesterday with our breakfast and were very happy to do that. We had an ambitious goal of over 22mi to a campsite, but we felt like we could pull it out and be set up nicely for a nero into town tomorrow. We are more limited in campsites through Maine. It is very dense forest with rare stealth sites that aren’t official campsites or shelters. Last night there were three other thru hikers camped in the same area. Three guys in their 20s named Newts, Bagels, and Stretch. All three were aiming to do a 17mi day today to the next shelter, but we knew that would have us stopping too early. Like most other hikers near us, they started a month before us and they tend to do shorter days and think we are flying. We talked to them about our plans to slow and take it in. Bagels was a very laid back dude (who wears a sarong) and he mentioned that he had found boats along a couple of the lakes and ponds we have passed and highly encouraged us to get out on one if we find one.

Flash forward to this morning as we were in morning bliss hiking and started passing ponds. Jett Cat and I both love morning hiking with how new the day is and how the light shines as the sun is rising. I tried to capture it this morning. 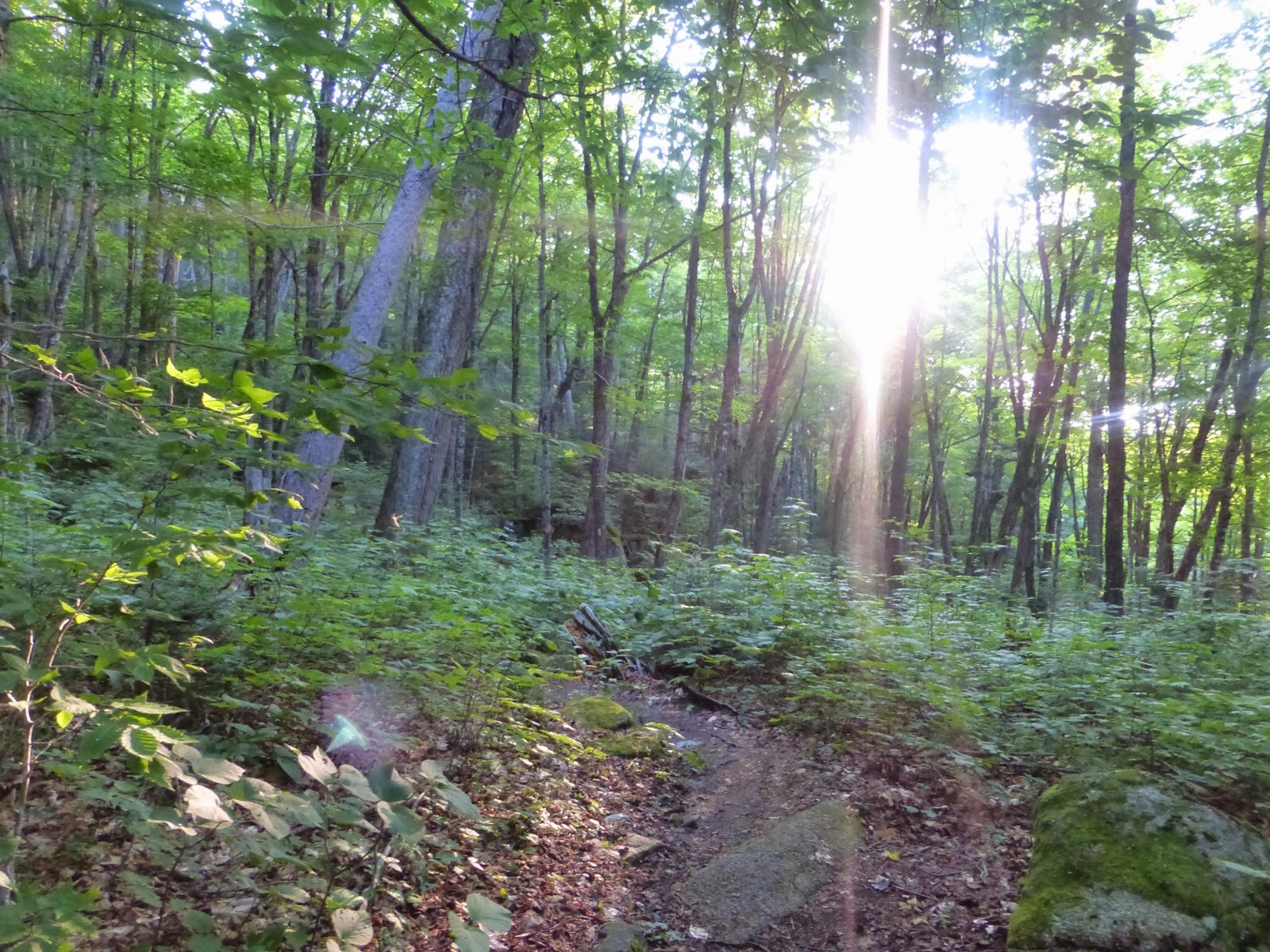 Seeing the ponds, we started dreaming aloud of boats and going out on the sea. Jett Cat is from a small island in Florida and when she was a kid her family even spent 6 months living on a sailboat and sailing the Bahamas. She remembers it fondly and has a great nostalgia for boats. It’s fun to think up outrageous life adventures for the future while on the trail and Jett Cat mentioned one of her own involving sailing. We both recalled the whimsical way in which sailing is introduced in the beginning of Moby Dick because I had recorded audio of little 7yr old Cartwheel(from the Kallin Family hiking the AT) reciting it and we love to quote her saying it because it makes both of us so happy. In particular this morning we were saying, “I thought I’d sail about a little. See the watery part of the world.” If you missed my original posting of the audio of Cartwheel reciting Moby Dick, it is a must listen for pure joy. Here is the link. So adorable!!! So as all of this was happening and we were in our morning bliss, I saw the sun hitting the rocks along a small island in Eddy Pond. We talked about how if it was hot out, we could swim to the island or even row a boat. The AT was a good 20yds off the pond, so I saw a light user trail and paused to possibly go down the trail to take a picture. I checked with Jett Cat saying I didn’t have to do it if she wanted to keep forward momentum, but she was okay and needed to stop to get something out of her pack anyway. So we took the small detour and the trail weaved to the shore to the most magical moment when we saw a row boat! It was like it was out there just for us at that very moment. 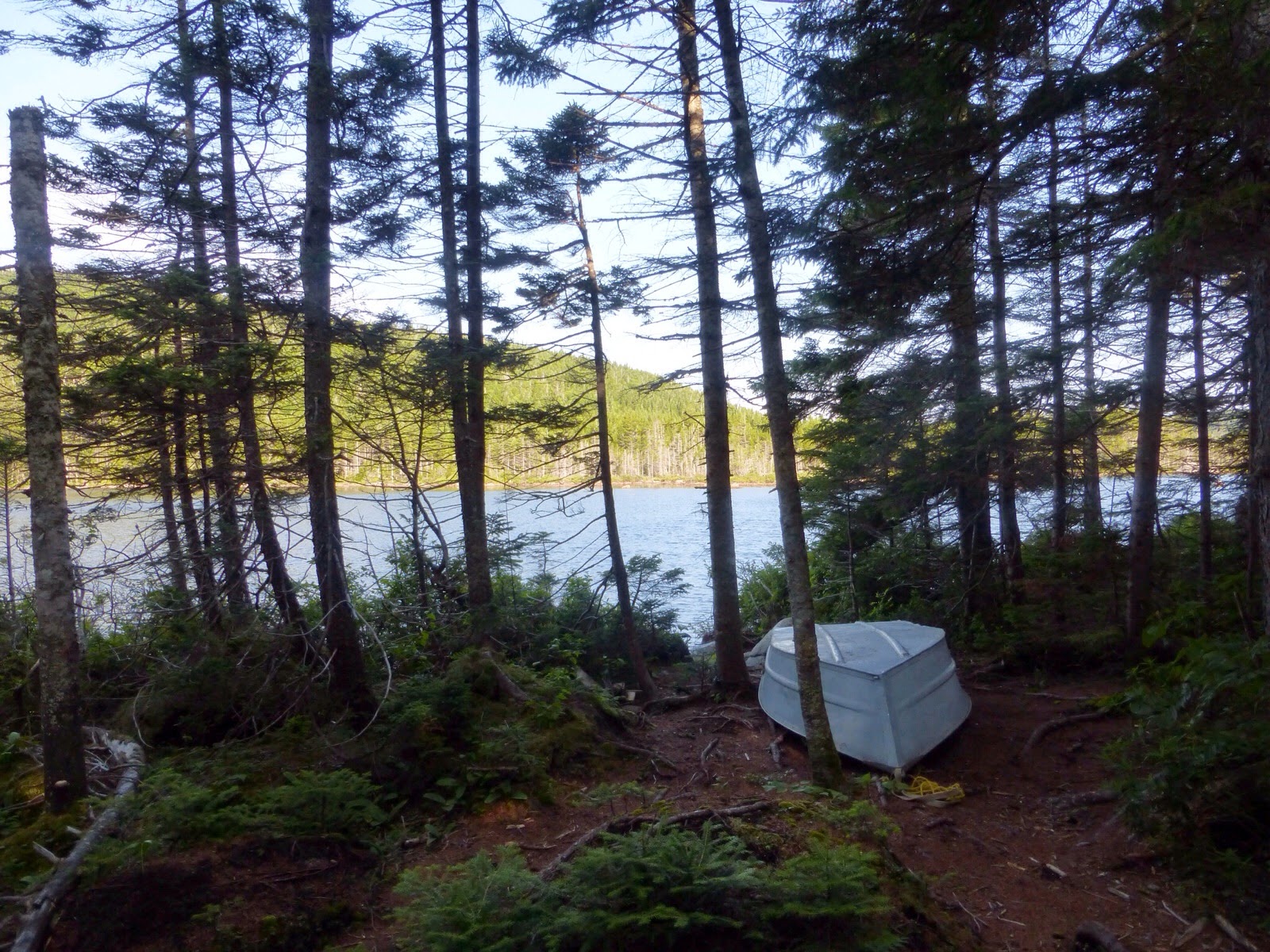 We just had to row it to the island! We got all ready to sail our and grabbed the boat in excitement and found that it was chained and locked to a tree! It was such a bummer after we had gotten so inspired and psyched. We hiked on dejected and 1/4mi later the trail started to turn away from the pond. I sadly turned to go up the hill and Jett Cat saw something in the woods along the shore. Another row boat and it wasn’t chained to anything! We were so happy! I hiked back and got the oars to “borrow” from the other boat and we got in the boat to set off toward the little island. As we did, Stretch hiked up and got our picture. Perfect timing! 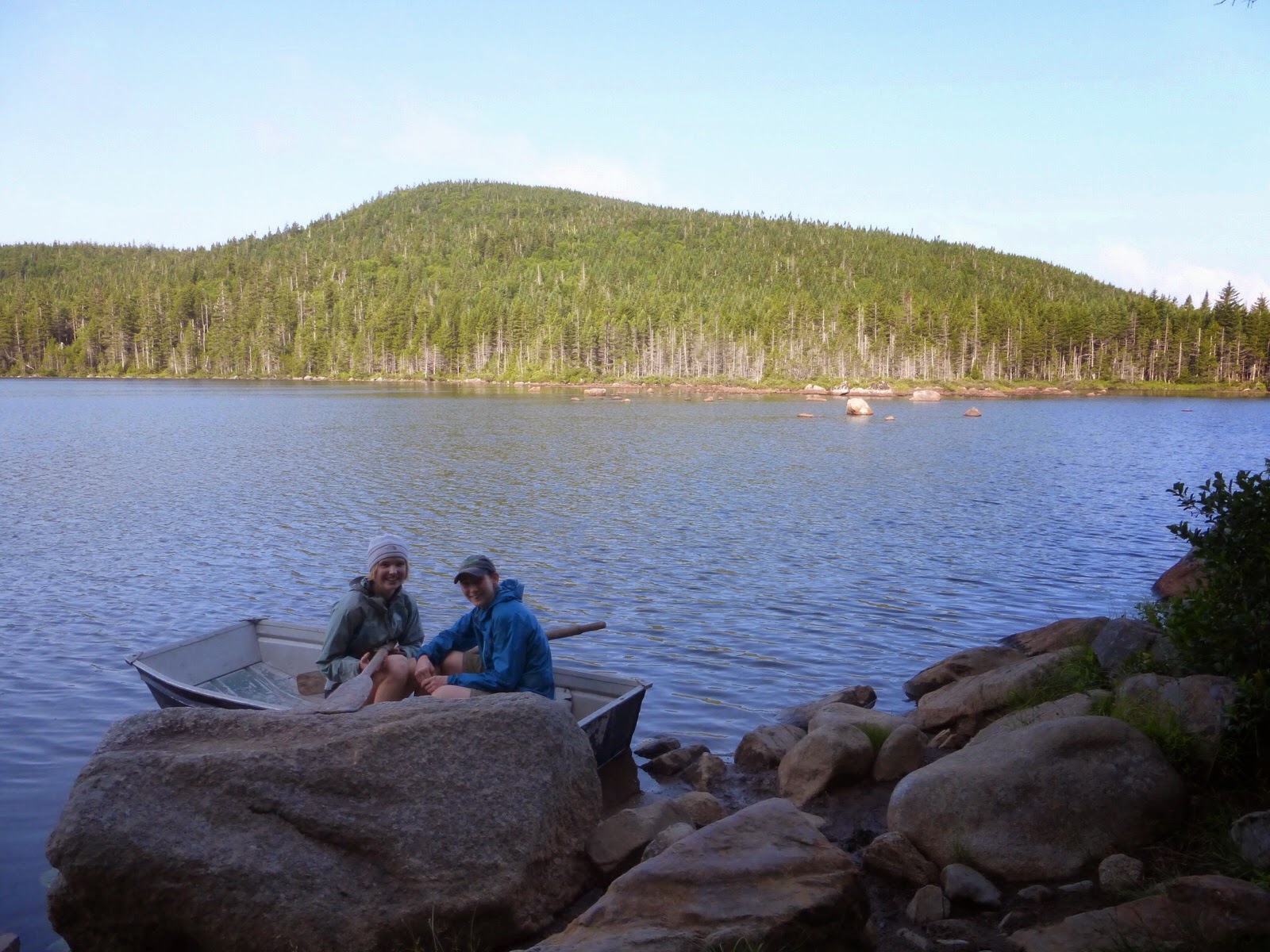 Jett Cat used her GoPro to take a photo as I paddled toward the island. We were so happy to be seeing the watery part of the world. We loved how the morning sunlight was shining too. 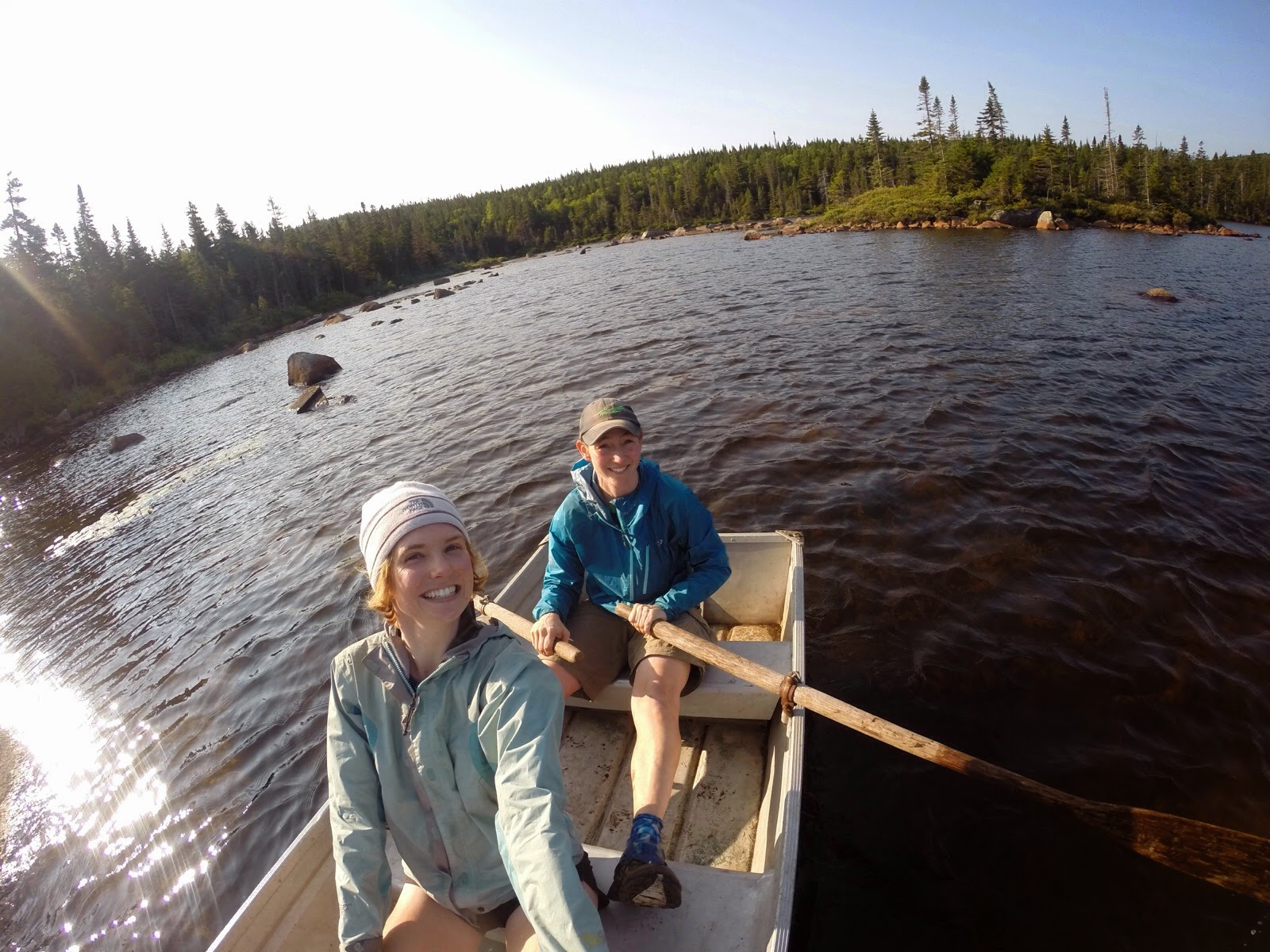 When we got there, we got to lay on a big rock in the sun and just take it in. We could have laid there all day and it was quite heavenly and relaxing. We laughed accepting that we were probably accepting a 17mi day to the shelter and it didn’t bother either of us one bit. 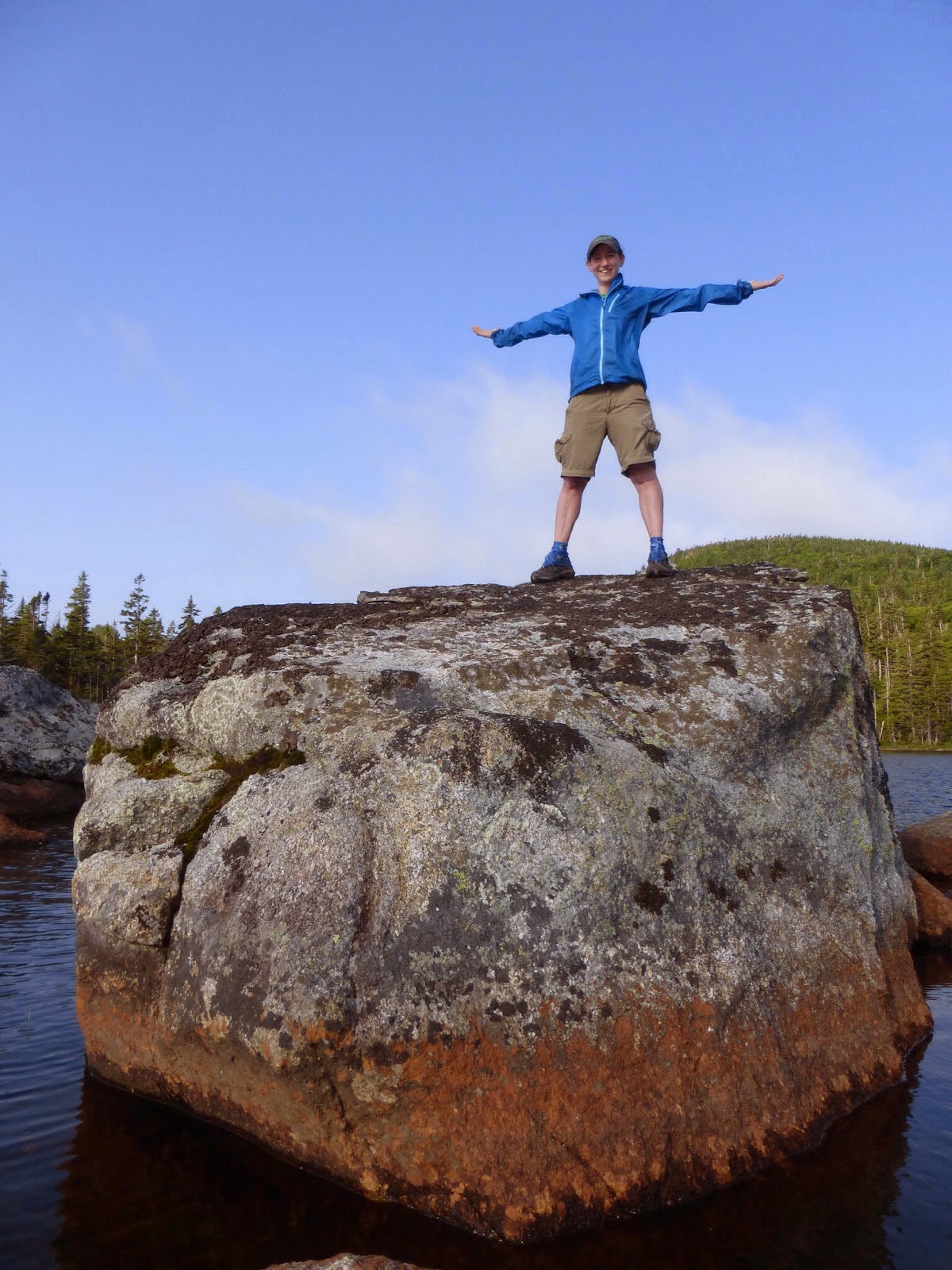 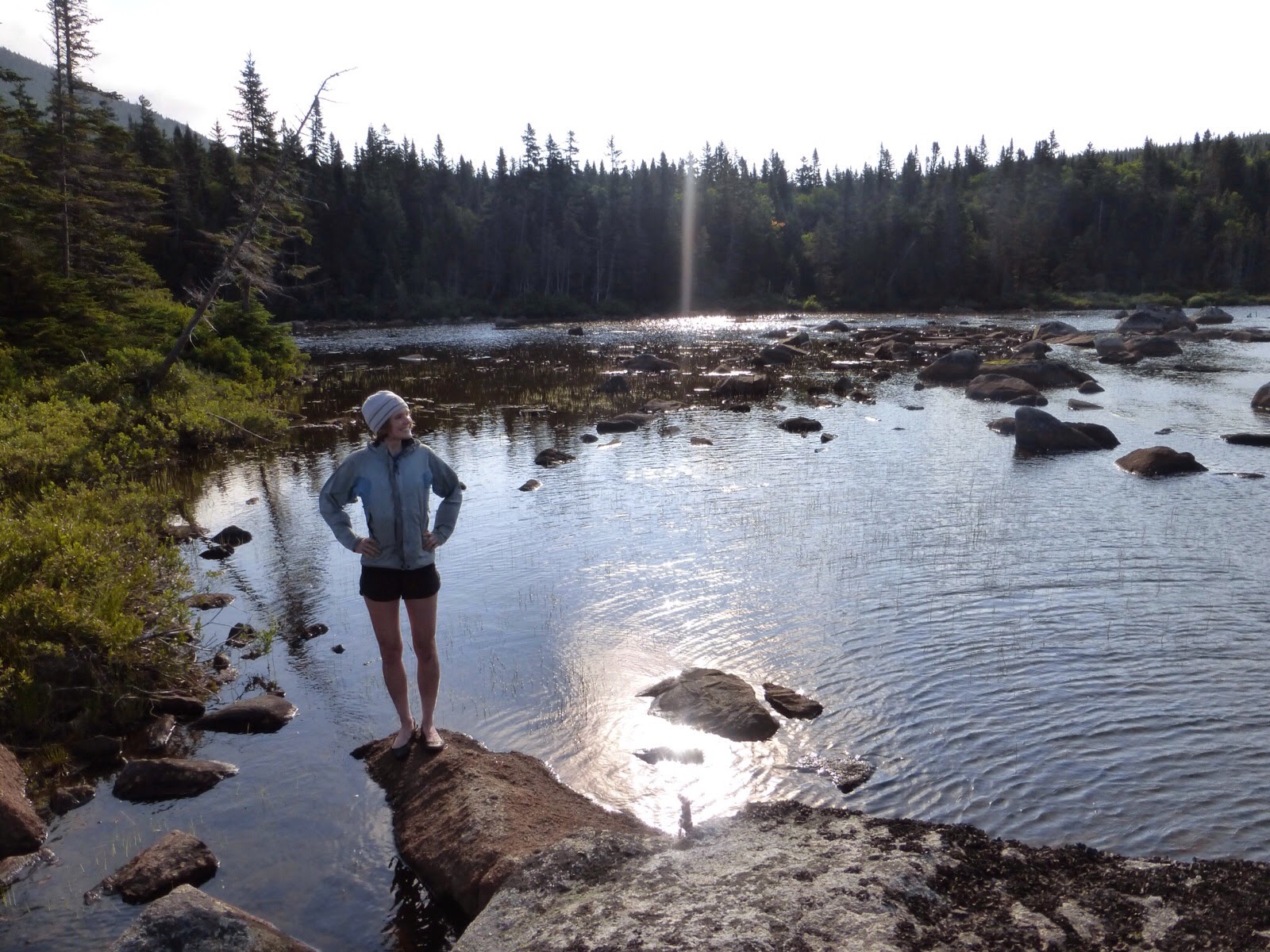 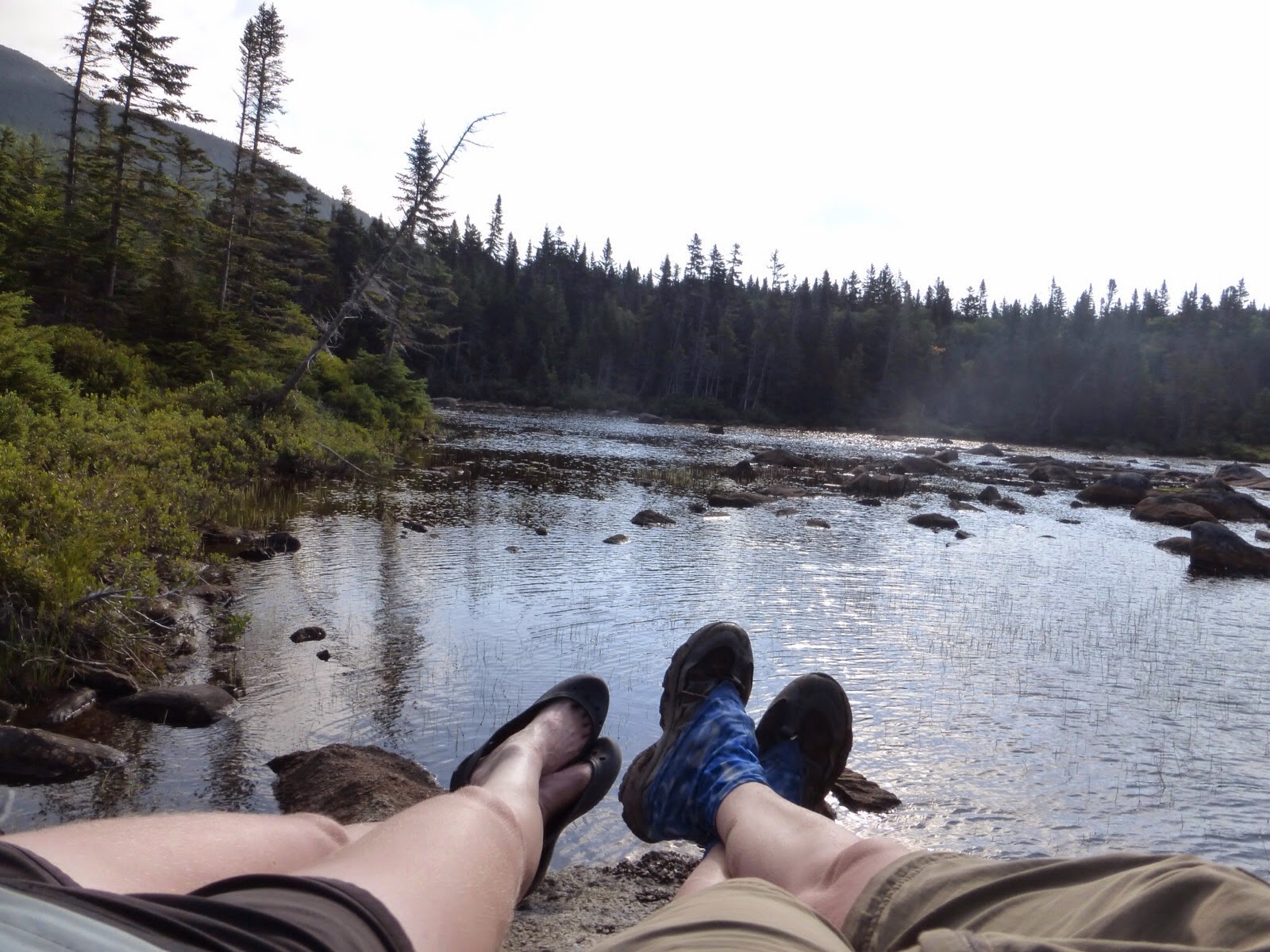 Jett Cat paddled us back and we were hiking after at least an hour detour. So worth it! We then hiked up to Saddleback Mtn, Horn Mtn, and Saddleback Junior. LOVED the flat rock ridge walking with panoramic views and perfect weather with a cool breeze. We could even see Eddy Pond down below. 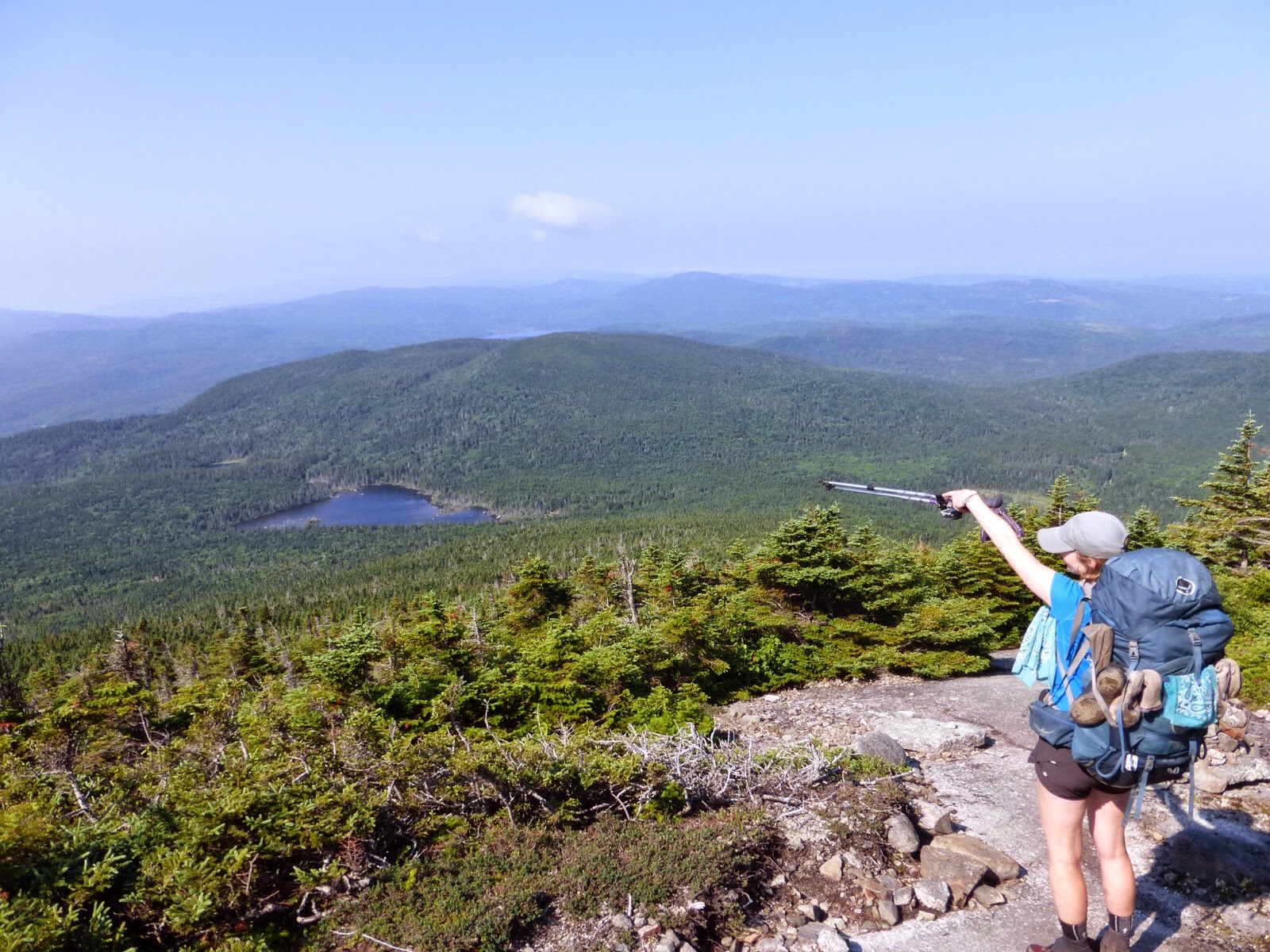 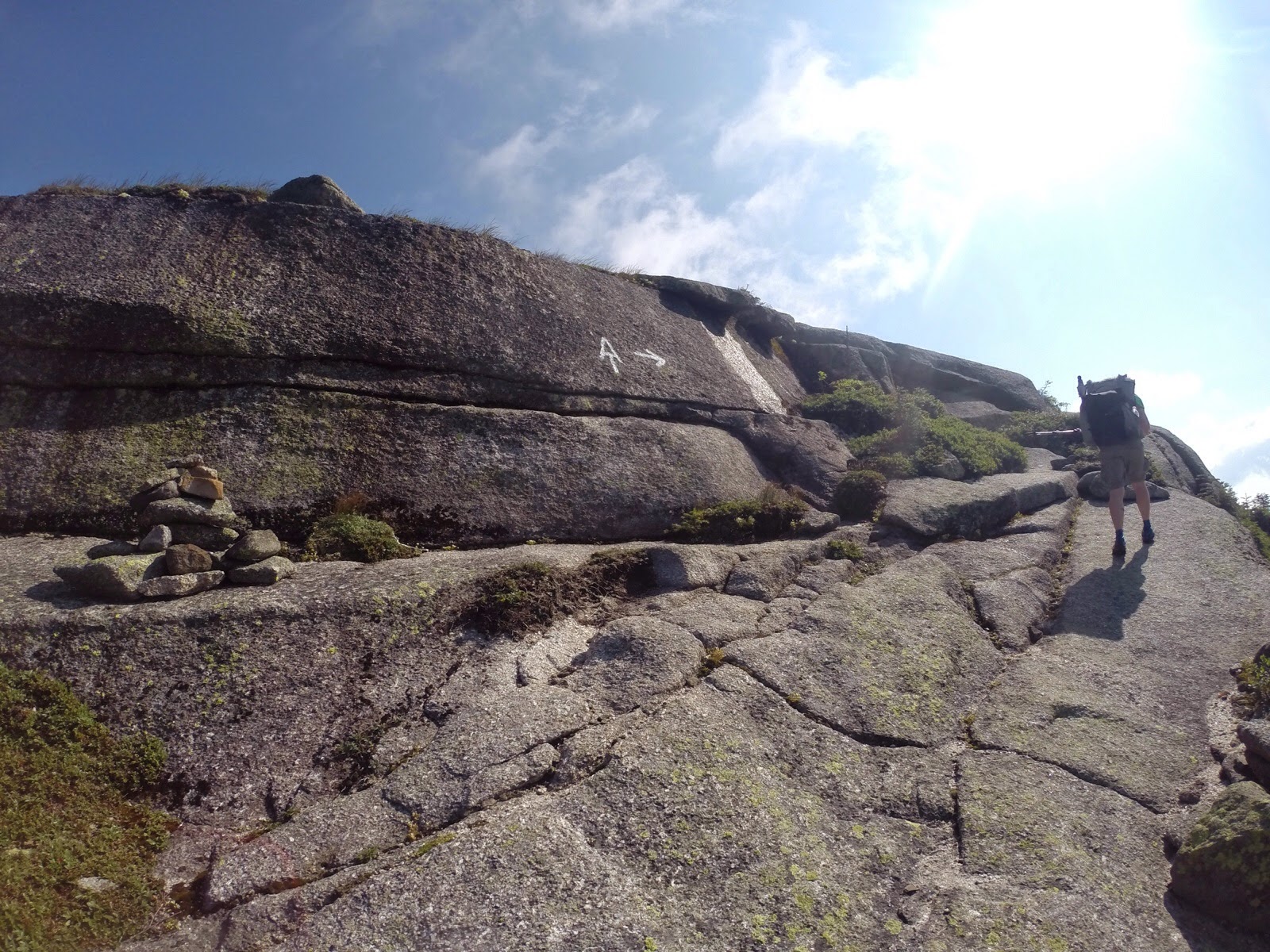 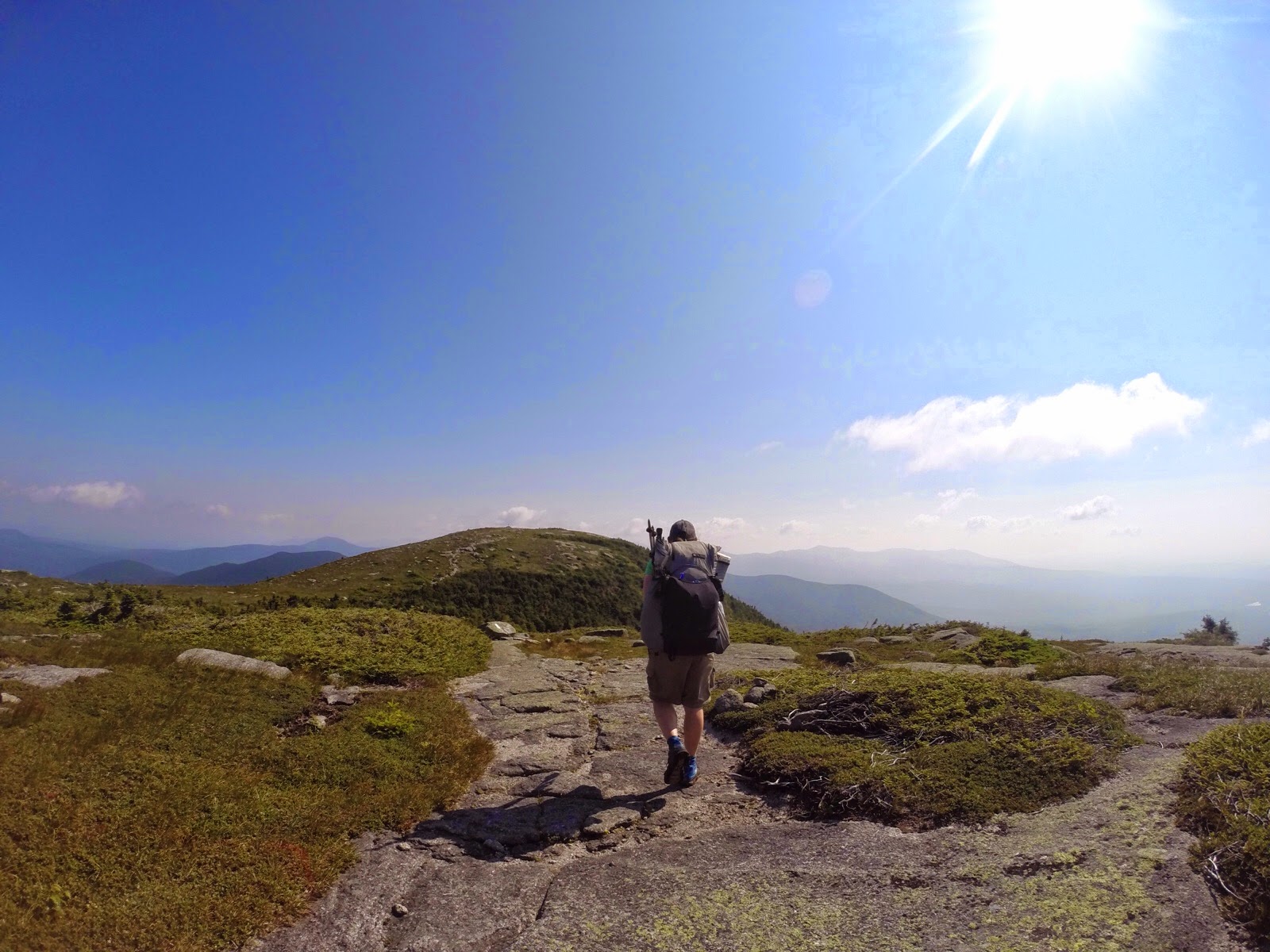 There was a good deal of slick steep flat rock so it was slow going and by lunch we had only done 8mi and we had to laugh at how little we care about the mileage. We had a great lunch along a stream and ate the second half of our Subway sandwiches and cookies. THANK YOU Down & Out!!! 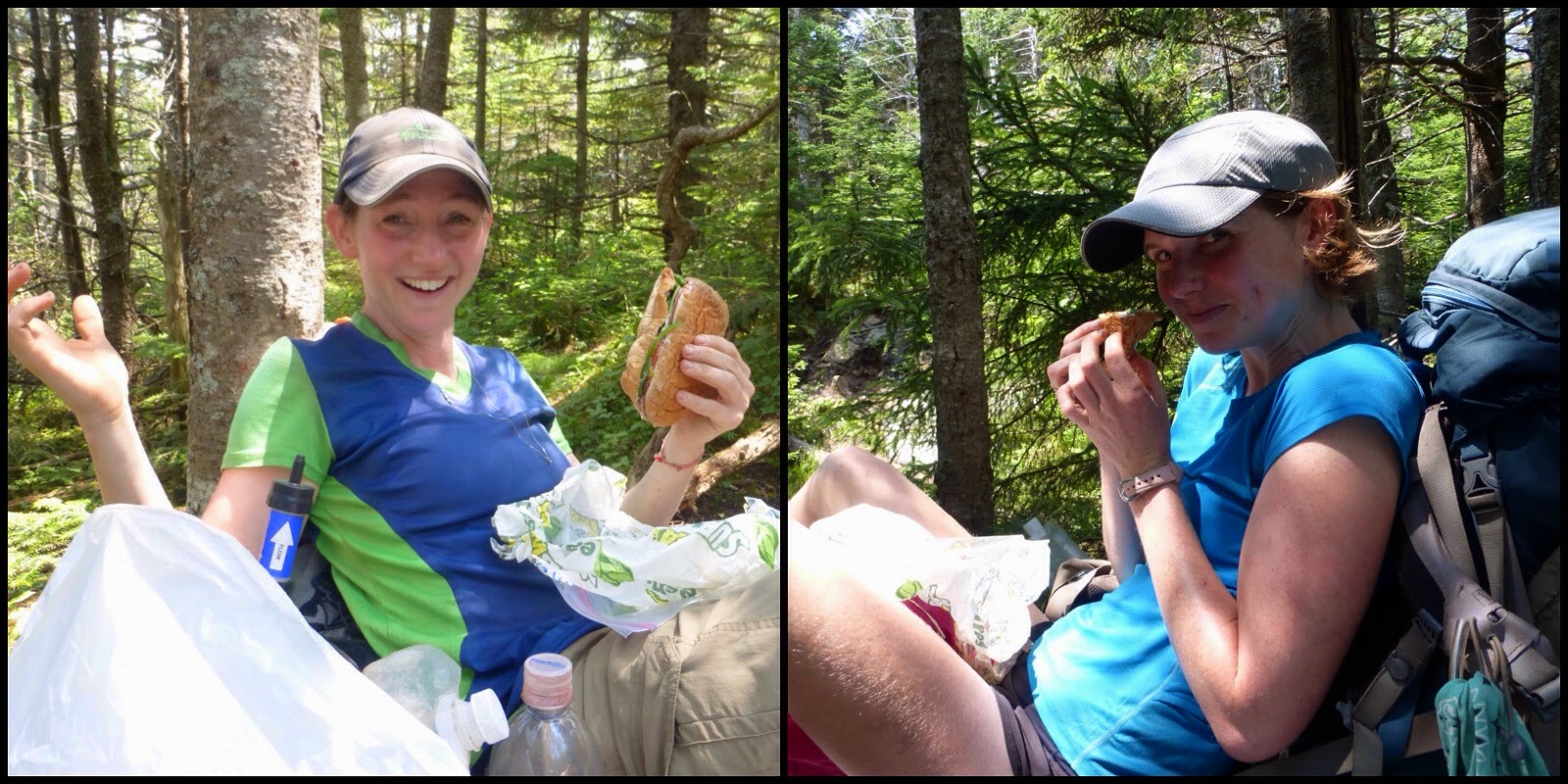 The rest of the day had forested hiking and it got a bit hot and muggy. Both of us were sluggish and the trail was rocky and rooty with some steep ups and downs that allowed for little cruising. 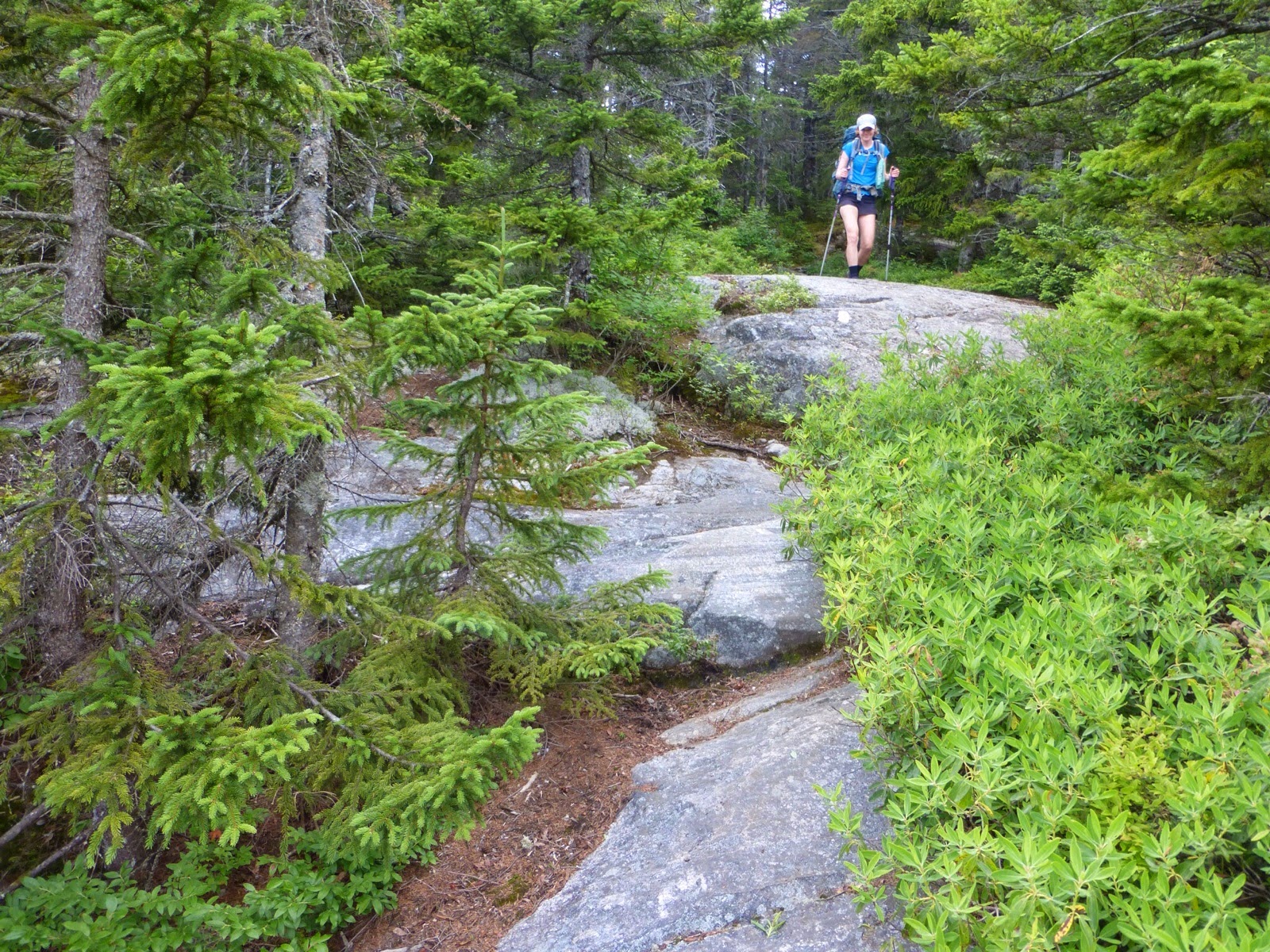 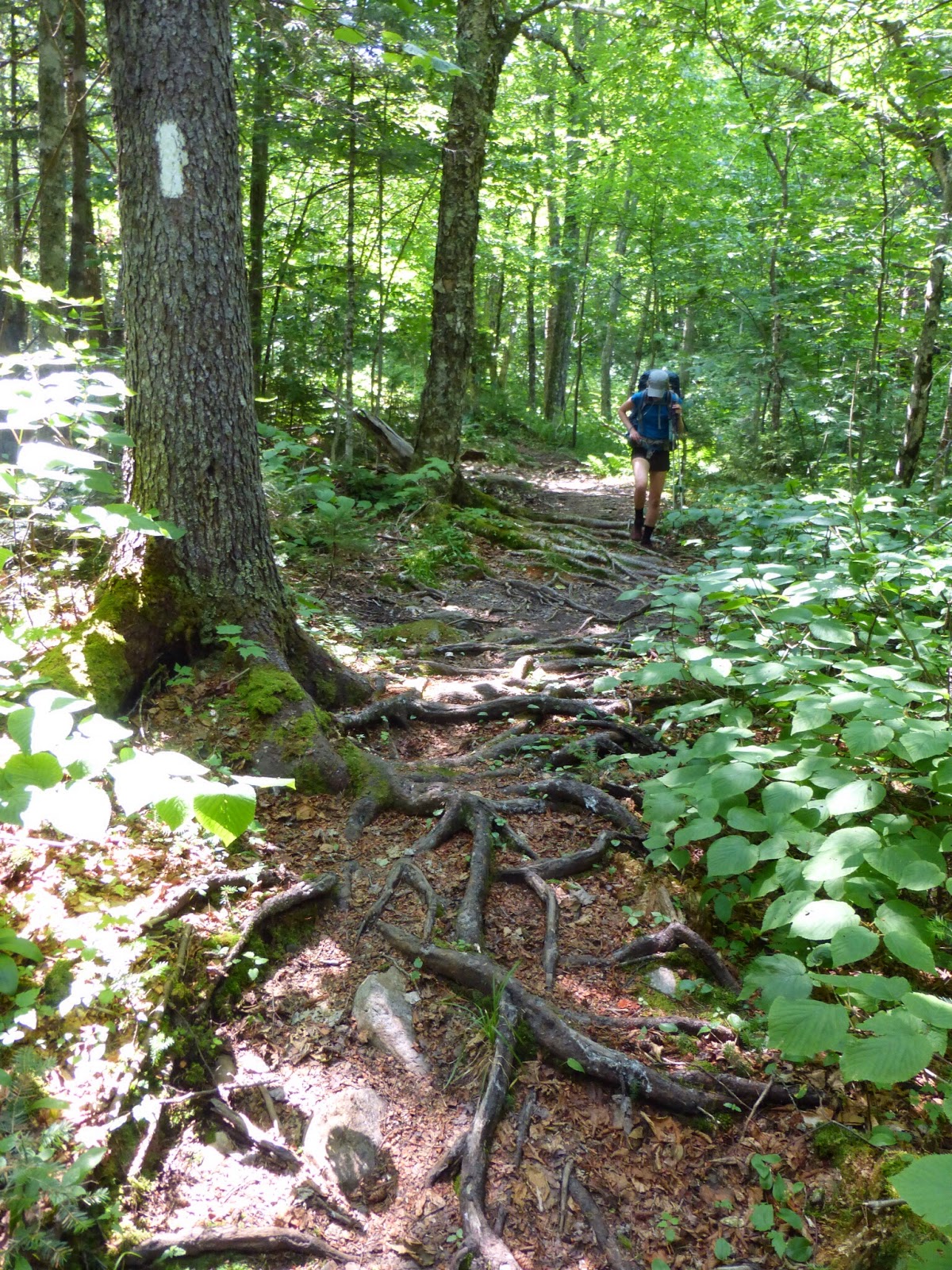 We felt like we weren’t doing much, but just kept a fair pace and we ended up doing ok. We hit the shelter at 5pm and decided to just gamble and see what stealth camping we could come across if we hiked another hour or so. We ended up passing a great spot that was a few minutes before our water source. When we saw there wasn’t camping near the source, Jett Cat got the water for us and I headed back so I’d have time to blog about this awesome day! The wind picked up and it cooled significantly, so we ate from my tent which was positioned to block the wind and it was the perfect comfy way to end Day 100. We also noticed that we are now just 199mi from finishing, ahh! 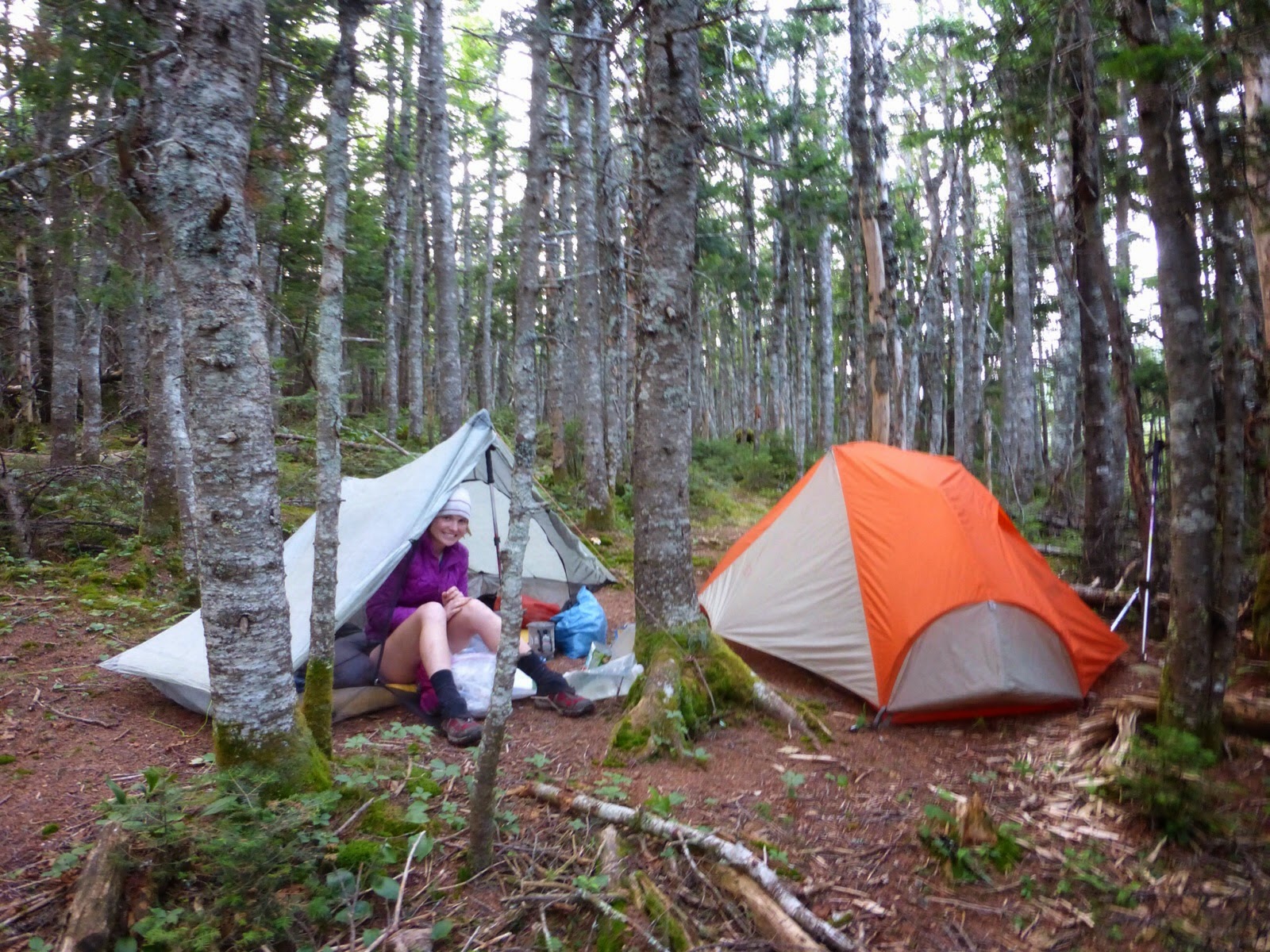 So as if this day wasn’t great enough, we got a call from the Kallins after dark and they were in town and able to Skype with us. We got to bring the day full circle by telling them how Cartwheel inspired us to “see the watery part of the world.” What a great day and the perfect way to celebrate my 100th day on the AT! 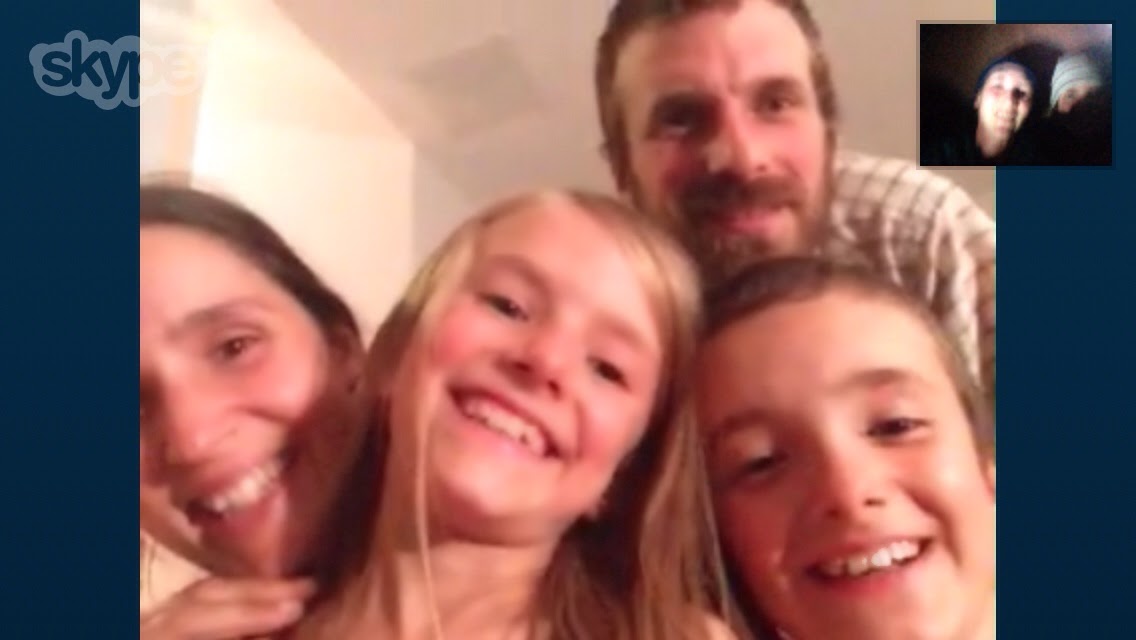