May 19th
Hwy 385(879.2)-Short Creek(890.6)
11.4mi
I was up til midnight last night getting blog stuff done in the hotel and woke up without an alarm at 5:45am. Hurricane and the Roadway Inn are the perfect place to zero! Sooo tempting! Very affordable, everything is right next to the hotel, the library was great, and we had a great dinner last night that included a great unlimited buffet for $10 each. I can’t recommend Hurricane, UT enough for the final town stop. I wanted to relax more this morning, but with the half day we lost from the weather last leg, we ended up still making it into town yesterday (on our goal date), but we lost half a day of rest arriving in the evening rather than the morning. The way the hike out worked today, we had to do about 11mi to get through an uncampable area. Working backwards, I knew I wanted to start the road walk by 3pm to reach the camp spot by 7:30pm. Plenty of time, right? Again, it’s amazing how fast time in town can go.
I was up and got to do a morning Skype with my nephews who also just woke up. They were excited to show me something. The 3yr old, Lucas, is obsessed with labeling and packaged food. He doesn’t want to eat it, but he wants to collect every type a given item and organize it by categories based on the packaging. One of his favorites are Clif Bars! I don’t think he’s even ever tried one, but he’s obsessed and collects them like baseball cards. He just recently got his first poster up next to his bed…a printout of all the types of Clif Bars! Lucas couldn’t wait to show me and also brought out his bucket of Clif Bars while I showed him which ones I had with me. Even little 1yr old Aidan got in on the action. I’m so proud! Some future backpackers in training if you ask me! What a great way to start the day! 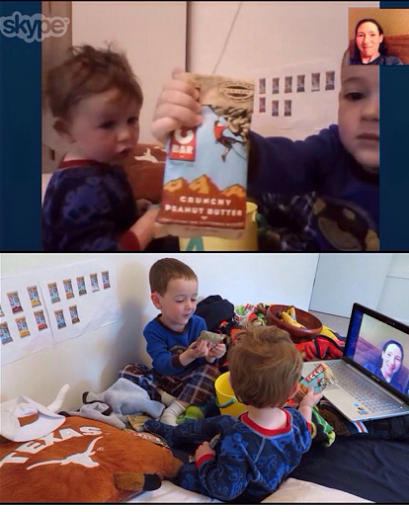 The library opened at 10am and I wanted to at least get to a computer for a couple of hours, so I ate a bunch at the hotel continental breakfast and then walked down the street to do my only full resupply from the store on the Hayduke. I usually send boxes, but knowing this was a short leg, I figured I’d just shop in town and it was quite easy since I somehow had leftover bars already from last leg. Gavin has a different town approach that involved more sleep today and again has him rushing at the last minute to get things done…not easy for me who can’t stand not leaving on time, but now I’ve come to expect this. He wasn’t even sure he’d make it out to start hitching by the 1:30pm time I was aiming for, so I let him know I was going regardless. Since he doesn’t have the purist need to do every step, he could just skip some of the 9mi of road walking I’d be doing to give him more time…seemed simple enough, but he still wasn’t sure he’d make it. While I was at the library, Gavin went to resupply and met me at the library to tell me he couldn’t buy his food because he lost his wallet and phone! Man, I swear I must be contagious with losing stuff. Poor Gavin! He’s had this happen before and was able to make calls on my phone quickly to get everything back in order. I’ve never heard of MoneyGram, but it was a cool thing a he was able to get cash for what he needed to resupply and get out of town. We weren’t sure if he’d make it to the camp spot tomorrow or maybe just catch up the next day, but I had to go to keep the itinerary we have for the last leg. The way water and camping is, we have a pretty set schedule I’ll elaborate on tomorrow.
While Gavin was using my phone at the library, a woman named Laura overheard his dilemma and approached me and offered to pray for us. She asked about our situation. Laura and her husband Doug gave Gavin a ride back to the grocery store and dropped me off at the road where I needed to go. Laura and Doug were just wonderful and I’m always surprised at how much people are willing to help complete strangers. THANK YOU Laura and Doug!!! 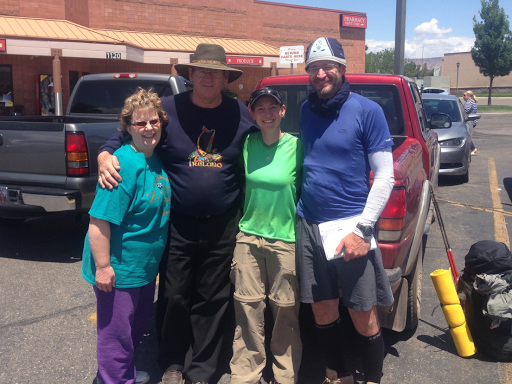 On the ride out, Laura told me more about the town of Colorado City. It is an alternate route for Haydukers, but just adds a few miles to experience a town created in 1985 by the Fundamentalist Church of Latter Day Saints (FLDS) to have its own laws that include allowing polygamy. Laura was raised there and now lives in a neighboring town, but her sisters still live there. Laura was put in an arranged marriage when she was 19yrs old with a man as old as her father. She was not happy and was able to leave and now is with the Church of Jesus Christ of Latter Day Saints. She said that the town has changed a lot in the last few years since their leader, Warren Jeffs, was imprisoned for sex with an underaged girl. Laura says maybe 1/3 of the town is still FLDS and the rest are more modern and not as extreme. It was interesting to hear more about the town from someone raised there before I walked through.
Laura and Doug dropped me off on the main highway and I had four miles to walk before turning into Colorado City. Funny thing is I really liked the highway walk! It was 70F with a nice breeze and great clouds to add to the scenery. There was a humorous thing by the road that had some kind of spacecraft and porta potty with a sign about UFO docking and teleporting to Uranus…I hope it was a joke… 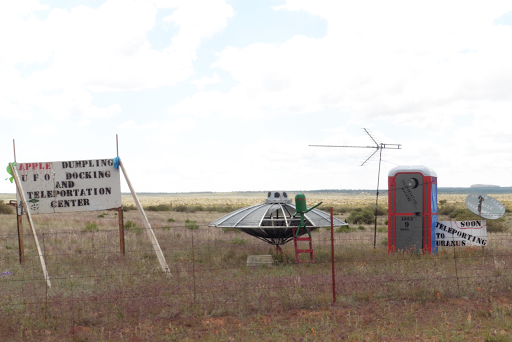 I turned on my music and was in my own world. This is a popular alternate that adds a few miles, but people do to experience Colorado City. I noticed something across the highway and it was three teenage boys riding on a wagon with two small mules pulling them. We exchanged a few words and they asked if I wanted a ride. It was really tempting, but I was sticking to the walking…and was even faster than them at times, ha! 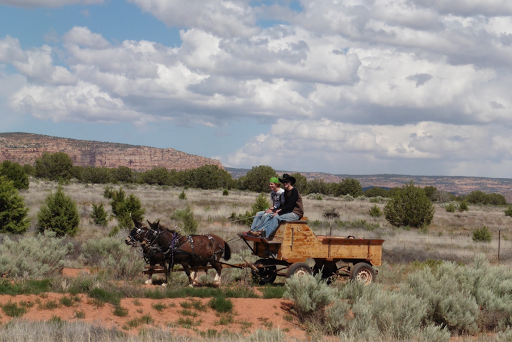 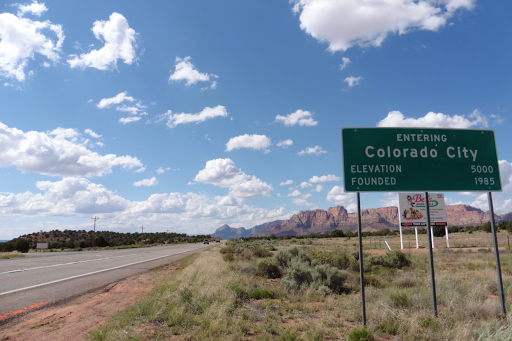 I turned on to the main street of town and followed it for an hour or more. It was much make modern than I’d heard described. There were stores from time to time, and the biggest thing seemed to be a lumber and supply store. It was pretty quiet and I saw people from time to time mostly if they were getting in/out of a car or driving by. No one was just walking down the street. All the homes had a compound sort of feel with high metal fences around them and NO TRESPASSING signs. Almost every car had tinted windows. Many of the homes (that I could see) had Zion posted above the front door. 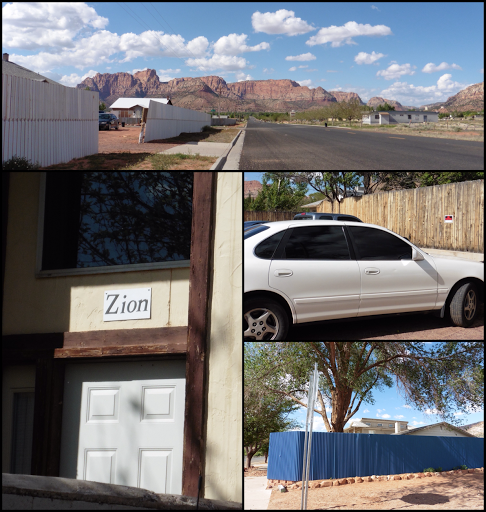 The few people I saw definitely recognized me as an outsider and did not go out of their way to say anything. The most startling reactions came from the boys up to about the age of 10. They would stare at me unabashed as if I had two heads and they didn’t know what they were looking at. They weren’t subtle about it and I even said hi to some thinking they’d be embarrassed and look away and they just kept looking. I also noticed that the drivers in many of the cars seemed to be underaged boys. One honked at me when I first entered town. Everyone was dressed modestly to cover their skin with boys/men wearing slacks or jeans with a plain colored buttoned up collared shirt. The girls/ women had long sleeved dresses of mostly one color all the way to the ground and hair pulled back. Many of the cars and trucks that drove by were packed to the brim with kids.  As I got to the end of town, Gavin caught up to me and I was glad that since I was getting to a more remote area. He had someone drop him off partway into the road walk, so he missed 6mi or so, but probably walked just that much in town dealing with his lost phone and wallet. Soon after we rejoined, a woman stopped to chat with us that was on a bike that was obviously not a town citizen. She was an artist from Australia that was in Colorado City for her 2nd of 10 days and she was hoping to blend in and eventually create art after she left. She said she’d been camping outside of town and was not comfortable and wondered if she could camp with us. She had approached some town members and they were not open to helping. Once I gave her Laura’s contact info, she left and returned to her own site hoping that might be helpful. We both weren’t sure how to feel about that whole experience as it felt like it did impinge on the privacy of people who obviously don’t wish to be publicized, but she said she’s traveled the world doing this and focuses on societies in which women and their rights are marginalized.  It just seems like a fine line there of truly caring about what was happening vs exploiting something unique for personal profit…just one last thing that left us both feeling a little yucky as we left town…
We hiked through the next town of Hilldale and didn’t notice a difference other than that the big metal gates weren’t there. There was a dirt road that led to Short Creek and we wound back a bit. About a mile in, we came across a family of about 10 (mostly kids) that were pretty cute in a Little House On The Prairie kind of way. I asked and they weren’t comfortable with their picture being taken. Not sure what they were doing out there, but they all had something like a shovel, basket, or tall walking sticks. We walked another mile to the fork with Squirrel Creek. We were both a bit skiddish, as the area was covered in footprints and it seemed like an area where not everyone taken out would return….but it was a nice scenic spot and we think we got far enough out. Quite an experience though. 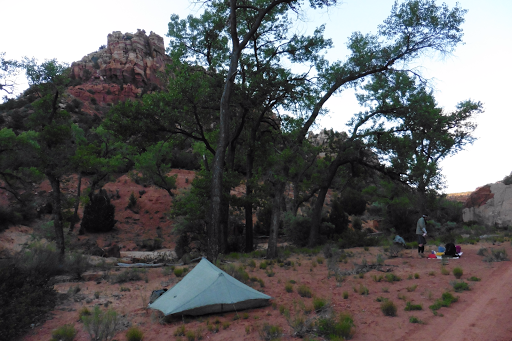