This morning, we entered the Whitegoat Wilderness. We got to spend an hour or so hiking with Ted and that was nice to be with another GDTer for awhile. We may not see him again since we have different itineraries moving forward. We came to one of the few registers along the trail and saw that Gian and Laura, who we met Day 1 are less than a day ahead.  Maybe we will see them before they finish at Robson in a couple weeks. Fun to have a little community of sorts. 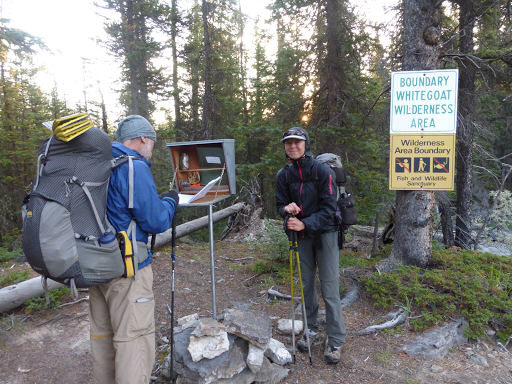 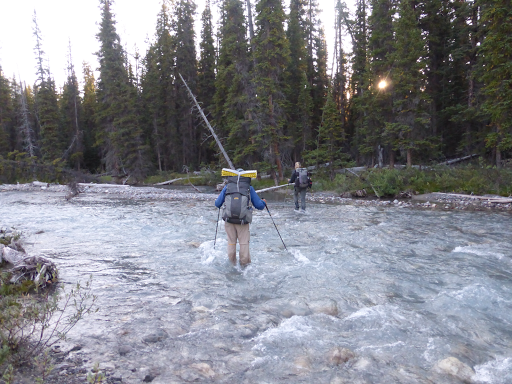 We’d heard this Whitegoat Wilderness section had a lot of blowdowns. Last year, Zdenek counted 488 downed trees over the trail in this ~9mi/14km section. A couple we came across yesterday had gone through it the day before and said it seems to have been cleared a bit since the last time they did it and that the ones left are mostly easy to step over. That gave us hope that it wouldn’t be as time consuming as we had planned, and that there was far less brush than we anticipated. That combo of downed trees and brush are not fun, so it’s nice to have one at a time rather than the double whammy. They were right. The downed trees ended up being minor and we were able to step right over most of them in stride.
From there we slowly ascended until we hit tree line where we needed to turn at an unsigned and easy-to-miss trail junction. E was waiting until the final trees to dig a hole and we agreed I’d continue hiking the short distance to find the junction and wait for her there. Neither of us have a photo of the area of this junction, but this was taken shortly before and gives you and idea of how it looks. 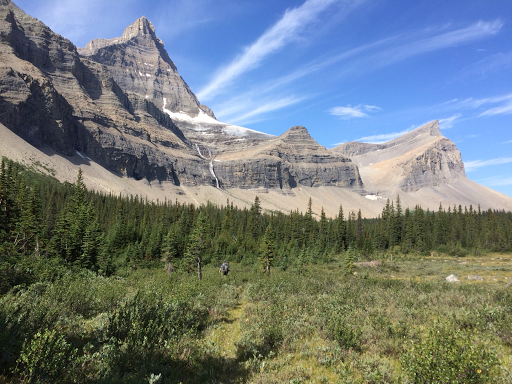 As soon as I walked away from her, I crossed a stream and the trail got fainter because it is an area that is dug up by grizzlies. I soon hit a faint junction with two little stones that seemed like cairns. I followed it a bit to see if that was the right turn and it disappeared. I figured I’d cross country back towards E and when I went back, she was gone. I went in circles calling out for awhile until I decided to head to the next waypoint. I read notes that said cross countrying down to Cataract Creek was the best option, so I did that and went on to the next waypoint figuring E might be at the confluence…nope…I had lost E…I waited a bit and decided to head on to the pass we were headed to figuring she’d do the same and not knowing if she was ahead or behind me. I just felt bad that I wasn’t sitting at the junction like we agreed, but then again, I wasn’t sure if I was on the right trail or junction or whatever  to begin with. I hiked on up Cataract Creek, towards Cataract Pass. 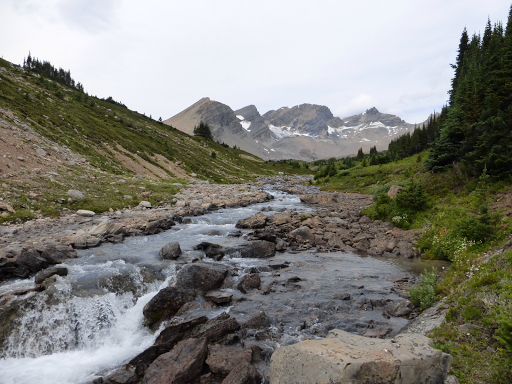 I kept pausing every so often to look back and also saw no footprints other than Jian and Lara’s, so I figured I was ahead. Soon after taking that photo above, I saw E ahead of me and she was looking back the same as I had been. Turns out that when she hiked up trail after digging a hole, she went further than the turn I made and came to a junction with “E II” written in rocks. She thought it was from me and took the turn. When I wasn’t there, she went back to the junction and waited, worried it meant that I too was digging a hole because of the “II.” Eventually, she did exactly what I did heading to the confluence to wait and then deciding to
head for the pass. Overall, it was about an hour of confusion until we found each other. Lesson learned from this…when splitting up, don’t try to meet at an unsigned and easy-to-miss junction in woods (that’s literally what the waypoint is titled)…where it is recommended to go cross country because there is no trail…because grizzlies have dug it up, ha!
We had lunch along Cataract Creek as a good reset to the day and headed up to Cataract Pass. It was pretty barren and rocky. I liked the unique stripes in the rocks. 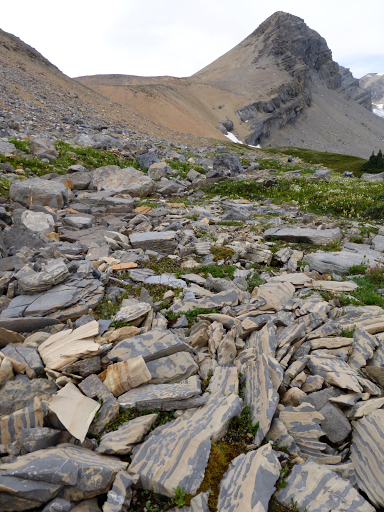 Here’s a photo I took looking down on E(by the pink patch) on the climb up and she took a photo of me at the same time looking up the pass. 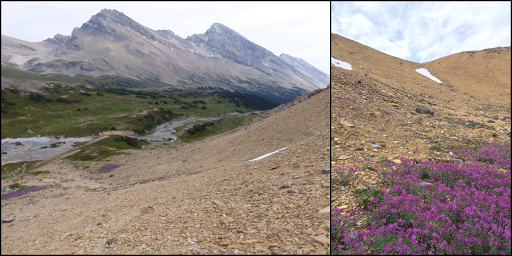 The path was straightforward and cairns were there to indicate which direction to head as we reached a sort of false summit. 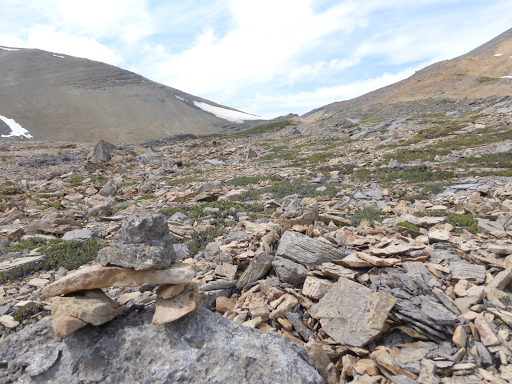 Once up on top, we were officially in Jasper National Park! It was a bit chilly and I had a thought to put my beanie on. Then it hit me, I didn’t have my beanie!!! When asked what items I haven’t lost or would be crushed to lose, that beanie is always near the top of the list. I think I’ve had it for close to 15yrs. My stomach immediately hurt. I remembered that, while hiking this morning, I had taken my beanie off and stuffed it down the front of my raincoat. It’s become my routine on this hike to keep things dry to stuff them down the front of me. Problem is that I have to remember they are there when I unclip my pack so they don’t fall out. Well, this morning I forgot. With how often we take coats on/off on this trail, I’ve gotten in the habit of taking off my jacket as I hike without stopping. I did that, and my beanie fell out, and it was just hitting me. My only hope was that Ted was just behind us when it happened, so I messaged him through the InReach and also left him a note on the trail. We will be in the town of Jasper at the same time, so I really hope he picked it up. I’m sooo bummed it might be gone! I have a buff I can use until I get to town. I just don’t want to even think about it and hope Ted has it. As we came down Cataract Pass, we could see the amazingly scenic valley we’d be going through. It was quite the sight! Tons of photos were taken. 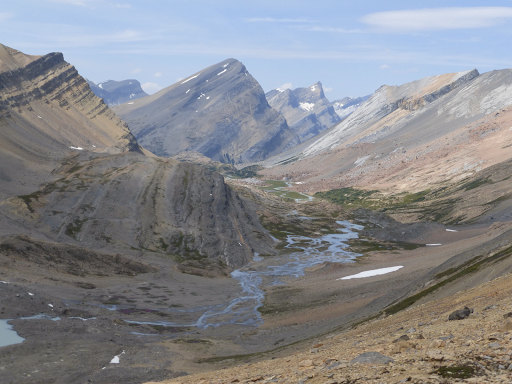 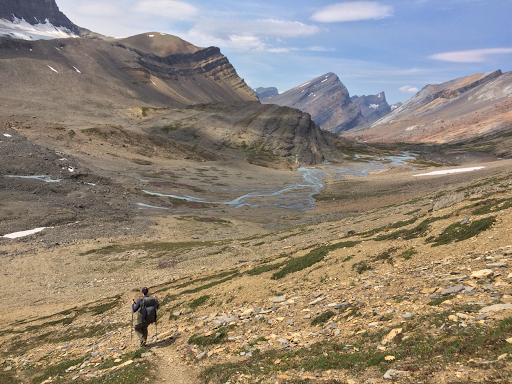 We totally loved it and only saw one other couple day hiking in there (there’s a side trail that easily leads in). It was a gradual down along the aqua blue Brazeau River for about an hour as we relaxed and took in the open trail. One of my favorite spots all trail. 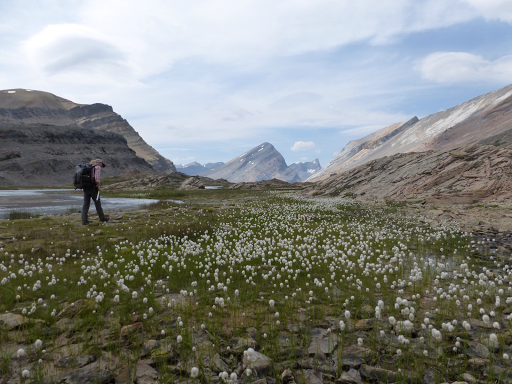 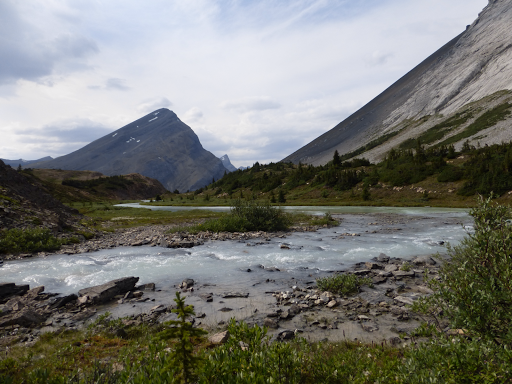 We saw what we think are young and/or female bighorn sheep and watched them graze for quite awhile. It was tough to get a shot of them looking up with how intent they were on the grazing. 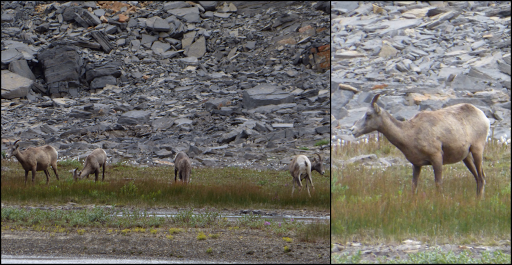 We realized we had plenty of time and took an extended break just to sit along the path and take it in. This is where I realized that I’d also dropped my Chapstick somewhere. At least that’s something I carry a backup of. Just not my day…From there, it was more of a gradual downhill along the Brazeau to a bridge and then Boulder Creek Campground by 6pm. We had the whole campground to ourselves through dinner. We had to pull water from the silty Brazeau, which shouldn’t be bad, but I’ve been trying to avoid it with how sensitive my tummy is. A fun group of five arrived after dinner. We chatted with them a bit and two of them have been seriously contemplating doing the GDT next year, so that was cool too. As a bonus, they are headed out tomorrow and one of them had a charger, so I was able to top off all my devices with what he had left. I’ve been conservative with my usage this long leg and now I can be more liberal with my music and nightly shows if I get a chance! Dark clouds have moved in as the day progressed and rain is expected for the next three days…dang. 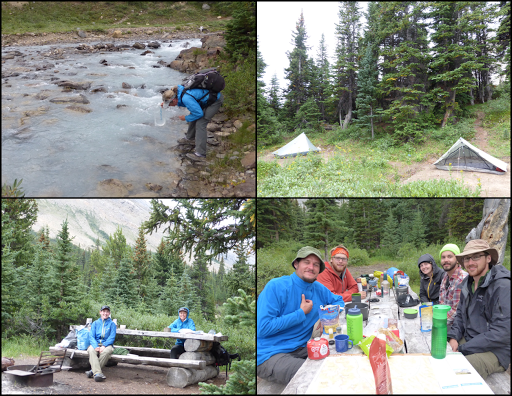