Note: Since writing this post, some changes have been made and the follow-up post is, “One Step Forward, One Step Back.“

Ok, I rarely use this blog for this type of post, but this is one of those unique situations where I’ve given it some time, and I can’t let this one go…In June, I was excited to be interviewed by Backpacker Magazine (along with many other solo women hikers I mostly know) for an article they planned to publish for women wanting to learn more about solo backpacking. Totally something I’m obviously in support of and have plenty to thoughts on! I was clear in my interview that I wasn’t comfortable with the distinction of women vs men and that I felt my thoughts were universal for anyone wanting to solo backpack, but understood this “article” would be part of a grander push in women-centric pieces aimed at getting women outdoors. This is still the ripple effects of the movie and book Wild and I get it. They have to do what sells and women outdoors is what’s trending right now. I may slightly cringe every time I see anything catered in that direction, but I get it and if it helps to get anyone out on the trail (not just women) I’m a proponent.

Well, awhile back, we found out the piece didn’t make the cut for paper print and that there would be more of a push online for these women-centric pieces. The hope was that online, it could get the full length and depth it might not have gotten in print. This month’s edition of Backpacker Magazine did come out with a feature on Women & Backpacking and it was nice to see that many things did make the paper copy. Online, Backpacker Magazine has been posting some of those articles and others that are solely online. Some of the things being posted by Backpacker Magazine through social media have been disappointing, and some have really rubbed me the wrong way with what is being used to grab people’s attention. I think these speak for themselves as here are some examples of things Backpacker Magazine posted on their facebook feed this week… 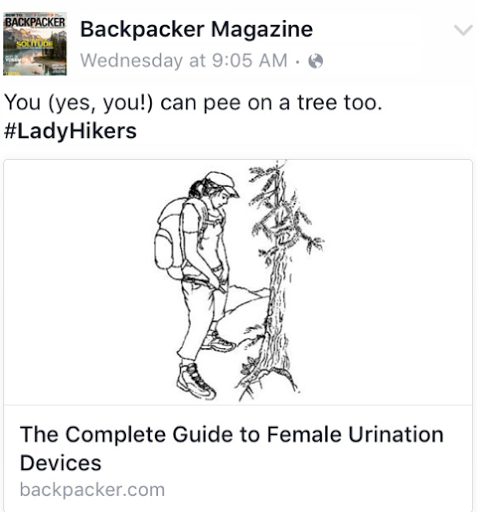 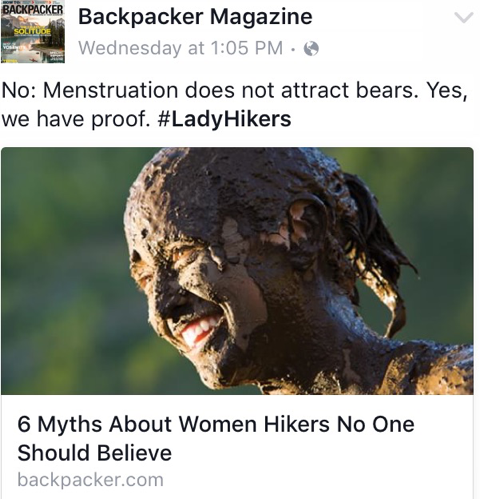 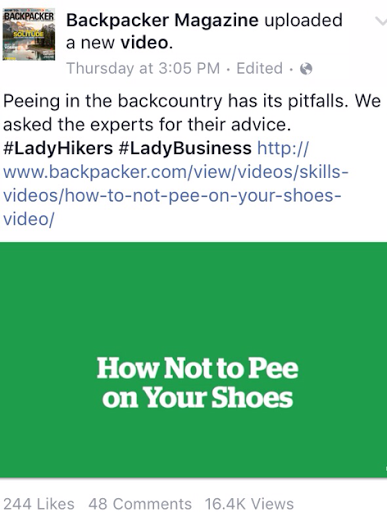 You get the idea. Kinda juvenile don’t you think? This is how women are expected to be taken seriously, right? I can’t quite put it into the proper words other than to say that seeing posts like this leaves me feeling more embarrassed than empowered as a woman wanting to backpack. I understand there is a whole range of audiences they are attempting to reach, so It’s nice to see that they do balance the marginalizing type posts with more quality content posts like these. I want to commend Backpacker Magazine for posting these more respectable articles and point out that it isn’t all making me cringe. 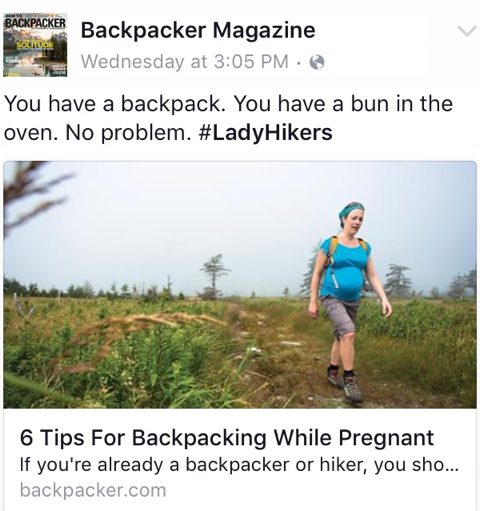 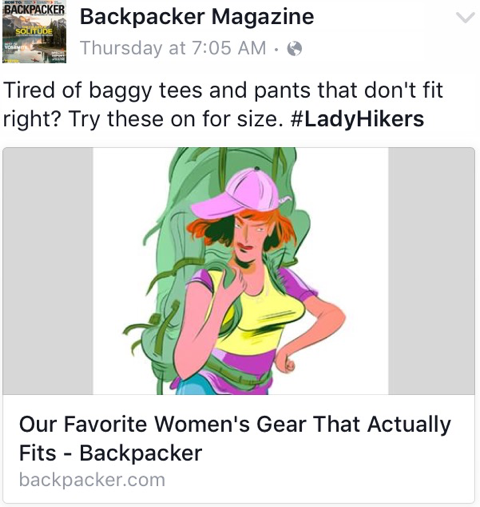 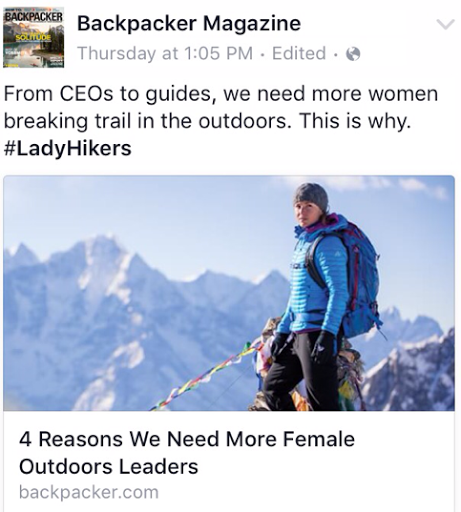 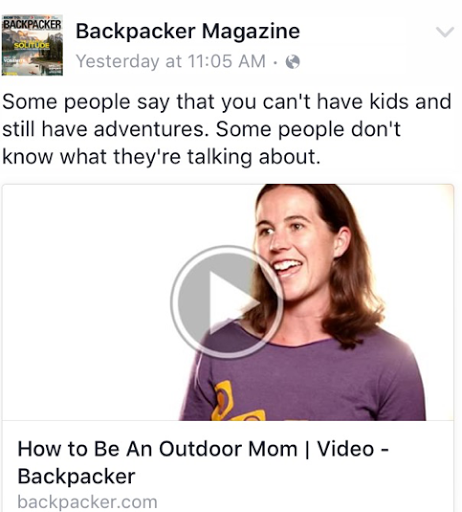 So unfortunately, which of all these posts will stand out and be remembered when someone is doing a scroll through Facebook? Yeah, you get my point. In the end, they are playing the game of social media and I get that they need to have attention grabbers. The thing is, that there is little quality content actually helping women get out and backpack. Case in point, the first article about women peeing in the woods…2,000 words. The “article” on how to get out and solo backpack (that I was interviewed an hour for)…7 quotes. Do you see my frustration? It boiled over yesterday when I saw this video from accomplished outdoor women about how not to pee on your shoes when you squat outside…
Nope, this isn’t a joke…Some people (including women) sat around a table somewhere and said, “Hey, let’s interview some of the most amazing female leaders in the outdoors today!” Then someone else must have said, “Yeah, and let’s show them how much we respect them by asking them serious and insightful questions!”…and someone else said, “We should totally ask them how they don’t pee on themselves!” Seriously, this is the first thing they produce!? Seriously!? I know I’m not alone on this one and it’s embarrassing for the women who were surely interviewed about a whole range of topics other than their peeing method. Not surprising that it was viewed 16.4 thousand times and only has 244 likes. More groundbreaking videos are sure to be on the way, so I can’t wait to hear how they all put their pants on in the morning because I’ve been having a tough time with that one lately.
I hope my point is being made and I don’t want to beat a dead horse. I was excited to work with Backpacker Magazine, but I sometimes question the direction they are headed and what they are thinking at times. It seems that they have lost direction in the last few years and are struggling to find a foothold. They have a platform for reaching a broader audience and getting people outdoors. I think a responsibility comes along with that. What shocks me most in this is that the editors and writers on these seem to be mostly women. How is this happening? I felt that the “article” I contributed to could have been a great resource for so many women (and men) wanting to try solo backpacking and it was reduced to a few tips. Helpful tips, but so thin in content.

I saw online that many of the Facebook responses were expressing my concerns as well., so I contributed my thoughts along with fellow article contributor Ashley Gossens.

After posting this, an editor for Backpacker Magazine reached out immediately and we spoke on the phone. I want to make it clear that there was nothing but good intentions on the side of Backpacker Magazine and that they just lost their way a bit on this one. They didn’t intend to insult, marginalize, or demean women in any way. Somehow, they did lose some of the quality content and are wanting to rectify the situation by revising the 7 Tips From Female Solo Hikers*. [*Note: Since this was originally posted, the article has been revised.] The revision should be made this week to have more lengthy and quality content AND will include the links to all of us women that contributed so people can explore more on our individual sites. It will probably still refer to us as “long distance divas” which produced a cringe for me, but I know it was intended as a compliment. I appreciate that Backpacker Magazine was willing to reach out and I believe in positive reinforcement. I want to speak up when I feel that something is wrong in my gut, but I also want to commend them when they step up and use their platform in a positive and motivating way with quality content. I look forward to seeing the revised version and will post it when it comes out.

The point of this discussion is not solely to vent. I think everyone should be held accountable for what they post and that it’s ok to call it out when it isn’t appropriate or sends the wrong message. The hope is that this discussion, and others like it, will lead to more quality content for both women and men wanting to get outside. Note: Here is the link to the follow-up post to this, “One Step Forward, One Step Back“.